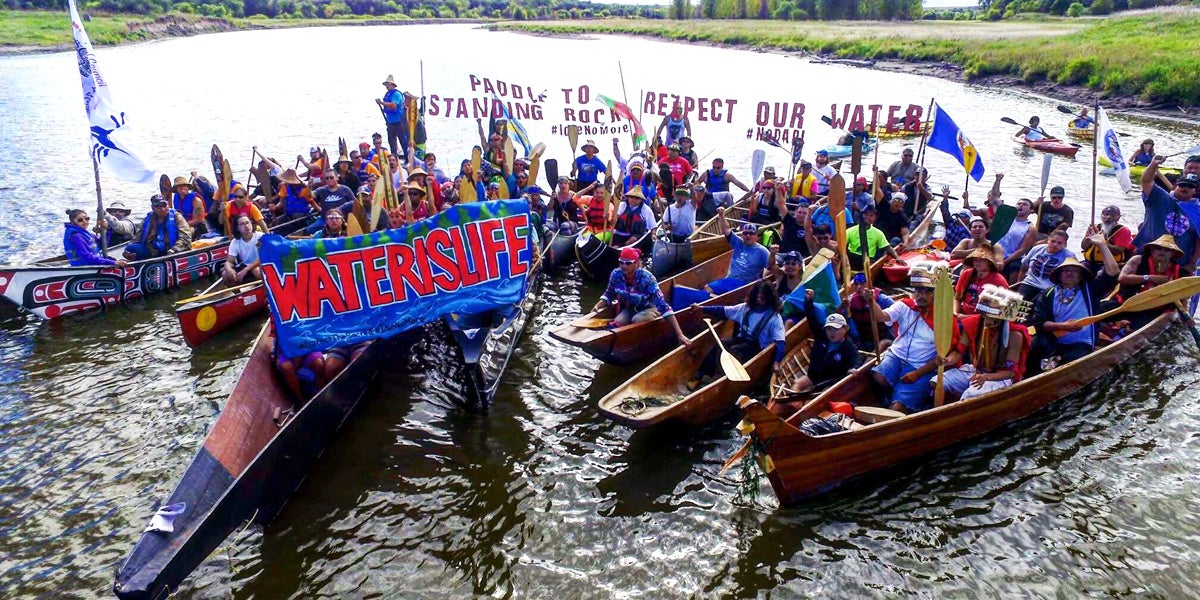 By Larry Buhl and Steve Horn

Friday afternoon brought a roller coaster of emotions for the Standing Rock Sioux Tribe and supporters in the battle to stop construction of the Dakota Access Pipeline (DAPL) near the tribe’s North Dakota reservation. Shortly after a federal judge rejected the tribe’s emergency legal challenge, a joint statement by three federal agencies effectively stopped work on the pipeline until significant questions are answered about potential environmental and cultural impacts. 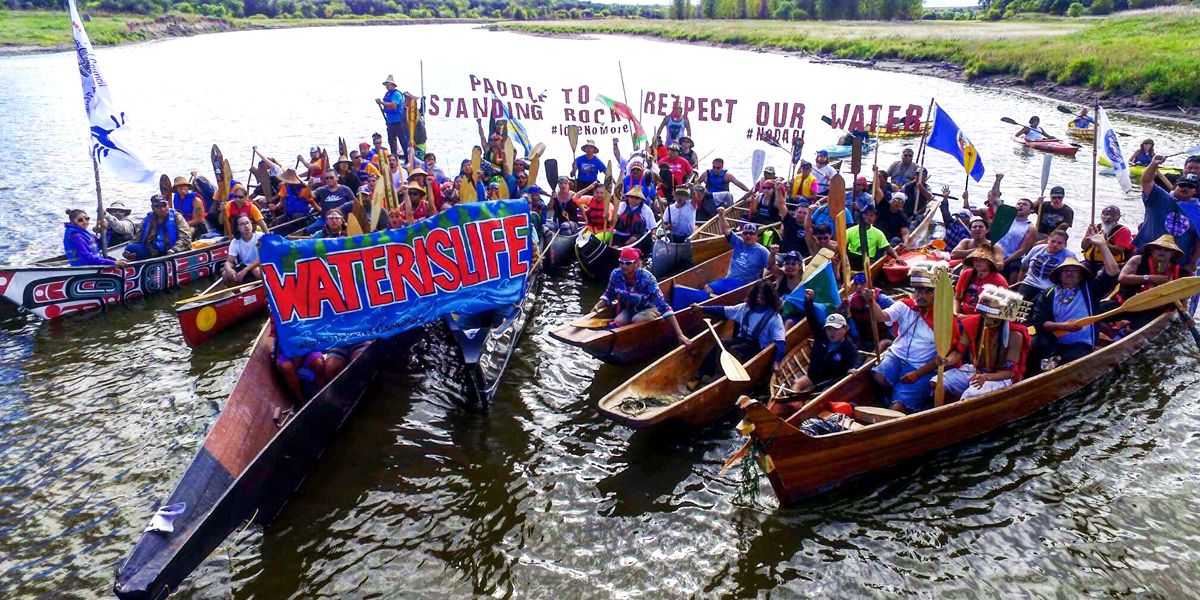 Multi-tribal gathering of demonstrators on the Missouri River to show solidarity against the Dakota Access Pipeline.Sacred Stone Camp

In August the tribe filed suit to challenge the Army Corps of Engineers’ decision to grant permits to DAPL at more than 200 water crossings for the $3.8 billion Dakota Access pipeline project. The Sioux argued that the project violates several federal environmental laws and would threaten water supplies for millions of people who rely on the Missouri River for drinking water.

The Dakota Access pipeline would snake beneath the Missouri River at Lake Oahe, carrying 450,000 barrels of oil per day from North Dakota to Illinois. Construction has already damaged sites of significant cultural significance to the Standing Rock Sioux, and continues to threaten further sites.

Snatching Victory From the Jaws of Defeat

“The Army will not authorize constructing the Dakota Access pipeline on Corps land bordering or under Lake Oahe until it can determine whether it will need to reconsider any of its previous decisions regarding the Lake Oahe site under the National Environmental Policy Act (NEPA) or other federal laws. Therefore, construction of the pipeline on Army Corps land bordering or under Lake Oahe will not go forward at this time. The Army will move expeditiously to make this determination, as everyone involved — including the pipeline company and its workers — deserves a clear and timely resolution. In the interim, we request that the pipeline company voluntarily pause all construction activity within 20 miles east or west of Lake Oahe.”

The statement also invited Native American tribes to continue ongoing talks about their concerns regarding pipelines and similar infrastructure projects.

What Happens Next is Unclear

The Corps of Engineers can block construction on its land, which does stop the contested Missouri River crossing, at least for now.

But the federal government can’t stop Energy Transfer from proceeding to construct the Dakota Access pipeline on private land, which is why it asked DAPL to voluntarily halt construction there.

It is not certain that the company will voluntarily agree to stop construction in the 20-mile zone on either side of Lake Oahe. If it continues, some Native American cultural and archaeological sites could still face the risk of damage or destruction.

Dakota Access LLC’s parent company, Energy Transfer Partners, has not responded to repeated requests for comment from DeSmog. The Departments of Justice and Interior said they would not comment beyond what was written in the joint press release.

For now the tribe and their supporters are treating the joint agency statement as a victory.

“Our voices have been heard,” said Standing Rock Sioux Chairman Dave Archambault II, in a statement. “The Obama administration has asked tribes to the table to make sure that we have meaningful consultation on infrastructure projects. Native peoples have suffered generations of broken promises and today the federal government said that national reform is needed to better ensure that tribes have a voice on infrastructure projects like this pipeline.”

Craig Stevens, spokesman for the industry-friendly Midwest Alliance for Infrastructure Now (MAIN) said the group was disappointed with Friday’s decision.

“Had the decision been different, it most certainly would have had a chilling effect on domestic infrastructure development and the U.S. economy as no sane American company would dare invest the time and resources necessary for proper consultations and approvals only to have its project shuttered halfway through,” Stevens wrote.

Not everyone who opposes the pipeline is optimistic. Robin Martinez, an attorney with the National Lawyers Guild in Kansas City, told DeSmog he has mixed feelings about the implications of the joint statement.

On one hand, he said that it “not only appears to open review of the Dakota Access permits, but the underlying decision-making process when it comes to pipelines” and that “it presents an opportunity to help shape the direction of the pipeline permitting process and actually take a hard look at the environmental impacts as required under the National Environmental Policy Act.”

Martinez was doubtful, though, that Dakota Access would stop bulldozing contested private land.

“Hopefully they’ll do the right thing and stand down, but given what appears to be their deliberate destruction of Native American historic sites last weekend, I wouldn’t count on it,” he said.

Winona LaDuke, executive director of Honor the Earth, had this to say in response to Friday announcements:

“North Dakota’s Governor Dalrymple and President Obama could defuse and demilitarize this, while the peaceful gathering to protect the water continues. We ask for a moral high ground, by elected officials while we continue to support the Standing Rock tribe and Lakota people to seek justice. There should be no further destruction or construction. We are asking Enbridge and Energy Partners to stop construction and respect our people.”

Support and protesters have continued to flow into the Sacred Stone camp near Cannon Ball, North Dakota. Currently there are more than 100 Native American Tribes represented at the camp.

The #DAPL fight is not over: Nationwide actions to stop the Dakota Access pipeline on 9/13. Find 1 near you: https://t.co/uZYLngUurS #NoDAPL

North Dakota authorities announced a mobilization of law enforcement at the protest site and National Guard members were dispatched to work security at traffic checkpoints. As of early Friday evening, no incidents had been reported at the camps, in the pipeline construction zone, or in the dozen cities around the country where protests against DAPL are taking place.

On Friday afternoon, more than six dozen youth led a run for peace to the North Dakota State Capitol in Bismarck, calling attention to their petition to stop DAPL. It was the fourth run for this youth group, who recently ran from North Dakota to Washington, DC to deliver 252,000 petition signatures.

In Des Moines, Iowa, a nonviolent civil disobedience event is scheduled for Saturday to protest the use of eminent domain to seize land for DAPL construction in that state.

On Tuesday, thousands of people will rally during the #NoDAPL Day of Action in Washington, DC and dozens of cities across the country to demand that President Obama stop the Dakota Access Pipeline. Sen. Bernie Sanders will speak alongside Tara Houska and other tribal leaders at the DC event. 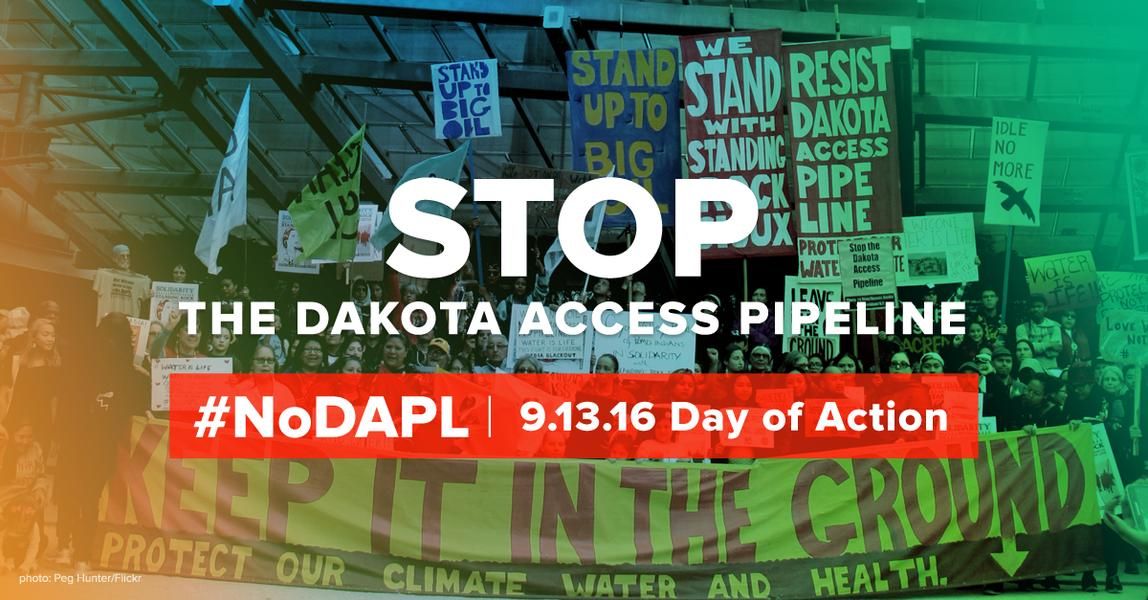 “This struggle to protect the land and water, goes hand-in-hand with the struggle to defend our Rights as Indigenous Peoples,” said Dallas Goldtooth of the Indigenous Environmental Network. “We ask our relatives and allies to join us in solidarity to defeat the Dakota Access pipeline.”