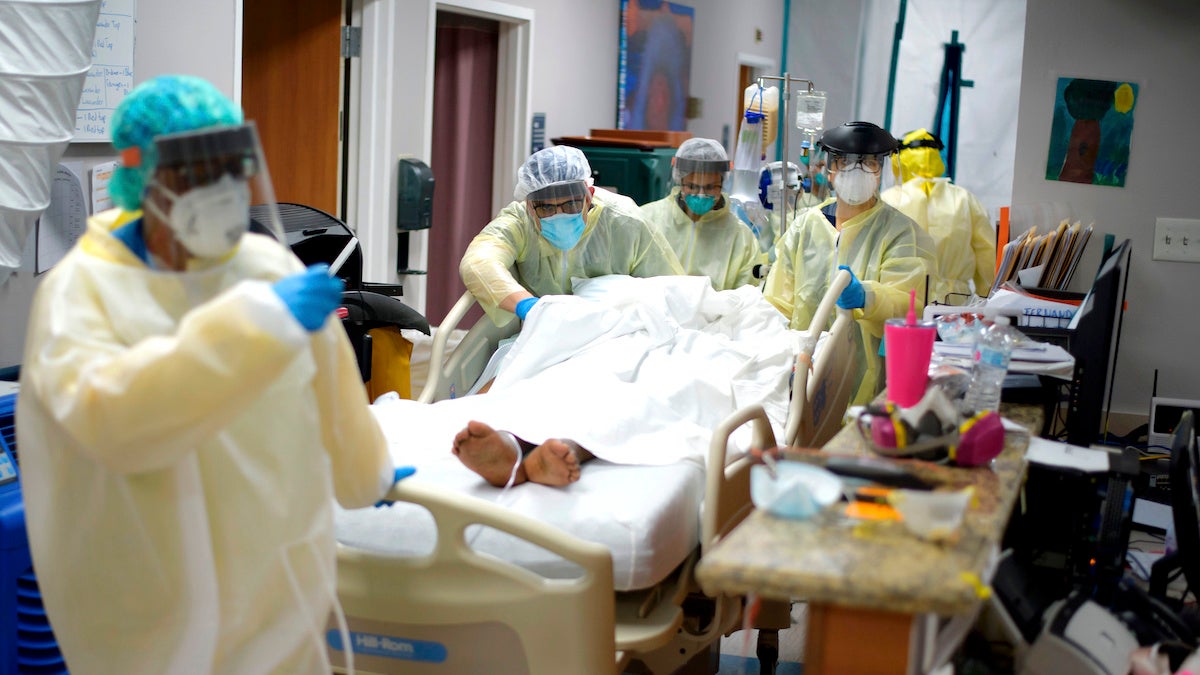 Doctors move a coronavirus patient at a hospital in Houston, Texas, one of the hardest-hit states in the U.S., on July 2, 2020. MARK FELIX / AFP via Getty Images

The U.S. shattered its daily record for new coronavirus cases Thursday with more than 75,000 new cases.

Johns Hopkins University put the record caseload at 77,300, according to The Guardian, while a Reuters tally recorded 77,217 new cases and The New York Times reported more than 75,600. Thursday marks the 11th time in the last month that the U.S. has broken a new case record, according to The New York Times, and the record has more than doubled since June 24, when a record was set with 37,014 new cases.

Top U.S. infectious disease official Anthony Fauci said Thursday that the U.S. had never lowered the daily caseload to below 20,000 and called for additional measures to control the outbreak.

“What I think we need to do, and my colleagues agree, is we really almost need to regroup, call a timeout — not necessarily lock down again, but say that we’ve got to do this in a more measured way,” he said in an interview with Facebook CEO Mark Zuckerberg, as The New York Times reported. “We’ve got to get our arms around this and we’ve got to get this controlled.”

The U.S. continues to lead the world in both cases and deaths, with 3,576,430 confirmed cases and 138,360 deaths, according to Friday morning data from Johns Hopkins University. Brazil has the world’s second-worst outbreak and just passed two million confirmed cases on Thursday, The Guardian reported. It had reported 76,688 deaths as of Friday morning, according to Johns Hopkins.

The U.S. caseload is rising in 41 states and hospitalizations are increasing in 33, The Guardian reported. In June, U.S. cases were rising by an average of 28,000 a day, while in July that number had more than doubled to 57,625, Reuters reported. The country’s last record was set a week ago Friday at 69,070, according to Reuters, and 68,241 according to The New York Times.

Particularly hard-hit states include Texas, Florida and California, which saw their caseloads rise by more than 15,000, nearly 14,000 and nearly 10,000 respectively Thursday, Reuters reported.

Deaths are also on the rise. The country as a whole reported 969 Thursday, according to Reuters, the highest daily death toll since June 10. This is still below the country’s April average of around 2,000 deaths a day. That number fell to 1,300 deaths a day in May and less than 800 a day in June, but has started to rise again this month. Public health experts fear the death toll will continue to rise following the surge in cases and hospitalizations.

Texas and Arizona, another hard-hit state, have been forced to request refrigerated trucks to store bodies as morgues fill up, CBS News reported Wednesday.

“[It’s a] hard thing to talk about – people’s loved ones are dying,” Dr. Ken Davis, chief medical officer of Christus Santa Rosa Health System in Bexar County, Texas, told CBS News. “In a hospital, there are only so many places to put bodies … We’re out of space, and our funeral homes are out of space, and we need those beds. So, when someone dies, we need to quickly turn that bed over.”

Refrigerated trucks were also used to store bodies in New York City at the height of the outbreak there.