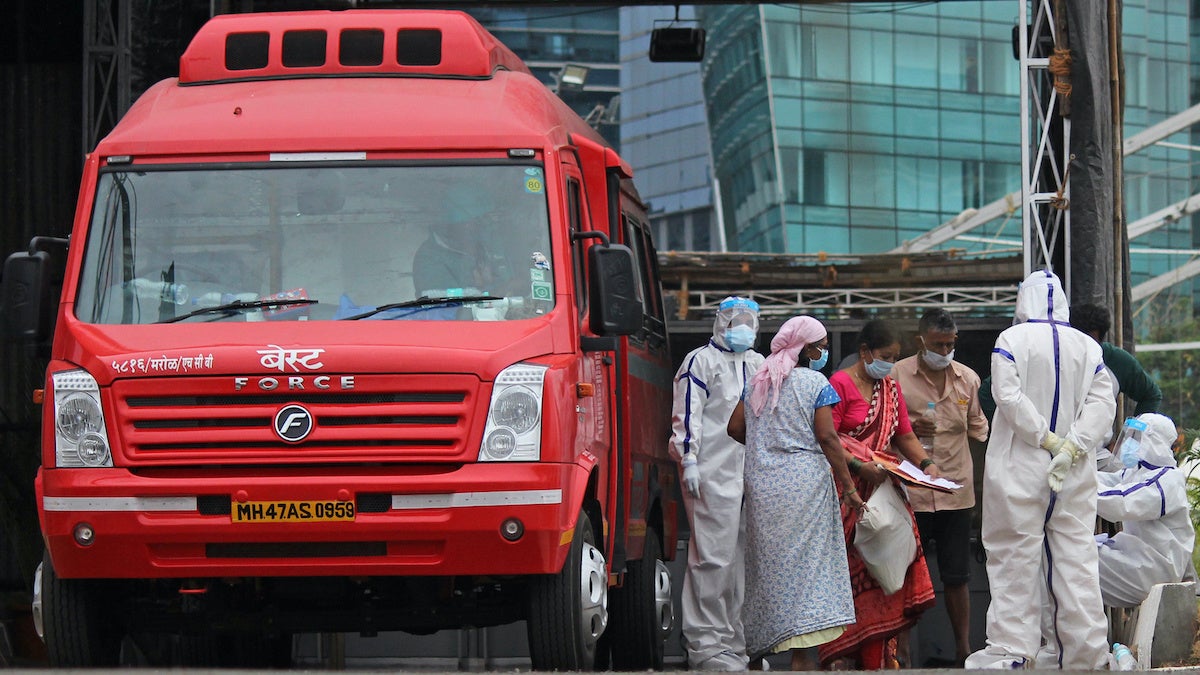 Coronavirus patients wait to be evacuated on Tuesday ahead of Cyclone Nisarga in Mumbai. Ashish Vaishnav / SOPA Images / LightRocket via Getty Images

At least 100,000 people were evacuated along India‘s west coast as the country’s financial capital of Mumbai awaits its first cyclone in more than 70 years.

Cyclone Nisarga comes as Mumbai struggles to contain the coronavirus pandemic. The city is the worst hit in India, with more than 40,000 confirmed cases and almost 1,400 deaths, BBC News reported.

“Everything we didn’t want to happen right now is happening,” one city official said on TV, as The Guardian reported.

The storm made landfall around 1 p.m. local time with wind speeds of up to 68 miles per hour, the Indian Meteorological Department (IMD) said, as CNN reported. Before making landfall, it strengthened over the Arabian Sea into to a Severe Cyclonic Storm in the West Pacific, the equivalent of slightly less than a Category 1 Atlantic hurricane. The biggest threat from the storm is likely to be flooding. It is projected to rain heavily and could produce a storm surge of up to 3.3 to 6.6 feet that could swamp parts of Mumbai, Thane and Raigad districts.

The storm made landfall in Alibag town, south of Mumbai. Alibag is “Mumbai’s answer to Martha’s Vineyard,” a beach-side town where many of Mumbai’s wealthy have vacation homes, The Guardian pointed out.

The storm is the first cyclone to hit Mumbai since 1948, when a storm killed 12 and injured more than 100.

However, scientists say the historically calm Arabian Sea is spawning more cyclones because of changes wrought by the climate crisis, India Today reported.

IMD also noted that the sea spawned more storms than normal in 2019.

These changes are now likely to have real consequences for Mumbai and the surrounding region. BBC correspondent Janhavee Moole said it had been raining in the city since Tuesday.

“I can see the trees shaking violently,” Moole said. “All beaches in the city are closed to the public and a police patrol van is making announcements, asking people to stay indoors. All safety precautions possible are being taken, but I do feel worried because the city is also in the grip of a pandemic.”

(3/n) 🌀 #CycloneNisarga A ship caught in the cyclonic storm. pic.twitter.com/A7hMgdqWQg

Coronavirus patients were among those evacuated ahead of the storm. Around 150 were moved from a newly-built field hospital to a place with a concrete roof that could better withstand high wind speeds, The Guardian reported.

In addition to Mumbai, the storm also threatens people living in shacks or shanties near the coast of the state of Maharashtra, where Mumbai is located. More than 21,000 villagers were evacuated in the state’s Palghar district.

The entire state is also the hardest hit in India by the coronavirus pandemic, CNN reported, with more than 72,300 cases and more than 2,400 deaths.

The storm also threatens the state of Gujarat, the Union Territories of Dadra and Nagar Haveli and Daman and Diu. In Gujarat, more than 50,000 people living along the coast have been evacuated.

“In wake of the coronavirus outbreak all standard operating procedures are being followed at the temporary shelters which have been sanitised and instructions have been issued on following safe distancing,” Arpit Sagar, an official in Valsad, Gujarat said, according to The Guardian.