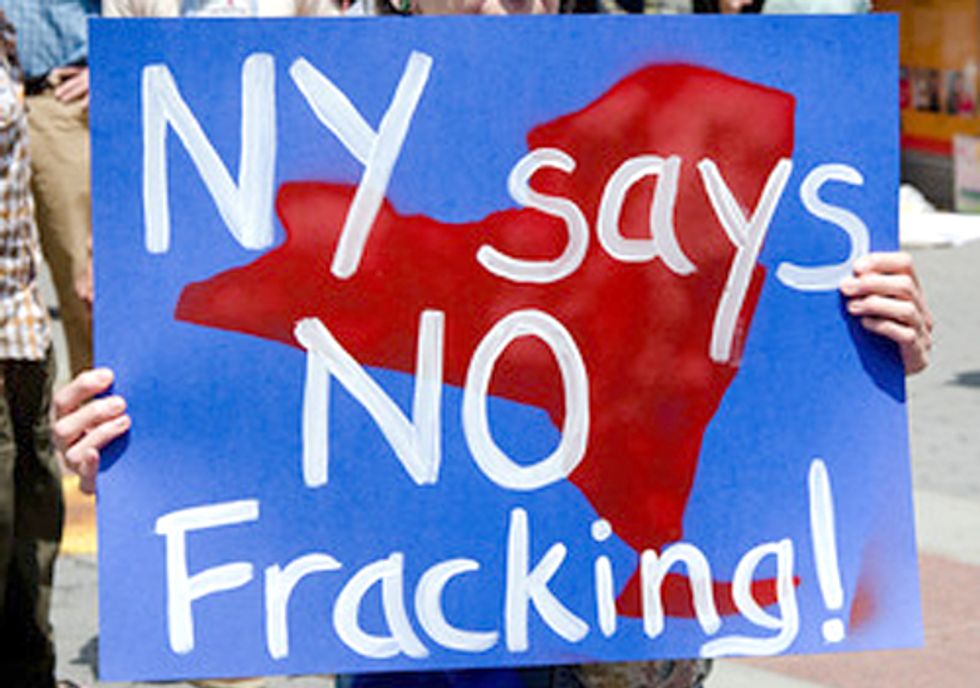 Protesters chant at the gate of Schlumberger’s fracking supply depot in Horseheads, NY, Aug. 11. Schooled in the art of being arrested, they waited in vain for trucks hauling fracking sand to try to breach their ranks. (Photo: Shaleshock)

Two months ago, Gov. Andrew Cuomo confidently promised a rapid roll out of his plan to introduce high-volume fracking to New York State in a few rural upstate counties.

But his trial balloon for the initiative drew intense negative reactions, to which the governor has responded with dead silence. That has left both sides of the natural gas drilling debate wondering whether Cuomo will stick with the plan that all but flopped in its public test or go back to the drawing board.

“The political blowback on this has been immense,” said state Assemblywoman Barbara Lifton, a Democrat from Ithaca. “I’ve never seen anything like it in my 10 years in the state Assembly and 14 years as legislative chief of staff.”

To move forward as planned, Cuomo, a Democrat, will have to contend with opposition from a strong majority in the Democratically-controlled Assembly, a frustrated state medical community, disillusioned scientists and even a nascent civil disobedience movement.

While Cuomo has drawn boundary lines to protect the New York City watershed from high-volume hydrofracking, he has shown interest in allowing it in poorer upstate regions where pro-fracking sentiment runs high.

On June 13, The New York Times reported that the governor planned to grant the state’s first high-volume fracking permits in five gas-rich counties near the Pennsylvania border. He would allow only about 50 gas wells the first year—and only in communities that expressed support for drilling. Cuomo did not deny that the leaking of the details to The Times was intended to test market his plan. A week later he told an Albany radio station that the state’s three-year preparation phase for fracking was nearly over. He said he would make his decision “shortly.”

Since then the Cuomo plan has drawn tepid support from the industry and coalitions of landowners who have leased property to drillers. But a host of other groups have warned that Cuomo is courting disaster. And even targeted communities have turned into neighbor-against-neighbor battle zones.

The plan has triggered a variety of reactions:

“This agency has not only colluded with the gas industry in crafting regulations, its preparations to date are wholly inadequate to oversee the roll-out of an industry and practice as inherently dangerous, secretive and accident prone as spatially intensive high-volume fracking,” said one recent open letter to Cuomo.

Louis W. Allstadt, a former executive vice president of Mobil Oil Corp., said he signed the letter out of frustration. According to Allstadt, who once supervised Mobil’s oil and gas exploration and production in North America, the DEC has accommodated the drilling industry and pro-drilling landowners coalitions while giving the cold shoulder to those who point out the downsides of fracking.

“There are still serious problems with the technology that may not be fixable,” Allstadt said in a recent interview. “Clearly, the pro-drilling side had access, and the people who had concerns didn’t have access.”

Joining Allstadt in signing the letter were two Cornell University scientists, Robert Howarth and Tony Ingraffea, lead authors of a widely-publicized, peer-reviewed study on fracking’s impact on climate change. Their study that found that the gas drilling process – including leaking wells and pipelines – releases enormous quantities of methane, which is up to 105 times more potent than carbon dioxide as a greenhouse gas that contributes to climate change. So even though natural gas burns much cleaner than coal or oil, its net impact on climate change may be at least as negative.

The DEC did not include that landmark study in its 1000-plus-page supplementary generic environmental impact statement (SGEIS) for fracking, the state’s fracking guidebook. Furthermore, the supervisor of the SGEIS effort, Bradley J. Field, once signed a petition denying that climate change poses a serious threat. The letter to Cuomo characterized Field as a “climate change contrarian” and said he was “directly responsible for the scientific integrity” of the crucial DEC document.

Although Cuomo has long insisted that his final decision on fracking would be based on “science, facts and information,” he has not made a move to replace Field.

The DEC also came under scrutiny in late June for its cozy relationship with the gas industry after the Environmental Working Group released a series of emails. One set of messages showed that senior DEC officials gave industry insiders a chance to comment on a draft of the SGEIS weeks before it was released to the public. In one email, a gas industry lobbyist urged the agency to water down rules. But environmental groups later acknowledged that the DEC had at times given them sneak peaks at draft regulations as well.

Still, other emails showed that industry representatives took an active, if not lead, role in drafting the state’s starkly pro-driller compulsory integration law in 2005 and in slashing setbacks for drilling operations in 2008.

Significant challenges to the DEC’s fracking guidelines were already gaining momentum by the time Cuomo floated his plan in The Times on June 13.

That same day, Lifton held a press conference to release a letter signed by 70 state legislators calling for an extension of the state’s fracking moratorium until the DEC deals more effectively with health effects and wastewater disposal. Lifton had been lining up signers for weeks.

A host of environmental groups, including Catskill Mountainkeeper and Seneca Lake Pure Waters Association, have voiced similar demands for years, and most reaffirmed their positions to Cuomo this summer. Typically, the environmental groups argue that the state cannot continue to neglect to:

The Seneca Lake Pure Waters group also urged Cuomo to insist on “a fiscally-neutral set of regulations” that protects state taxpayers from shouldering the costs for road repair and emergency response that should fall on industry.

But Cuomo has not moved on several possible financial fronts: a state severance tax for natural gas, a state natural gas accident fund, and a state mechanism to ensure road repair costs are not shifted to taxpayers.

Meanwhile, as groups line up to tell Cuomo exactly how to regulate fracking so that it does not cause environmental, medical or financial harm, thousands of New York residents are wondering why the process has to take so long.

Property owners who have leased land to gas drillers have seen delay after delay, only adding to the frustration that has been building since 2009. Many have organized into politically-active landowner coalitions and lobbied Cuomo and the DEC to simply follow the example of neighboring Pennsylvania and embrace fracking.

“New York has been sitting on its hands, dragging the process out,” said Neil Vitale, a spokesman for the Steuben County Landowners Coalition, which covers the towns of Corning and Bath. “The fracking process is being used all over the world. It’s probably the only way we’re going to harvest fossil fuels.

“Lisa Jackson, head of the EPA, thinks states can regulate better than the federal government, and New York’s regulations through the DEC will be some of the best in country. But it’s been politicized. Instead of science, it’s been politics.”

Even so, Allstadt, who retired near Cooperstown after coordinating the Mobil side of the 1999 merger of Mobil and Exxon, questioned whether Cuomo would be well served by relying exclusively on the DEC’s perspective. “We all know the DEC was talking to industry,” he said. “You can see it and hear it in the documents, the terminology, the biases that were there, the lack of effort to find independent sources.”

In the end, Lifton said, the spotlight will inevitably shift away from the DEC’s alleged shortcomings to Cuomo’s final decision. “If he goes forward, it is his responsibility. He will have to own it. This is going to be the governor’s baby.”

Peter Mantius is a reporter in New York. He covered business, law and politics at The Atlanta Constitution from 1983-2000. He has also served as the editor of business weeklies in Hartford, CT, and Long Island. He is the author of Shell Game (St. Martin’s Press 1995), a nonfiction book on Saddam Hussein’s secret use of a bank office in Atlanta to finance billions of dollars in arms purchases from Western countries before the 1991 Persian Gulf War.