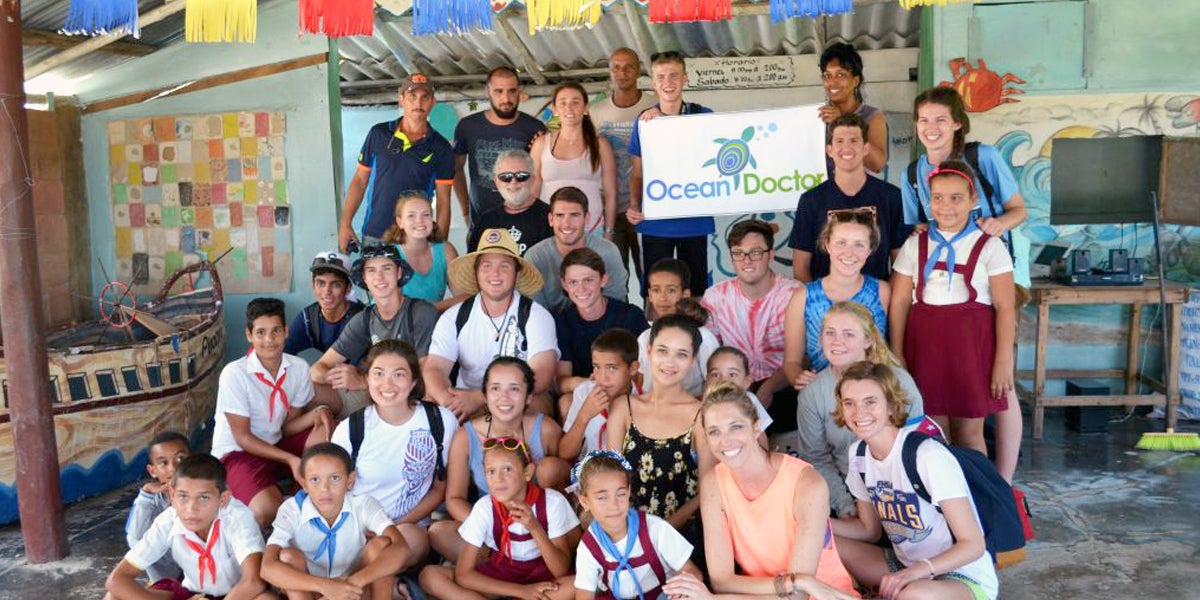 Students from Florida and Cocodrilo engage in environmental projects during an Ocean Doctor-led exchange.

Columbus’ ships were leaking, their provisions spoiling. It was clear that they would have to turn back. Yet, anchored off Cuba’s southwestern coast near a large, mountainous pine-covered island during his second voyage, Columbus had seen enough. He was convinced Cuba was part of Asia and that return to Spain by land would be possible from the main Cuban island. He ordered each member of the crew sign an affidavit testifying to this, and their signature bound them to have their tongue cut out should they ever contradict their signed statement.

The next day, June 13, 1494, they landed on the nearby island. Columbus named it Evangelista. Over the centuries since, it bore the names Isla de Cotorras (Isle of Parrots), Isla de Tesoros (Treasure Island), Isla de Pinos (Isle of Pines), and finally, Isla de la Juventud (Isle of Youth). While Cuba claimed its sovereignty from Spain in 1898, the fate of the Isle of Pines would not be settled until more than 25 years when it officially became part of Cuba, though by then most of it was controlled by U.S. interests. The 80,000 residents of the island often feel invisible, forgotten and disconnected from the rest of Cuba, an “island within an island.” Dwarfed by the massive main island of Cuba, the world is barely aware of its very existence, despite the fact that it is the seventh largest island in the Caribbean, larger than St. Lucia, Barbados, Grenada, Bonaire, St. Croix, St. Thomas, St. John, Aruba, St. Barts, Saba, Terre-de-Haut, Isla Mujeres and Key West combined. The island has struggled for decades, with limited economic opportunities for its residents, mostly in agriculture and fishing. It has long since been forgotten as an international tourist destination. 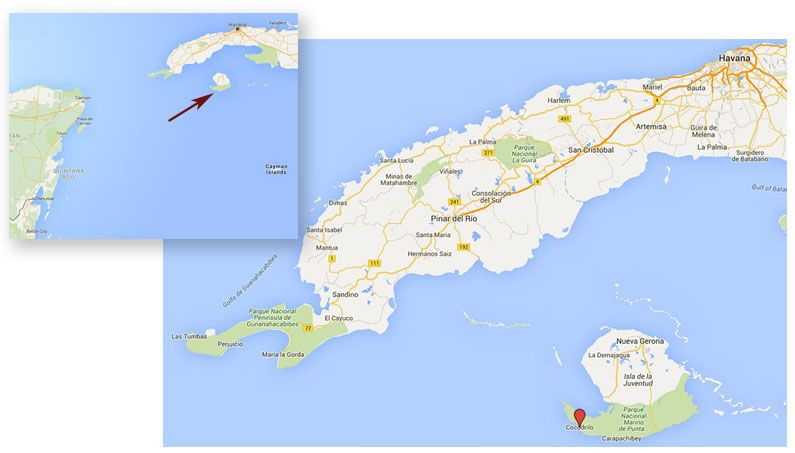 Location of the community of Cocodrilo on the southern tip of Cuba’s Isle of Youth.

The Cuban government has repeatedly tried to infuse life into the island. In 1978, Fidel Castro changed the name to Isle of Youth as part of an effort to bring new opportunity and meaning to the island. An initiative was launched to build a world-class international network of schools on the island, attracting students from Africa, Asia and beyond. Thirty years later, in 2008, Hurricane Gustav, with sustained winds of 155 mph, decimated the island, laying to waste the international schools and that chapter of the island’s struggle.

In 2015, Ocean Doctor led an expedition of Cuban and American scientists to visit the protected waters of the Isle of Youth; most of the southern half of the island is protected, part of Cuba’s massive system of protected areas. Over our 16 years of working in Cuba, we have found the country as a beacon of hope, where many coral reef ecosystems thrive in sharp contrast to the dead and dying corals elsewhere in the Caribbean.

It is estimated that 50 percent of the coral cover in the Caribbean has vanished since 1970. As we dove among the coral reefs in the Punta Frances protected area, we indeed found some of Cuba’s treasured coral reefs, gleaming and healthy. But we also found reefs in stress—some bleached white, some covered in slimy green algae, the telltale signs of a reef beginning to die.

Our Cuban colleagues were surprised. This was something new that they hadn’t seen just two to three years earlier. We saw no sharks, no groupers and virtually no large, predatory fish, a sure sign of overfishing which contributes to a reef’s decline. Although on paper the area is protected—it has the same level of protection as Cuba’s better-known Gardens of the Queen—there is virtually no enforcement and the area is fished illegally.

As if living on Isle of Youth isn’t isolating enough, a tiny community at the southern tip of the island stands isolated from the rest of the island’s population. A journey that would take 20 minutes on improved road is a jostling 3-hour journey across coral rock, mud and broken pavement, the remains of the only road—unrepaired for 30 years—connecting the fishing community of Cocodrilo (Crocodile) to the rest of the island. In such isolation, opportunities are few for the community of 300-400 residents. Unemployment is nearly 40 percent. Economic need and a lack of alternatives encourages fishing in the Punta Frances protected area. 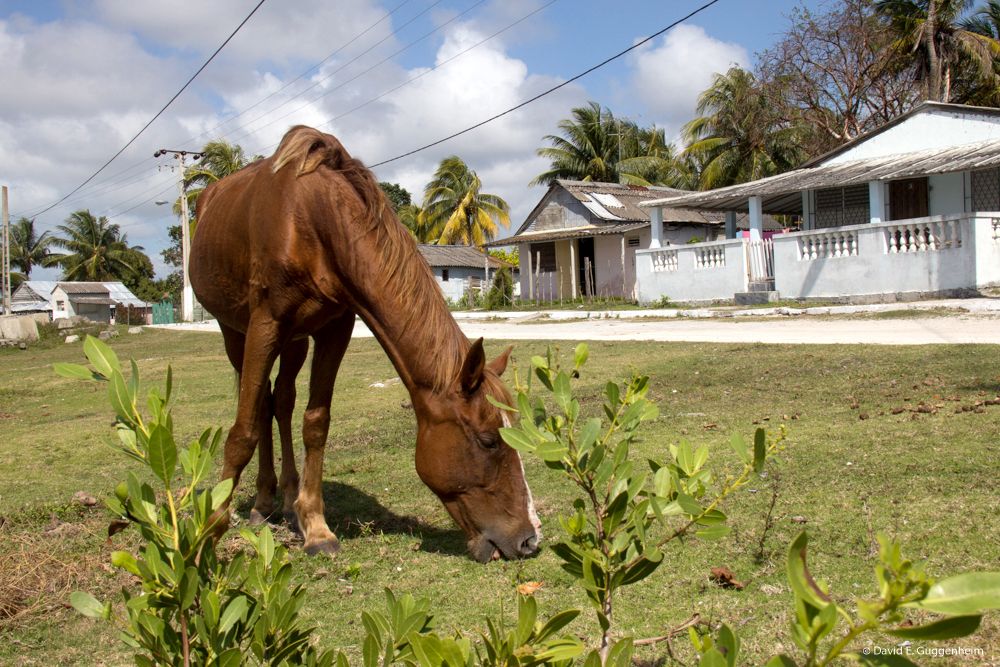 A horse feeds during a tranquil afternoon in Cocodrilo.David Guggenheim

In 2015, we began supporting the community of Cocodrilo, exploring new ideas that could both provide new economic opportunities while protecting their coral reef ecosystems. From Cocodrilo’s residents themselves was an idea they called Project “Red Alerta.”*

Project participants will be trained to snorkel and scuba dive, to identify corals and fish and to monitor their coral reefs, providing important monitoring data to scientists in Havana. The data will also be incorporated into a regional coral monitoring network to help scientists fill an important gap in our understanding of the health of coral reefs throughout the Caribbean. Until recently, data from Cuba has been missing from such regional monitoring efforts. Then, using the same skills, Red Alerta participants would be able to host visitors as guides for ecotourism, an activity that would support their local economy while providing strong incentive to protect their reefs. The project will also bring exchanges and experiences from other communities in the Caribbean and Latin America to share ideas and experiences related to sustainable tourism. 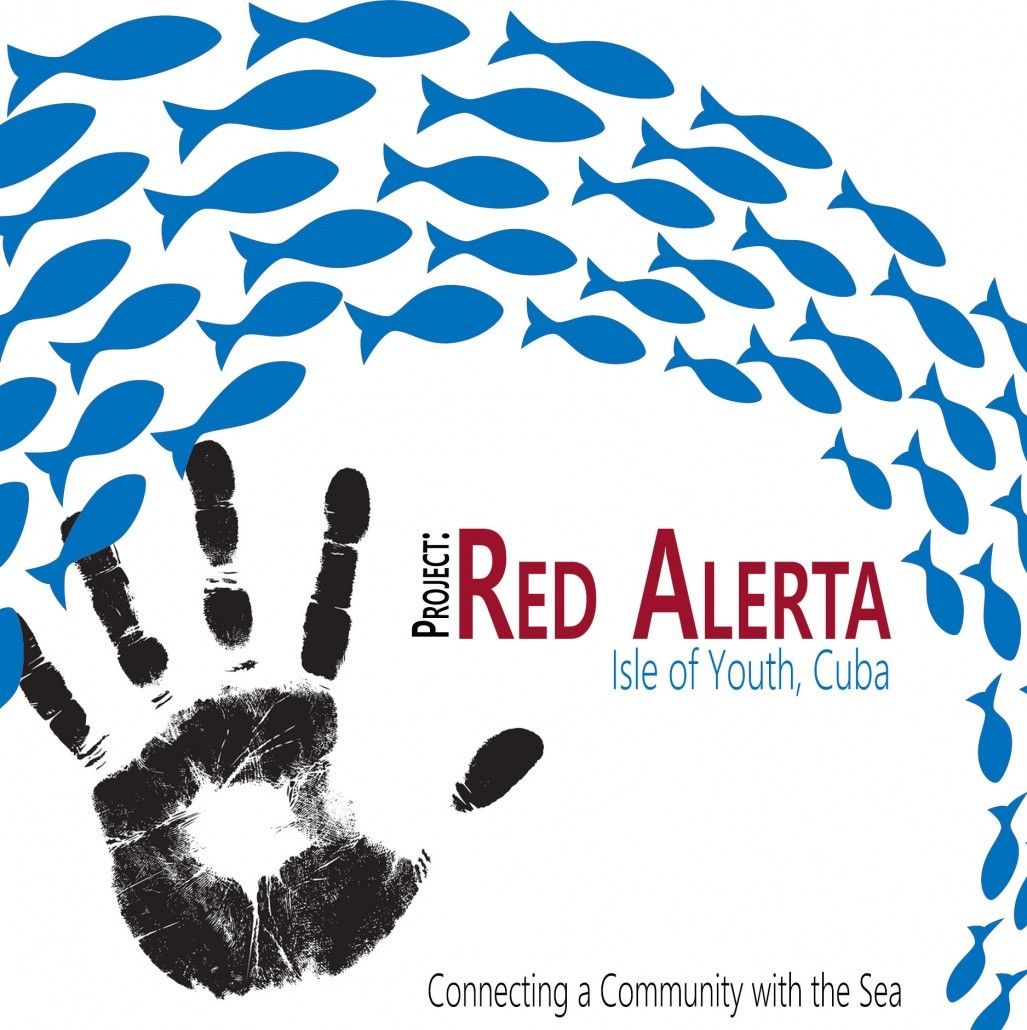 In early 2016, Ocean Doctor presented the project in Havana as part of a larger environmental economics effort for that region. Red Alerta was enthusiastically adopted as an official project of the Cuban government and, as the project now clears the final approvals and red tape, the team moving ahead with a project that will make a difference in the lives of this charming community and the coral reefs of nearby Punta Francés.

In our work with the community, and as part of our Cuba Travel Program, we’ve brought U.S. student groups to Cocodrilo to participate in in environmental awareness activities with the Red Alerta team, who expressed great enthusiasm and hope for the project and the new opportunities it represents. Cocodrilo residents and the Red Alerta team members proudly constructed new signs, like the one welcoming new visitors: “We Protect Our Coastal Marine Biodiversity—Project Red Alerta,” participated in beach clean-up activities and built waste baskets to encourage the community and visitors to protect their coastal environment. 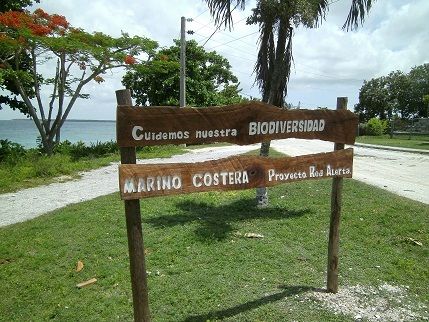 There is growing fear that, with the normalization of relations with the U.S., Cuba will be smothered by the same destructive forces of mass tourism that have swept through much of the Caribbean over the past 60 years, forces that have contributed to the degradation of coral reefs and other ecosystems, displacement of local communities and the loss of culture.

In the first year after normalization began, tourism in Cuba rose by 17.6 percent, nearly quadruple the world’s average growth rate. By mid-2016, tourism rose another 11.9 percent over 2015. While it is critically important to learn from the mistakes of the mass tourism model when assessing Cuba’s future alternatives, it is equally important to recognize that small-scale, sustainable tourism can represent an important solution to economic and environmental challenges the country now faces.

Over time, Red Alerta will create new economic alternatives through sustainable tourism for the community while providing strong incentives to protect their coastal waters. In addition, the program will have important educational programs to continue the support the growing environmental awareness throughout the community. Eventually, we hope to bring this model to other coastal communities in Cuba. 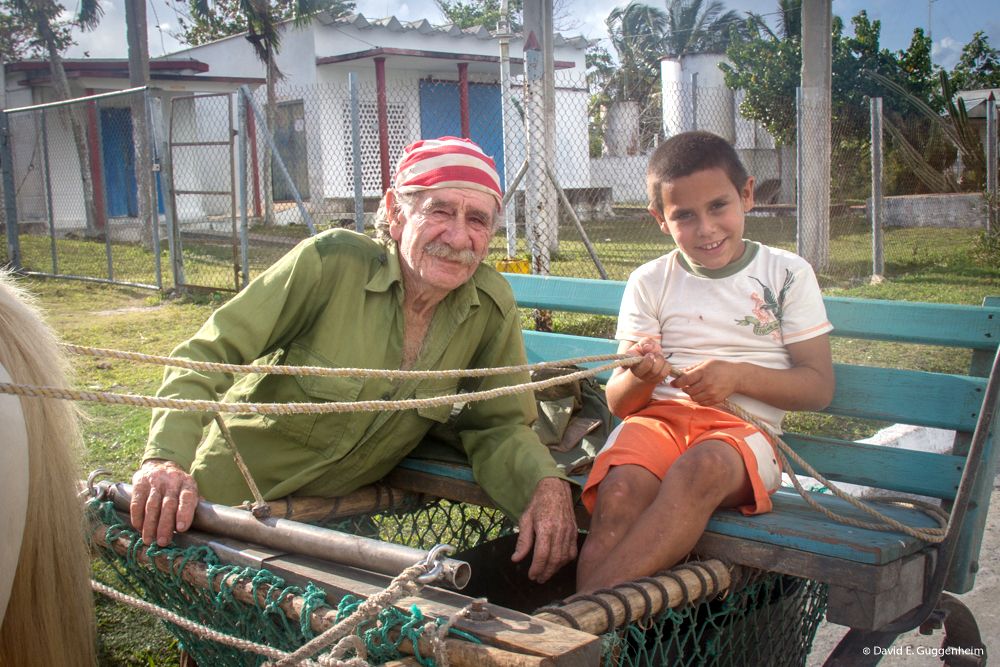 A Cocodrilo resident teaches his grandson to drive a horse buggy.David Guggenheim

From Columbus to Castro and all the chapters in between that have tried to define this island of so many names, Isle of Youth remains a paradox: It is an island that is enormous yet virtually invisible; an island nestled close to Cuba’s mainland’s coast, yet exists in virtual isolation; an island with a history of grand dreams but strewn with heartbreaking failures; an island of profound natural beauty but, despite its isolation, now faces some of the same ecological threats the well-known, oft-visited islands of the Caribbean face. Now Isle of Youth enters another new chapter. This time many of its hopes lie in a tiny, charming community, impossibly isolated from the rest of us, whose bright-eyed residents desperately want to make a difference. With vision, hope and hard work, we hope to help make their dreams—and the dreams of this beautiful island—a reality at last.