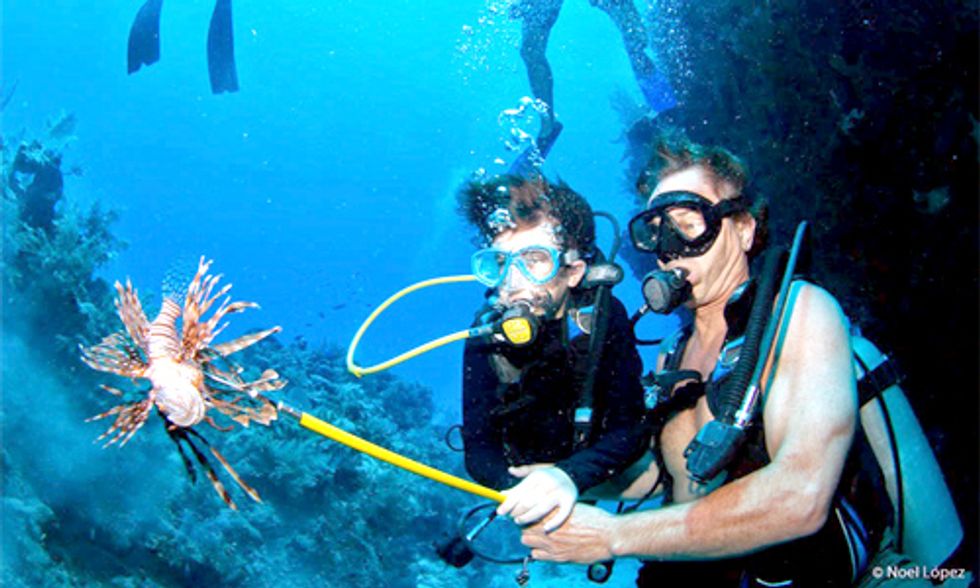 [Editor's note: Conor Kennedy traveled this summer to Cuba to dive the Gardens of the Queen, one of the most pristine marine environments in the Caribbean, to conduct ecological assessments of the coral reef ecosystem with Ocean Doctor. This is the last of a five-part series. Read Part I, Part II, Part III and Part IV.]

Cuba claims a larger landmass than all the other islands of the Greater Antilles together. The island occupies the intersection between the Atlantic, Caribbean and Gulf of Mexico. As such, it is a crossroads of high value ecosystems and a hot spot for endemism and biodiversity. The island and its waterways provide nursery, breeding and migratory staging habitat to fishes, birds and animals that populate and enrich waterways from Venezuela to Florida. We talked to Anmari Alvarez Aleman, a Cuban marine mammal expert. She explained that scientists have tracked Florida manatees to feeding habitats in Cuba!

In one sense Cuba's political and economic isolation has given it the opportunity to make good long-term decisions about its environment. Instead of responding to market pressures and the corrupting influence of corporate money and campaign contributions to sprout hotels and resorts on every spit of sand and open water, Cuba's beaches and reefs have been largely protected. When the embargo ends, tens of thousands of pleasure and charter boats from Miami will descend and likely destroy this last piece of paradise.

Driving in a classic car in Havana, Cuba.

Aidan on the Avalon II at sunset.

Policy choices made by Cuba's government today will determine whether these reefs will survive that onslaught or if they will instead bleach and die under economic and human pressure as they have across the Caribbean. “We need to lock these policies in place today," a foreign ministry official told us. He promised that “Cuba's government is determined to implement binding rules that will allow us to avoid the kind of reckless development that has impoverished the people and the environment on other Caribbean Islands."

I, myself, have seen, elsewhere in the Caribbean, how the sale of the best beaches and reef locations to for-profit multinational companies strands the poorest island inhabitants depriving them of access to their own coasts. The population becomes trapped in sweltering cities and towns inland between the forbidding skylines of giant foreign-owned hotels. That development model cuts people off from their beaches, reefs, fisheries and the patrimony of the commons. Hopefully, Cuba will try a different strategy.

Back in Havana, I went with my new friends from The Explorers Club to the Tropicana where we all participated in the highly competitive dance contest. My Dad took Aidan to night church which they reported was crowded with congregants worshipping and dancing to the rhythms of loud rock music and evangelical dancers. Everything in Cuba seems to be lively and colorful.

A final word about the embargo: Cuba is still a dictatorship. The Cuban government restricts basic freedoms like the freedom of speech and assembly. The government owns the media. During periodic crackdowns the Cuban government fills Cuban jails with political prisoners. Elections, as in most old-school communist countries, offer limited options. Still, I think most Americans of my generation ought to look deeper into the justification for our longstanding embargo against this tiny island.

There are real tyrants in the world, with whom America has made close allies and many governments with much worse human rights records than Cuba—Azerbaijan, for example, whose president Ilham Aliyev boils his opponents in oil, Saudi Arabia, Jordan, China, Bahrain, Tajikistan, Uzbekistan and many others where torture, enforced disappearances, religious intolerance, suppression of speech and assembly, medieval oppression of women, sham elections and non-judicial executions are all government practices.

Despite its poverty, Cuba has managed some impressive accomplishments. Cuba's government boasts the highest literacy rates for its population of any nation in the hemisphere. Cuba claims its citizens enjoy universal access to health care and more doctors per capita than any other nation in the Americas. Cuba's doctors, reportedly, have high quality medical training. Unlike other Caribbean islands where poverty means starvation, every Cuban, receives a monthly food ration book that provides their basic necessities. Even Cuban government officials admit that the economy is smothered by the inefficiencies of Marxism. However they also argue that the principal cause of the island's economic woes is the strangling impacts of the 60 year old trade embargo.

It is clear to everyone that the embargo first implemented during the Eisenhower Administration in October 1960, unfairly punishes regular Cubans. Mostly due to the embargo, Cubans suffer a cataclysmic lack of medicine and medical equipment, and long lines outside their pharmacies. We saw some Cuban hospitals that looked like dilapidated ghettos. The embargo impedes economic development by making virtually every commodity and every species of equipment both cataclysmically expensive and difficult to obtain.

Worst of all, instead of punishing the regime for their human rights restrictions, the embargo has fortified the dictatorship by justifying oppression. It provides every Cuban visible evidence of the boogeyman that every dictator requires—an outside enemy to justify an authoritarian national security state. The embargo has also given Cuban leaders a plausible bugaboo upon which to blame Cuba's poverty by loaning credence to the Cuban government's argument that the U.S., not Marxism, has caused the island's economic distress.

The embargo allows the regime to portray America as a bully and themselves as courageous leaders standing up to threats, intimidation and economic warfare by history's greatest military superpower. It perpetually reminds the proud Cuban people that our powerful nation, which has staged invasions of their island and plotted for decades to assassinate their leaders and sabotaged their industry, continues an aggressive campaign to ruin their economy.

Perhaps the best argument for lifting the embargo is that it doesn't work. Our 60-plus year embargo against Cuba is the longest in history and yet the Castro regime has remained in power during its entire duration. Instead of lifting the embargo, different U.S. administrations, including the Kennedy administration, have strengthened it without result. It seems silly to pursue a U.S. foreign policy by repeating a strategy that has proved a monumental failure for six decades.

The embargo clearly discredits U.S. foreign policy, not only across Latin America, but also with Europe and other regions. For more than 20 years, the UN General Assembly has called for lifting the embargo. Last year the vote was 188 in favor and two against (U.S. and Israel). The Inter American Commission on Human Rights (the main human rights bodies of the Americas) has also called for lifting the embargo. The African Union, the same.

One reason that it diminishes our global prestige and moral authority is that the entire embargo enterprise only emphasizes our distorted relationship with Cuba. That relationship is historically freighted with powerful ironies that make the U.S. look hypocritical to the rest of the world. Most recently, while we fault Cuba for jailing and mistreating political prisoners, we have simultaneously been subjecting prisoners, many of them innocent by the Pentagon's own admission, to torture—including waterboarding and illegal detention and imprisonment without trial, in Cuban prison cells in Guantanamo Bay. While we blame Cuba for not allowing their citizens to travel freely to the U.S., we restrict our own citizens from traveling freely to Cuba.

In that sense, the embargo seems particularly anti-American. Why does my passport say that I can't visit Cuba? Why can't I go where I want to go? The Cuba trip was a wonderful education for my brother and me since we got to see communism with all its warts and faults up close. Why doesn't our government trust Americans to see for themselves the ravages of dictatorship?

President Kennedy told Castro, through intermediaries, that the U.S. would end the embargo when Cuba stopped exporting violent revolutionists to Latin America's Alliance for Progress nations—a policy that mainly ended with Che Guevara's death in 1967 and when Castro stopped allowing the Soviets to use the island as a base for the expansion of Soviet power in the hemisphere. Well, the Soviets have been gone since 1991—more than 20 years, but the U.S.-led embargo continues to choke Cuba's economy. If the objective of our foreign policy in Cuba is to promote freedom for the subdued citizens, we should be opening ourselves up to them, not shutting them out.

We have so much to learn from Cuba—from its successes in some areas, and failures in others. As I walked through the streets of Havana, Model-T's chugged by and Che's soaring effigy hung in wrought iron above the street. I could feel the weight of sixty years of Cuban history, a history so deeply intertwined with that of my own country. Now, as Havana crumbles and the Gardens of the Queen thrive, I hope that in sixty years every American will have the chance to see the ocean as it is in Cuba, and as it should be back home.

Crossing Cuba in a Chinese Bus

500 Years After Columbus, Cuba's Gardens of the Queen Still Pristine