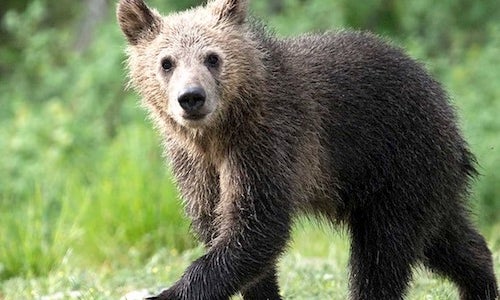 As the U.S. Fish and Wildlife Service (USFWS) proposes to remove the Yellowstone area’s grizzlies from the Endangered Species List, two bears were killed on Sunday evening in separate car accidents in Grand Teton National Park in Wyoming.

According to KTVQ, a CBS affiliate in Billings, Montana, the first bear was a female adult black bear that was hit on U.S. Highway 89 north of the Deadman’s Bar Road Junction around 7:30 p.m. The second bear—believed to be the only cub of “399,” a popular and beloved mother grizzly living in the national park—was hit later that same evening on the North Park Road (U.S. Highway 89) between the Pilgrim Creek Road Junction and Colter Bay Junction.

BREAKING: Snowy, the only cub of world-famous Grizzly 399, was hit & killed by a car overnight: https://t.co/KViWLKaBfS

It appears that the bears might have been killed due to hit-and-run accidents.

“The circumstances preceding the incidents are unknown as the motorists did not stop or report the incident in either case,” KTVQ reported.

News of the cub’s death has especially been met with woe on social media. The Associated Press noted the 1-year-old grizzly was likely the only one born this year in the national park.

Even in the sanctuary of Grand Teton National Park it is dangerous to be a bear. Grizzlies are killed by humans, either accidentally or intentionally, at a horrific rate. Some 80 percent of known mortalities of the bears come at the hands of humans.

The death of this cub is especially tragic since Grizzly 399 is nearing the end of her reproductive life, and sadly she has only replaced herself in the population with one adult female, Grizzly 610.

399’s cub, known as Snowy or Spirit by the bear watchers of Grand Teton, was adored for its antics and notably white face and will be sorely missed.

The deceased cub weighed between 40 and 50 pounds when it was found off the road. The bear’s carcass will be preserved and used for educational purposes, KTVQ reported.

Park officials are conducting DNA tests to confirm if the baby cub—who was adored for his whitish face—indeed belonged to 399. However, “based on the cub’s marking, the bear’s marking and the bear’s location, we’re reasonably confident,” about the relationship, park spokesman Andrew White told The Guardian.

National Geographic also reported that 399 “had frantically tried to attend to her injured offspring.”

Grizzly 399 has had triplets three years in a row but is unlikely to have any more offspring.

“Twenty years old is certainly getting up there in years for a grizzly,” White told the Associated Press.

She could possibly have a cub next year if she finds a mate soon, the Associated Press noted, as grizzly bear mating season begins in May and goes through mid-July.

Grand Teton’s park service reports that a total of 37 animals have been struck on the park’s roads this year already, with more than 100 animals typically hit each year.

Grizzly bears in the Western U.S. are facing imminent threat after the USFWS proposed removing Yellowstone area grizzlies from the federal endangered species list, saying that their numbers have recovered to a point where federal protection is no longer needed.

However, opponents warn that the action would open up the possibility of legally hunting the animals. Some opponents also argue that the iconic animals are not ready for delisting because climate change and other human-caused factors have threatened their food sources.

Famed primatologist and conservationist Dr. Jane Goodall is one of 58 prominent scientists and experts who signed a letter in May urging the USFWS to protect the grizzlies. The move came after Montana wildlife officials announced draft grizzly hunting regulations that, once approved, would offer $50 permits to local residents and $1,000 permits for out-of-state hunters to shoot the bears. The state’s grizzly hunting plan would be implemented if the bears are delisted.

In a video message delivered to the House Natural Resources Committee in Washington, DC to urge protection for the grizzlies, Goodall directly mentioned 399, saying the bear could be put in harm’s way if the hunting were allowed.

“If the grizzlies are delisted and the state opens a hunting season, 399 might be shot by a trophy hunter so that her head can be mounted on a wall, her skin laid on the floor for human feet to trample,” she said. “I think many hearts would break. I know mine would.”