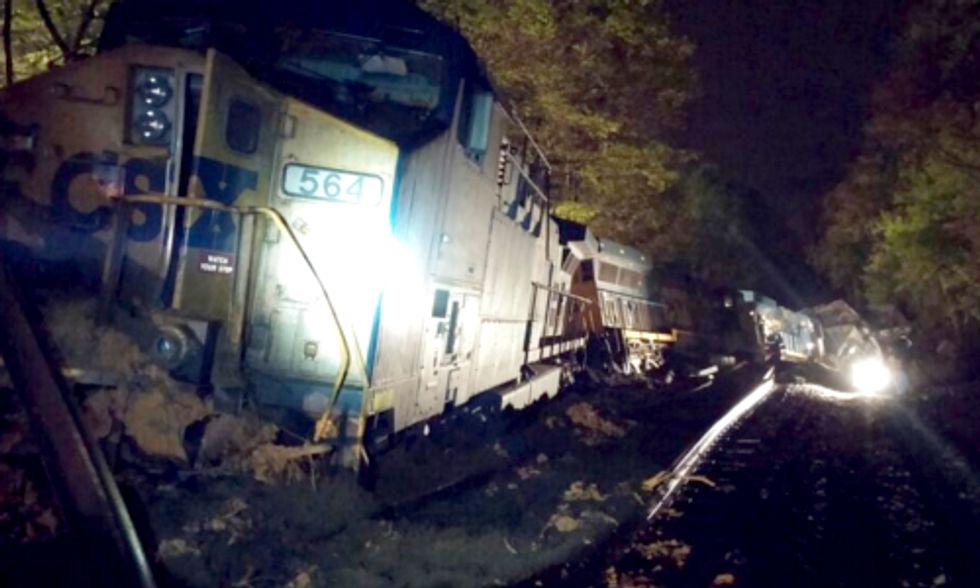 CSX spokeswoman Kristin Seay told the Associated Press that about 10 cars of the train traveling from Cumberland, MD to Bowie derailed Thursday. The train had three locomotives and 63 railcars, all of which were carrying coal. The train originated from a coal mine in Pennsylvania.

The train was carrying about 8,000 tons of coal.

One of the train cars overturned, spilling its load of coal, but there were no injuries reported in the incident. CSX spokesman Gary Sease said the company would investigate the derailment. He said increased rain may have played a role, but it's too early to say.

"Weather will be just one of many factors that are part of the investigation in all of the accidents, Bowie and Lynchburg and Baltimore as well," Sease told the Baltimore Sun. "It's definitely a lot of rain in the region lately, but again our investigations and the NTSB's investigation in Lynchburg are just underway and nothing's been established yet."

About 200 miles away in Lynchburg, VA, a CSX train derailed Wednesday, resulting in thousands of gallons of crude oil spilling into the James River. The National Transportation Safety Board is investigating that incident.

"This has got to be a wake-up call for federal authorities to protect people and the environment from these dangerous shipments,” Mollie Matteson of the Center for Biological Diversity said in a statement after the Lynchburg derailment.

“A massive increase in rail shipment of oil across the Northeast and much of the country has occurred with no public scrutiny to ensure our safety or protect the environment,” she said. “A moratorium is needed until a careful review can ensure safety measures are in place to avoid another tragic accident.”