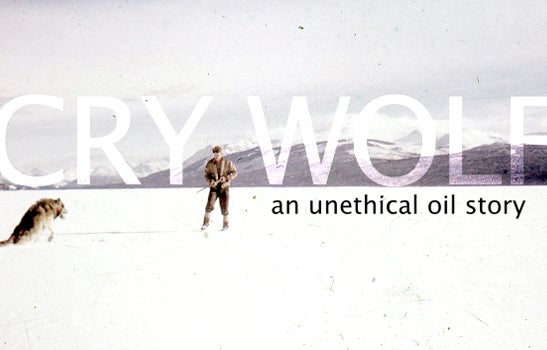 Over the last several months, Alberta has killed more than 500 wolves using aerial sharpshooters and poisoned bait in order to conceal the impact of rapid industrial development on Canada’s iconic woodland caribou.

Independent scientists say that declining caribou health stems chiefly from habitat destruction caused by the encroachment of the tar sands and timber industries. But in a perverse attempt to cover industry’s tracks, the Alberta government is ignoring the science and shifting the blame to a hapless scapegoat: the wolf.

As DeSmogBlog reported earlier this year, the Alberta Caribou Committee, tasked with the recovery of the province’s dwindling caribou populations, is dominated by timber, oil and gas industry interests. Participating scientists have been silenced—their reports rewritten and their recommendations overlooked.

The prospect of the expansion of this unscientific wolf cull, projected to claim the lives of roughly 6,000 wolves over the next five years, has outraged conservationists and wildlife experts. While the wolves dodge bullets and poison, this scandal is flying largely under the public radar.

A team of DeSmogBlog researchers traveled to the Tar Sands region to investigate the dirty oil politics behind this fool’s errand. Here is our first report: Cry Wolf: An Unethical Oil Story.

Rather than relying on science to protect caribou habitat and restore this iconic species, Alberta is killing wolves in order to protect unfettered industrial development.

As a result, our unethical oil addiction is leading to one of the most shameful wildlife control programs ever imagined. Government complicity, on both the federal and provincial levels, leaves biologists caught up in the mix with no higher power to appeal to. Real science is shelved, while industry-friendly political decisions prevail.

What does this say about the state of our democracy when scientists are ignored and industry profits are prioritized ahead of safeguarding iconic wildlife species?

Stay tuned for more details as DeSmog continues our investigation into this controversial issue.

You can make a difference by participating in these actions to stop the unscientific wolf cull.

Credo action: Tell the Canadian government: Stop your tar sands wolf kills.—More than 200,000 voices in opposition to the wolf killings.

DeSmogBlog petition on Change.org—Tell Canada’s federal Environment Minister Peter Kent, who considers the cull “an accepted if regrettable scientific practice,” to put an end to the reckless wolf slaughter.

Alberta Provincial petition—Put some pressure on at the provincial level too, by signing this petition to Frank Oberle, Minister of Alberta’s Sustainable Resource Development and Fiona Schmiegelow from the University of Alberta.

National Wildlife Federation Action Center—American residents can go here to send a letter to their senator or representative in order to connect the dots between the Keystone XL tar sands pipeline and the wolf cull. Also watch National Wildlife Federation scientist David Mizejewski on the Today Show and read NWF’s report on the plan to poison wolves to protect tar sands interests.

And for those who may be unfamiliar with what the ‘ethical oil’ campaign is, check out our previous coverage of the Sierra Club’s John Bennett and Ethical Oil Institute spokesperson Kathryn Marshall on CBC’s Power and Politics with Evan Solomon.