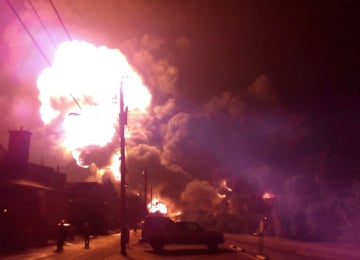 The inherent risks of transporting crude oil have once again been brutally and painfully exposed after a massive explosion in Quebec, Canada left part of an affected town looking like a war zone.

At least five people died when a crude oil train derailed and blew up on Saturday, causing an explosion that has been compared to an atomic bomb. An estimated 40-50 people are missing, many whom had been enjoying a late night drink in a local bar. An estimated 30 buildings have been completely incinerated.

The fire and explosion was so intense that the local police are warning that some bodies may never be recovered or identified. The explosion happened in the picturesque lakeside town of Lac-Megantic, which is close to the U.S. border with Maine. The train had been bringing shale oil from the Bakken Field in North Dakota to a refinery in Saint John, New Brunswick.

In the aftermath of the disaster the on-going debate as to whether it is safer to transport oil via pipeline or railroad has once again been raging. The disaster may well be used by the proponents of the Keystone XL pipeline to argue that pipelines are safer.

Both transport modes have problems. Edward Whittingham, the executive director of the Canadian research organization, the Pembina Institute, argues there are safety and environmental risks inherent in both pipelines and railroads. We only have to think back to Exxon’s recent Arkansas spill to know that pipelines in the U.S. are not that safe either.

But for the moment, even as Canada’s tar sands are delivered apace, there is no clear route for them to get to the international markets. That is why they continue to press the U.S. to approve the Keystone XL pipeline.

Despite this on-going uncertainty, Canada is looking to exploit another heavy form of oil too in Northern Alberta. Think of it as “Tar Sands Two”—except this time its called Dolofudge and has the consistency of peanut butter.

This sludgy bitumen like substance is not like the tar sands and found in the region’s sands, but it is located in the porous rocks of the region’s limestone and dolomite, hence the name Dolofudge. The Canadians are saying the region could contain some 500 billion barrels of Dolofudge—more than the combined recoverable reserves of Saudi Arabia and Venezuela.

Dolofudge is not even included in the traditional oil reserve amounts of Canada, because no one has managed to extract it on a commercial scale. But one pilot study is now up and running in the West Athabascan Grosmont, about 100 kilometres west of the tar sands center of Fort McMurray, Alberta.

How much Dolofudge is recoverable is anyone’s guess. What we do know is that with any new oil development there is a huge amount of hype which may not bear any resemblance to reality. One analyst has warned that developing the new fudge reserves is “fraught with blind alleys and unanticipated setbacks.”

The trouble is, that is what they used to say about tar sands and it never stopped the oil industry before.