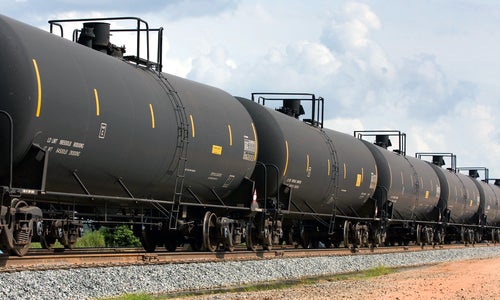 With an estimated 9 million barrels of crude oil moving over rail lines in North America at any given moment, it’s no wonder that safety and environmental ramifications of oil-by-rail are top of mind for many. In the wake of the one year anniversary of Quebec’s Lac-Mégantic fatal train derailment explosion, it’s imperative that more people become aware of the dangers of unprecedented amounts of oil being transported through the heart of communities and cities in the U.S. and Canada.

Bomb Trains: The Crude Gamble of Oil by Rail, a video produced and published this week by VICE News, investigates the rapid expansion of oil-by-rail transport. Producer and cinematographer Spencer Chumbley, accompanied by Nilo Tabrizy, traveled to the Pacific Northwest to speak with residents and experts on the front lines of the battle over bomb trains in the Seattle, Washington area.

“When you walk around Washington and Oregon with a camera in your hand and a tripod slung over your shoulder, people are going to come up and ask you what you are working on,” said Chumbley in an email interview. “The Pacific Northwest lived up to its stereotype—community members are pretty engaged in environmental issues. And when we spoke to them about oil trains, I’d say 90 percent of the people we ran into were aware of the issue and had a strong opinion about it—either for or against.”

The increase in oil-by-rail is due to the fracking boom and lack of pipeline infrastructure. In 2013, oil train accidents resulted in more than 1.15 million gallons of spilled oil, representing a 50-fold increase over the yearly average between 1975 and 2012.

This week, in response to a recent train derailment and the extreme threat facing communities, three Seattle-area residents blockaded train tracks at an oil facility at Tesoro’s Anacortes Refinery and were arrested. The protestors were demanding an immediate end to all new oil-by-rail terminals proposed in the Northwest.

Even Seattle Mayor Ed Murray believes oil-by-rail is a huge public safety issue and is advocating for less oil and coal coming through his city.

I asked Chumbley what his biggest takeaway was from filming this video and he said, “that proper regulation comes from relentlessness. The researchers, journalists and activists have to relentlessly pressure legislators, government agencies and other authorities to ensure their personal safety and the safety of the environment.”