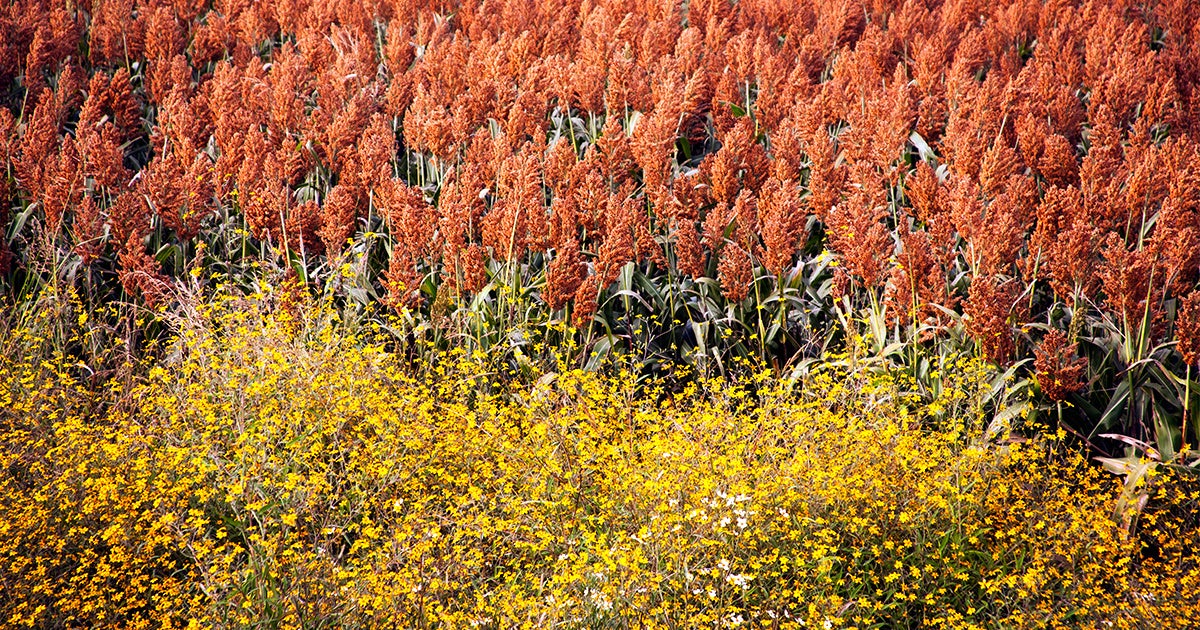 Sorghum, anyone? The right crop in the right place will grow more food. Tomascastelazo / Wikimedia Commons

Scientists in the U.S. and Italy have worked out a strategy to feed an extra 825 million people—by rearranging where crops are grown. Their new menu for the global table could serve up 10 percent more calories and 19 percent more protein, while reducing the use of rainwater by 14 percent and cutting irrigation by 12 percent.

The secret: shift the patterns of crop growth to make the best of climate change, in a rapidly warming world in which rainfall patterns could become less predictable and drought and heat waves will become more frequent and more intense.

So that means, for some, less reliance on traditional staples such as rice, wheat, millet and sugar cane and sugar beet, and a switch to more groundnuts, soybean, sorghum, roots and tubers.

Climate change has already announced itself in small ways with earlier wine harvests in Europe, the promise of a sparkling future for wine in southern England, and the first successful cultivation (in South Wales) in the UK of that costly Mediterranean delicacy, the black truffle.

But the overall picture is alarming: there have been predictions of lower yields for coffee producers in South America and for wheat farmers in Europe, Asia and the Americas. There have been warnings that climate change could hit African farmers hard and that traditional crop varieties may not be able to adjust to new conditions.

Kyle Davis of Columbia University’s Earth Institute and colleagues reported in the journal Nature Geoscience that they matched models of water use in farming and yield maps for 14 of the world’s most important food crops.

They found that their new models of crop distribution could create substantial savings in water costs in 42 countries, including Australia, India, Mexico, Morocco and South Africa, as well as in California’s Central Valley and Egypt’s Nile Delta.

Some regions—the U.S. Midwest, for example—would continue to face water scarcities whatever crops were planted. But for at least 63 countries—many of which, like Ethiopia, Iran, Kenya and Spain, rely heavily on food imports—crop redistribution would deliver 20 percent higher levels of calories or protein, and increase self-sufficiency overall.

Research of this kind relies on considering local conditions and making judgments that will deliver the best returns to the farmers and their communities. Farmers have, traditionally, done just that.

But an average rise in global temperatures of around 1°C in the last century or so means that local traditions are in question. It is a given that the Mediterranean truffle Tuber melanosporum depends on the Mediterranean oak and the climate conditions of southern France and northern Italy. But UK researchers reported in the journal Climate Research that they have successfully cultivated a 16-gram specimen in Monmouthshire, in Wales.

Black truffles are one of the world’s most expensive delicacies. The success, attributed to climate change, was more or less accidental.

“This is one of the best-flavoured truffle species in the world and the potential for industry is huge,” said Paul Thomas of the University of Stirling in Scotland, and Mycorrhizal Systems Ltd, one of the co-authors.

“We planted the trees just to monitor their survival, but we never thought this Mediterranean species could actually grow in the UK—it’s an incredibly exciting development.”

Climate change will act as a global lottery: there will be winners. But as global population continues to grow, and extremes of heat, drought, windstorm and flood become more frequent, there may be many more losers.

The Nature Geoscience researchers argue that their recipe for agricultural change is a starting point, not a final answer. Harvest choices must be adapted to local conditions and local cultures.

“Our analysis shows that redistributing crops across lands that are cultivated at present can make use of the technologies and knowledge that are already present in a country to offer distinct benefits across food security and environmental spheres,” Davis and his colleagues wrote.

“In particular, our results are encouraging for several world regions that are grappling with water scarcity, food insecurity or a combination of both.”