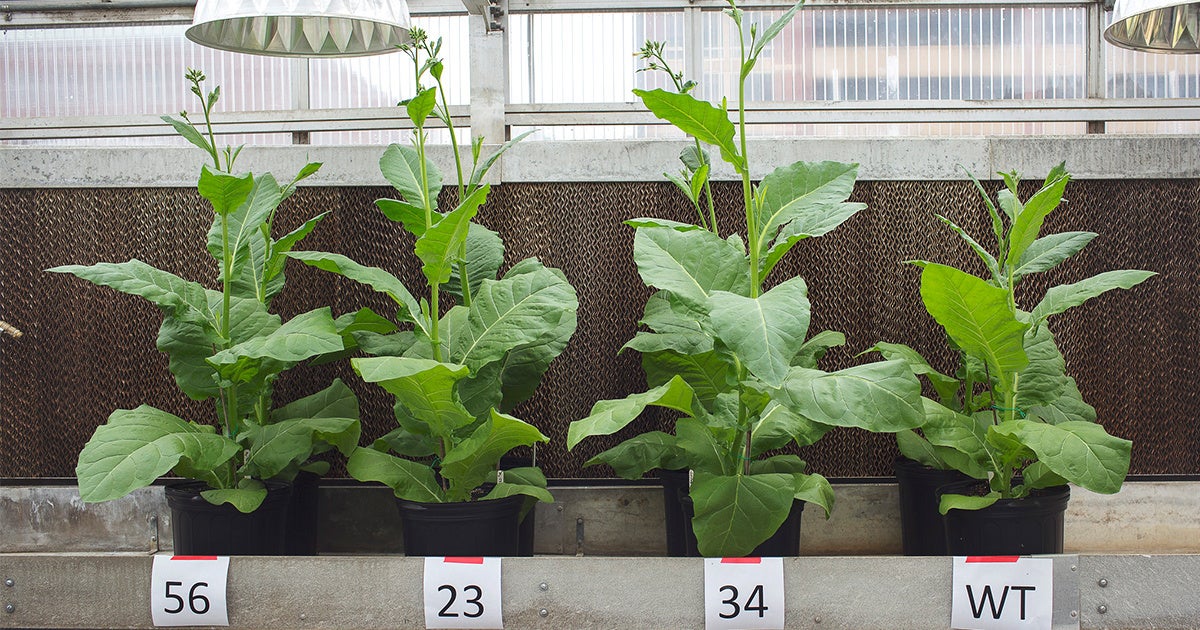 Can you imagine the entire population of the U.S., Canada, Mexico, Brazil, the UK and France going hungry?

You don’t need to imagine. That is exactly what happens every day when an estimated 815 million people around the globe go hungry. In the short term, the problem is likely to get worse as the population grows, diets change and urban sprawl forces farmers to produce more food on less land. Recent reports suggest that by the time children born today reach their 30s, the planet must increase food production by at least 70 percent.

As a biochemist, I started my career in biomedical research, but I shifted to agricultural research in 2013 because everybody needs to eat. Now I’m working with an international research project exploring how to boost food production. The goal of Realizing Increased Photosynthetic Efficiency (RIPE) is to increase the efficiency of photosynthesis—the process plants use to convert energy from the sun into the food we eat. In our most recent publication we’ve shown that it is possible to dramatically boost crop yield, by enabling the plant to get rid of its toxins more quickly.

It’s critical that we begin developing new crops now because it can still take at least a decade for agricultural innovations to reach farmers.

Photorespiration Is an Energy-Demanding Process

When it comes to photosynthesis, plants use sunlight to power a chemical reaction that converts carbon dioxide and water to sugars, oxygen and energy. But that isn’t the only chemical reaction that occurs in plants. A quirk in the evolution of the protein, called Rubisco, is that sometimes instead of converting carbon dioxide during photosynthesis, it uses oxygen instead. This produces waste products such as glycolate and ammonia, which can be toxic to plants and slow or stunt their growth.

To remove these toxic chemicals, another process needs to kick into gear. Photorespiration is a part of natural plant metabolism that recycles these toxins. It is a necessary process in major crops including rice, wheat and soybeans, as well as most fruit and vegetable crops.

Recycling these toxic byproducts sucks up a huge portion of the plants’ energy—and can inhibit a plant’s growth by more than 30 percent. At higher temperatures, plants tend to increase the amount of oxygen they convert, so as growing season temperatures rise and heat waves strike, up to 50 percent of the energy generated from photosynthesis can be required for photorespiration to recycle toxins in major crops like wheat and soybeans. That slashes yields in the hotter and drier regions of the world, such as sub-Saharan Africa and Southeast Asia, where food is most needed.

To meet the growing demand for increased food production, I worked with an international team to explore whether speeding up photorespiration might boost crop yields.

The work, led by professor Christine Raines and lead author Patricia Lopez-Calgano from the University of Essex and the U.S. Department of Agriculture-Agricultural Research Service (USDA-ARS), explored whether this modification could boost the production of tobacco plants. 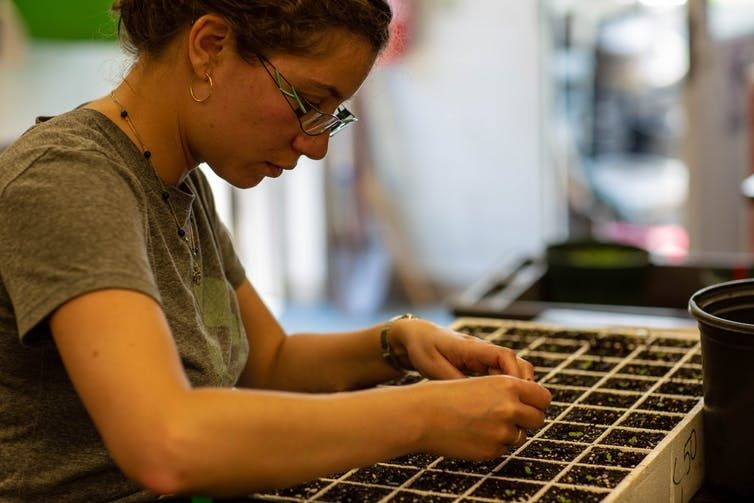 We managed to speed up the recycling of these toxins by designing plants that produce more of a protein, called the H-protein, that is already present in our crop plants and plays a role in photorespiration. Previous work in the lab using the small plant Arabidopsis, the “lab rat” of plant research, suggested that increasing the quantity of H-protein could speed up photorespiration and enable our plants to grow larger. Our team translated this idea from the lab to the field using a strain of tobacco, Nicotiana tabacum, which we grew outside at a research field station near the University of Illinois at Urbana-Champaign where I work as a USDA-ARS scientist.

We discovered pretty quickly that we had to carefully control the quantity of the H-protein we engineered plants to produce. Too much H-protein in all parts of the plant was harmful, stunting growth and reducing yield of tobacco leaves. Thus, we fine-tuned our approach and engineered plants that manufactured the H-protein only in the leaves. This increased photosynthesis and plant growth, probably because of faster recycling of the toxic chemicals.

We tested our hypothesis in tobacco because it is an excellent model for proof-of-concept research. It is easy to genetically engineer and only has a four-month life cycle, allowing us to conduct several trials in one field season. This allows us to test various genetic modifications in tobacco and then translate those discoveries to make improvements in targeted food crops.

To fine-tune the expression of the H-protein, the team engineered the tobacco using DNA from a close relative, Solanum tuberosum, or potato. Using a known sequence of potato DNA, we were able to boost the H-protein specifically in the desired leaf tissue. That proved to be the key to increasing yield without harming the plant.

Initially, I was skeptical that boosting the production of a single protein out of thousands in the plant could have such a dramatic impact on crop yield. But after two years of field trials, my colleagues and I have demonstrated that increasing H-protein levels leads to larger plants, boosting the crop yield by 27 to 47 percent. 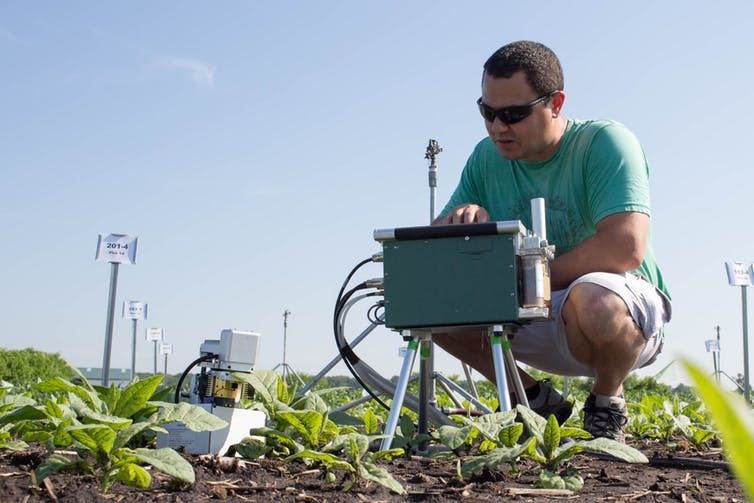 Author Paul South measures the rate of photosynthesis in the tobacco plants in a field site in Illinois. Claire Benjamin, CC BY-ND

You might wonder whether plants with extra H-protein are safe to eat? It is too early to answer that question. Once we have engineered “high H-protein food crops” these plants must be proved safe, which includes allergen and environmental impact before these transgenic plants will be approved by the FDA and USDA.

These Higher-Yielding Crops Would Be Genetically Modified Organisms

Because part of the DNA comes from a foreign source (potato), these plants are considered genetically modified organisms, or GMOs. There’s no doubt that the idea of using GMOs as part of our food source is quite controversial.

Many individuals have rejected the use of GMO technology, and some countries have prohibitions or restrictions of the use in their food supply. However, many studies have shown extensive evidence that GMOs are safe to eat, including this definitive report by the National Academies of Sciences, Engineering and Medicine. We believe it is important to have this technology to increase crop productivity so farmers and consumers will have many high-yielding options available to them. 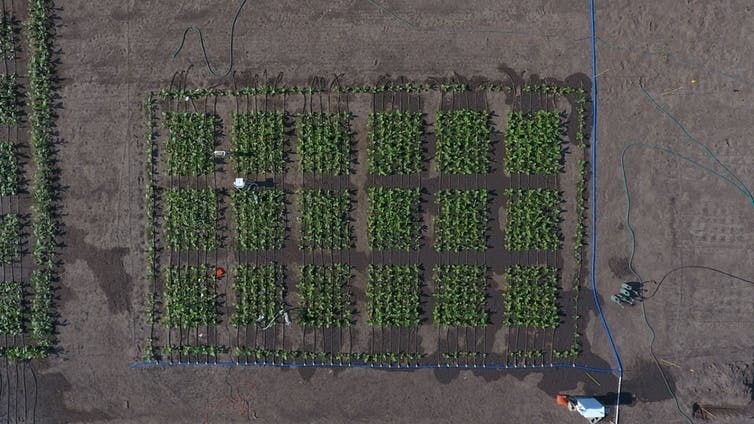 A shot of the field where South and his colleagues test their genetically modified tobacco plants. This image was taken by a drone in 2017. Beau Barber, CC BY-ND

There are different techniques to create new crops, including traditional crop breeding techniques, GMOs and more recently CRISPR-based gene editing technology—which allow us to directly rewrite a plant’s DNA without adding foreign genes. But regardless of the technique, the goal is the same: produce plants that can thrive in farmers’ fields to create a more secure and sustainable food supply for everyone.

Our next goal is to bump up levels of the H-protein in important food crops including legumes—soybean and cowpea—as well as the root crop cassava, which are major staple foods worldwide. If we can increase the production of these target plants by between 27 and 47 percent, similar to what was observed in this study, it will go a long way toward meeting the goal of feeding another 2 to 3 billion people by 2050.