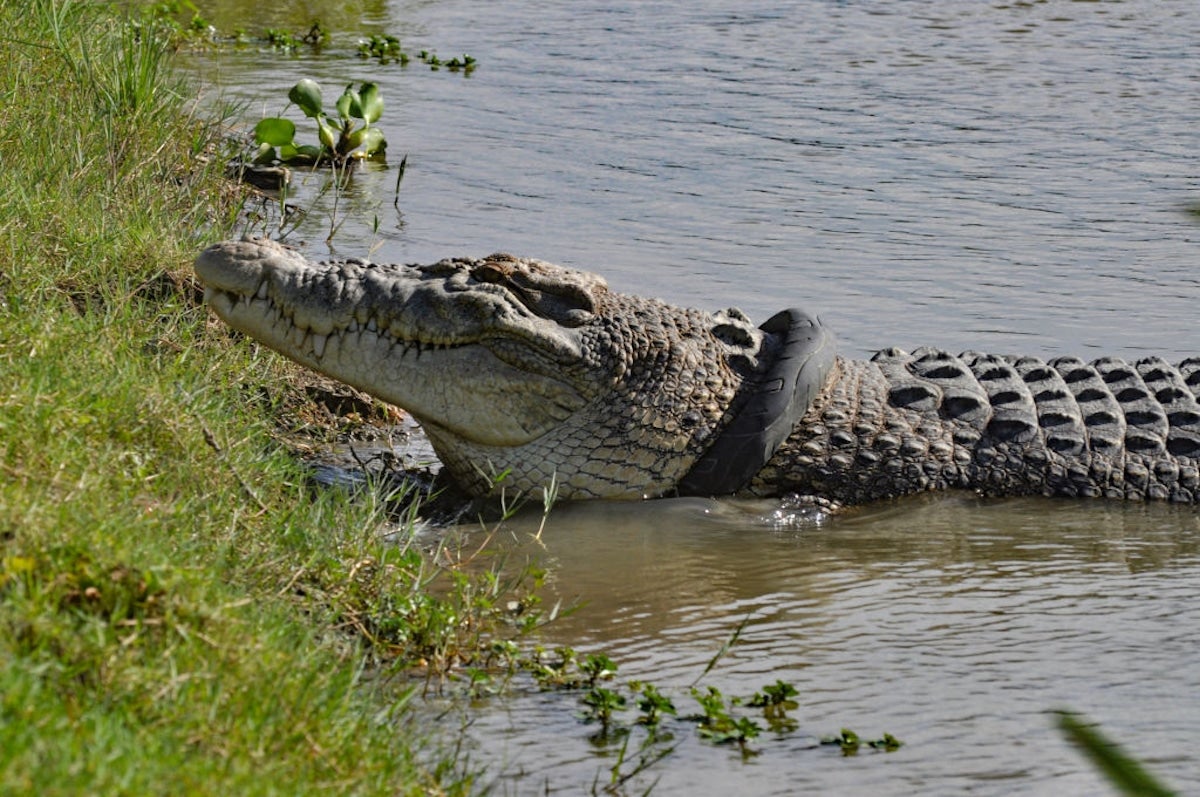 This crocodile is finally free from its tire necklace. NANANG / AFP via Getty Images

After more than five years, an Indonesian crocodile is finally free.

The crocodile was first spotted in 2016 in Palu city on Indonesia’s Sulawesi island with its neck stuck in a motorcycle tire, as AFP reported. Every attempt to rescue it failed, until a local resident finally managed to trap it on Monday.

The crocodile had come to be called “buaya kalung ban,” or crocodile with a tire necklace, Reuters reported. The reptile was around 17 feet long according to AFP and around 13.12 feet according to Reuters, and is one of the more than 30 crocodiles that makes its home in the Palu River. Tili used chicken bait and ropes to catch the crocodile, then local residents helped drag it to shore and free it from the tire, AFP reported.

The animal’s trials may have begun because someone attempted to use the tire to capture it as a pet, conservationists believe. Residents were concerned the crocodile would be choked by the tire if it continued to grow, according to Reuters, but for many years there didn’t seem to be much hope.

In 2018, conservationist and “animal whisperer” Muhammad Panji tried and failed to free the reptile, as CNN reported. The same year, Central Sulawesi’s Natural Resources Conservation Office attempted to bait it with meat, but that attempt did not succeed either. Both an earthquake and a tsunami that same year failed to dislodge the tire.

In 2020, the conservation office offered a reward to anyone who could free the crocodile. Australian crocodile wrangler Matt Wright and his friend Chris Wilson attempted to free the animal in February of that year, as Australia’s ABC News reported at the time. They worked for 10 days and used everything from steel traps to drones to harpoons, but could not catch the animal to free it.

“It definitely is one of the most difficult crocodiles I’ve had to catch in my career,” Wright said, as ABC News reported.

Eventually, the conservation office rescinded the offer over concerns the competition would actually put the animal at greater risk, according to AFP. However, it said that Tili would still receive a reward for his efforts.

Tili’s final rescue was not smooth sailing either. It took him three weeks and two failed attempts, as the first ropes he used were not strong enough.

“Many people were sceptical about me and thought I was not serious,” he said, as Reuters reported.

Finally free, the crocodile was released back into its river home Monday.

“Yesterday was a historic day for us, we are grateful the crocodile was finally rescued and we appreciate the locals who showed concern for the wildlife,” local conservation office head Hasmuni Hasmar said, as AFP reported.