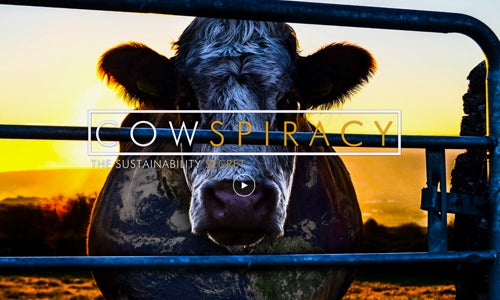 A recent documentary, Cowspiracy: The Sustainability Secret, asks why most leading environmental organizations are ignoring a leading cause of environmental damage.

In 90 minutes, co-producers Kip Andersen and Keegan Kuhn argue that our institutional and individual attention to selected environmental issues will not make a collective difference unless we also confront the realities of animal agriculture. Animal agriculture’s environmental effects are so pervasive that apparent progress elsewhere cannot counter its destructive and growing impact.

The film suggests why protection for expanded areas of the ocean will not protect oceans or ocean animals. Growing food organically, even on a commercial scale, will not protect the land. Keeping lumber operations out of the Amazon will not save the rainforest.

Here is some of the data gathered by the producers and woven into this powerful film.

Livestock uses 30 percent of the Earth’s total land mass, including nearly 50 percent of the U.S. mainland. The growing demand for animal farmland is responsible for 80 percent of Amazon rainforest destruction. (Palm oil production is second). With 160-million acres cleared or degraded annually for the animal industry, 40 percent of the rainforest will be destroyed in 20 years, affecting species survival and carbon sequestration.

Too many environmental groups are dodging this issue, but the cattle industry is steaming. One cattle association blogger reminds its members that it also takes a lot of water to make a T-shirt or produce a car.

The average American consumes 209 pounds of meat each year. Everyday, a person that eats a plant-based diet saves 1,100 gallons of water, 45 pounds of grain, 30 sq. ft. of forested land, the equivalent of 20 lbs. of CO2 and one animal’s life.

This issue is an environmental advocate’s dream come true. It requires no political action money, no corporate boardroom decisions, no re-negotiated food policy, no tax incentives. When we eat meat, dairy and eggs, we feed this growing catastrophe. Change will happen as quickly as we convince each other to change what we eat. While producing his film, Kip Andersen became a vegan.

Cowspiracy: The Sustainability Secret was self-funded by the producers and crowdfunded via Indiegogo. The marketing efforts for the film depends on community organizations to sponsor the film, promote ticket sales through their networks and fill a local theater. They bear no cost, only effort, and it is working. Cowspiracy showings are accelerating all over the country—during the last two weeks in October, the film will be seen in 35 locations.

Ward Pallotta is retired from social justice, nonprofit fundraising in Cleveland, Ohio. He and his life partner, Ann Urick, are members of VegSarasota and Transition Sarasota in Sarasota, Florida, and are advocates for safe and healthy food. Nine years ago they realized they were eating dangerously and switched to a plant-based diet.