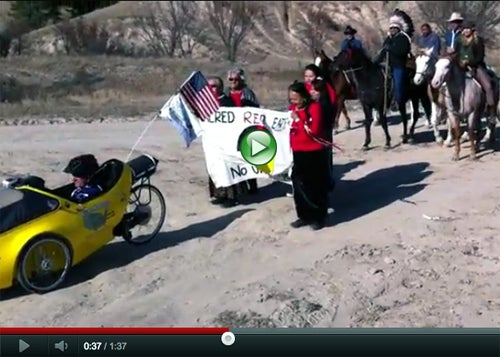 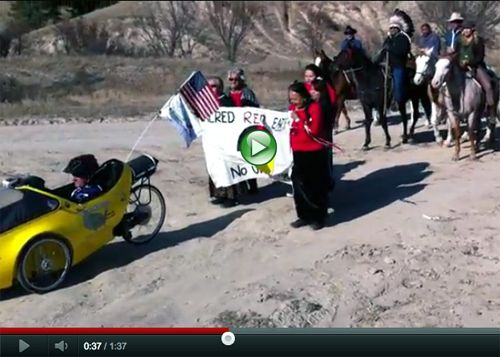 Sicangu Lakota Hereditary Chief John Spotted Tail, who participated in the ride, said, “The non-Indian, they took the Indian land and left us on reservations. And now the non-Indian is having it done to him. And now you see the Indian and the non-Indian standing shoulder-to-shoulder fighting this pipeline. It’s pretty amazing to see this happen.”

Daryl Hannah said, “The Alberta tar sands are incredibly dangerous to our food security and water security.” She later added, “We really need President Obama to fulfill his promise to get us off what he called the tyranny of oil.”

Paul Siemens, a rancher from Draper, South Dakota who also joined the ride, said, “The fact that a foreign corporation has the power of eminent domain is what got me into this whole thing. They threaten pretty much everyone with eminent domain.”

Oglala Lakota grandmother and activist Debra White Plume, who also joined the ride, said, “TransCanada’s pipeline would cross hundreds of waters and the Ogallala Aquifer, which is the direct lifeblood for 2 million people in this country. All that destruction so a foreign corporation can make a profit?”

“The Ft. Laramie Treaty of 1868 is an active agreement with the U.S. government and we intend to enforce this supreme law to keep TransCanada’s destructive pipeline off our land,” explained Floyd Hand, Oglala Lakota Buffalo Chief and Black Hills Sioux Nation Treaty Council Delegate.

The solidarity ride is part of the “Tour of Resistance” being led by renewable energy advocate Tom Weis, who is traversing the 1,700-mile proposed pipeline route in his rocket trike to highlight threats to the Great Plains and the Ogallala Aquifer. Daryl Hannah, Debra White Plume and Tom Weis were among 1,253 people arrested earlier this summer in front of the White House protesting Keystone XL.

“Nothing about Keystone XL is in America’s national interest,” Weis concluded. “It’s time for President Obama to stand up and fight for America by rejecting TransCanada’s permit.”