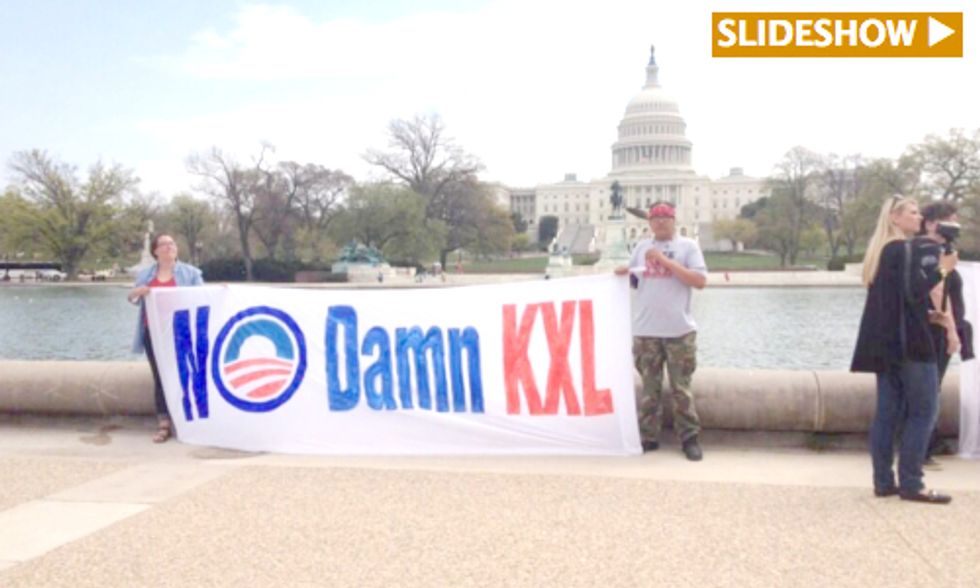 Earlier this year, the groups behind the Reject and Protect campaign and their supporters sent 2 million anti-Keystone XL comments to the Obama Administration in just 30 days.

Now, they're following that up by in-person resistance to the massive pipeline.

Through Sunday, the Cowboy Indian Alliance is camping out at Washington D.C.'s National Mall as an official protest to Keystone XL, the 1,179-mile pipeline that would extend from Canada to Texas. The opening ceremony took place on Tuesday, Earth Day, with 24 horseback riders leading the way for participating tribal communities, ranchers, farmers, Canadian First Nations and environmental groups.

“We’re here to show Obama, to show Washington D.C. the very faces of the people that the decision of the KXL pipeline represents,” Dallas Goldtooth, one of the activists from the Cowboy and Indian Alliance told a crowd on the mall, according to ABC.

The ceremony included the construction of tipis and the pouring of water fresh from the Ogallala aquifer—which Keystone XL would cross and pollute—into a reflecting pool that was the subject of a group-wide prayer.

The event will culminate in a march past the the Capitol on Saturday. According to Politico, as many as 5,000 activists could take part in the march.

"Keystone XL would carry 830,000 barrels a day of the world’s dirtiest oil, pumping dozens of coal plants worth of carbon pollution into the air," 350.org digital campaigner Duncan Meisel wrote in a blog. "I can think of no better way to spend Earth Day than with this powerful alliance who have travelled so far to tell President Obama to stop this pipeline once and for all.