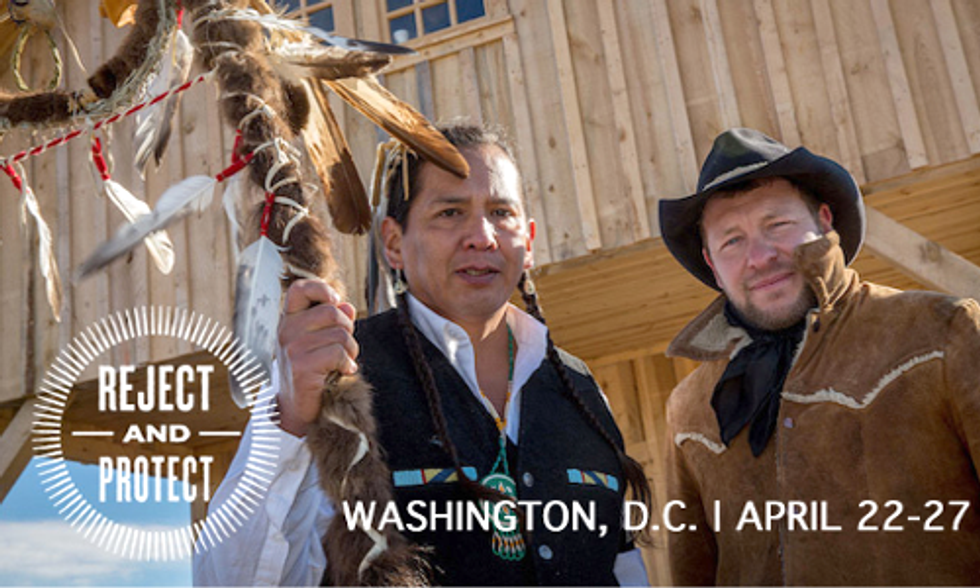 A coalition of tribal communities, ranchers, farmers, Canadian First Nations, environmental groups and communities along the Keystone XL pipeline route announced the new “Reject and Protect” campaign—a series of actions, tribal ceremonies and a march in Washington D.C. the week of April 22-27.

Reject and Protect is led by the Cowboy and Indian Alliance, from Nebraska and is supported by Bold Nebraska and several other organizations. Together, we will send a clear message to President Obama: "Reject Keystone XL."

On April 26, thousands of people will join them to stand together for a final message that the Keystone XL pipeline and the tar sands must be rejected—to protect this, and future generations.

Below is the official invitation to join the action in Washington D.C. from the Cowboy Indian Alliance:

On April 22, our alliance of pipeline fighters—ranchers, farmers, tribal communities and their friends—called the Cowboy Indian Alliance, will ride to Washington for the next, and perhaps final, chapter in the fight against Keystone XL.

On that day, we will set up camp nearby the White House, lighting our fire and burning our sage, and for five days, we will bear proud witness to President Obama’s final decision on Keystone XL, reminding him of the threat this tar sands pipeline poses to our climate, land, water and tribal rights. Throughout those five days, we will show the power of our communities with events ranging from prayers at Sec. Kerry’s home and an opening ceremony of tribes and ranchers on horseback in front of the White House.

On April 26, we invite our friends and allies against the pipeline to join us as we conclude our camp and march once more to the White House for our final, unmistakable message to President Obama. Our community of pipeline fighters just sent 2 million comments against the pipeline in just 30 days. We must follow this up with action in the streets on April 26 as we march with tribal leaders and individuals currently living with the risk tar sands to show all the beauty and power we represent. Everyone is needed and everyone is welcome.

With his decision closer than ever, President Obama must know what is truly at stake, and see once more the power of the alliances that have turned Keystone XL into a turning point for our movements, and for our future.

The Cowboy and Indian Alliance brings together tribal communities with ranchers and farmers living along the Keystone XL pipeline proposed route. Farmers and ranchers know the risk first-hand. They work the land every day. Tribes know the risk first-hand. They protect the sacred water, and defend sacred sites of their ancestors every day. They have united out of love and respect for the land and water on which we all depend.

This is not the first time Cowboys and Indians have come together to stop projects that risk our land and water. In the 1980s, they came together to protect water and the Black Hills from uranium mining and risky munitions testing. In the American imagination, “cowboys and Indians” are still at odds. However, in reality, opposition to the Keystone XL tar sands pipeline has brought communities together like few causes in our history. Tribes, farmers and ranchers are all people of the land, who consider it their duty as stewards to conserve the land and protect the water for future generations.

The Alliance asks President Obama a simple question: Is an export pipeline for dirty tar sands worth risking our sacred land and water for the next seven generations?

On June 25, 2013, President Obama said, “Our national interest will be served only if this project does not significantly exacerbate the problem of carbon pollution.” Anyone with common sense knows the Keystone XL pipeline would exacerbate the climate crisis: an 830,000 barrel per day pipeline filled with tar sands and chemicals like benzene will make it easier for tar sands companies to dig up and burn more of the world’s dirtiest oil than they could with any other feasible alternative.

Our actions next month will show President Obama that we are living up to his call to “be the change we wish to see,” and that we stand with him to say no to Big Oil. Together we will make a clear promise that if President Obama goes back on his word and approves the Keystone XL pipeline, he will be met with the fiercest resistance from our Alliance and our allies from all walks of life. Bryan Brewer, President of the Oglala Sioux, speaks for us when he says, “We are ready to fight the pipeline, and our horses are ready.”

Please join us this April to tell President Obama to reject the Keystone XL tar sands pipeline, and protect our land, water and climate.