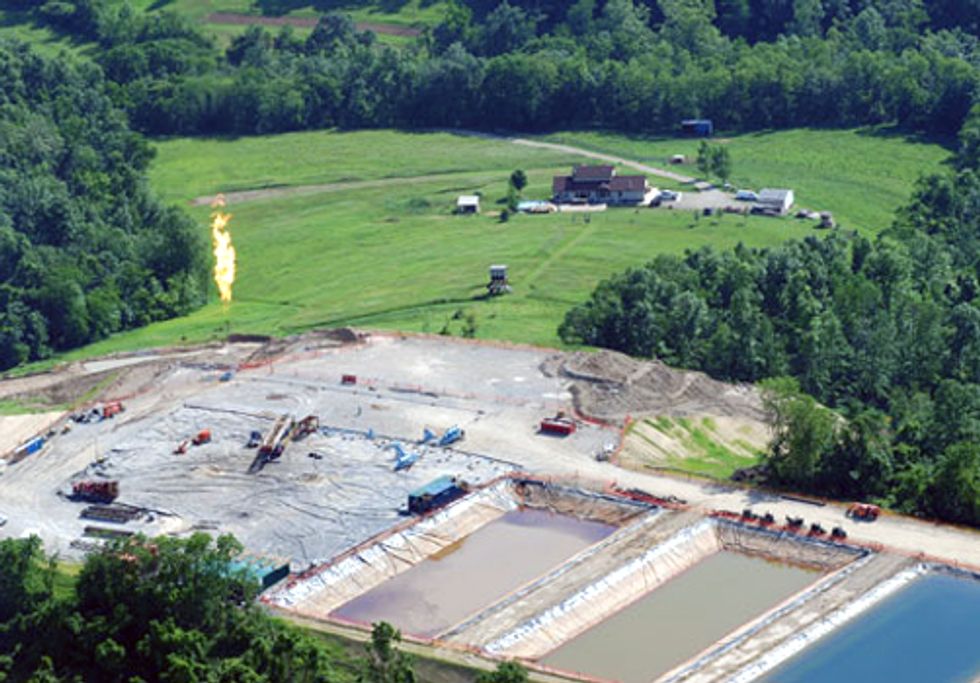 A prime example is that Act 13 permits drilling and fracking in all zones, including close to homes in residential zones as seen in this photo.

Opponents of Act 13, an amendment to the Pennsylvania Oil and Gas Act preempting municipal zoning of oil and gas development, won another victory Aug. 15 in Commonwealth Court. The court held oral argument on the question of whether its order declaring Act 13 unconstitutional and unenforceable should be stayed pending the Commonwealth’s appeal to the Pennsylvania Supreme Court. Under Pennsylvania’s appellate court rules, when the Commonwealth appeals from an injunction order, that underlying injunction order is automatically stayed during the course of the appeal.

The parties challenging Act 13—including the Delaware Riverkeeper Network and the Delaware Riverkeeper—filed a motion for relief from that automatic stay. In the ruling, the Commonwealth Court agreed that its order enjoining Act 13 should remain in place during the pending appeal. The Court found that the parties challenging Act 13 have a reasonable likelihood of success on appeal, that they would suffer irreparable harm without the injunction blocking enforcement of Act 13, and that there is minimal harm to the public by allowing the injunction to stay in place during the appeal.

“This injunction is essential to protect municipalities and the environment from further intrusion that would result if Act 13’s preemption of local zoning was allowed while we are awaiting Supreme Court action.  This rational decision is most welcome as we continue the battle forward to beat back industry interests”, said Delaware Riverkeeper Maya van Rossum.

Jordan Yeager, Esq., representing Delaware Riverkeeper Network, Nockamixon Township and Yardley Borough said, “This ruling prevents the chaos that would have ensued if the Corbett administration and gas companies got their way. We are pleased that the Court has once again reaffirmed gas company profits do not trump the constitutional rights of Pennsylvania residents and property owners.”

The legal challenge to the chapter of Act 13 that took over municipal zoning of oil and gas operations was challenged by seven municipalities, Delaware Riverkeeper Network and Dr. Mehernosh Khan in Commonwealth Court challenging Act 13 in March 2012. Act 13 not only amends the Pennsylvania Oil and Gas Act, preempting municipal zoning of oil and gas development, it establishes an impact fee on natural gas. The plaintiffs have challenged the new law on the grounds it violates the Pennsylvania and U.S. Constitutions and endangers public health, natural resources, communities and the environment.

In April, the Court issued a preliminary injunction against a portion of Act 13 ensuring that local zoning ordinances dealing with oil and gas operations remain in effect and were not immediately pre-empted by Act 13 on April 14, 2012.  On July 26, the Commonwealth Court declared the state-wide zoning provisions in Act 13 unconstitutional, null, void and unenforceable. The Court also struck down the provision of the law that required DEP to grant waivers to the setback requirements in Pennsylvania’s Oil and Gas Act.

For information on how local governing bodies can express support for the challenge to Act 13 click here.