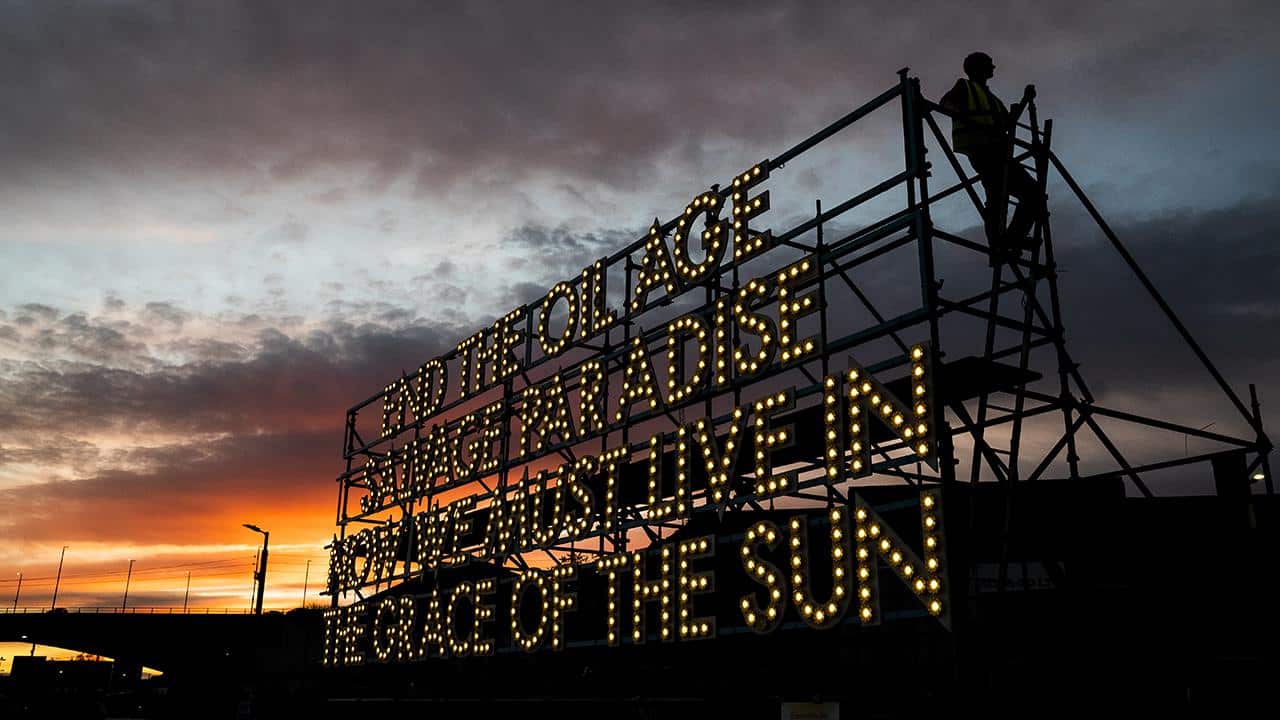 Sunset behind the 'Grace of the Sun' a giant solar powered light poem at the Sustainable Glasgow Landing Hub alongside the Glasgow COP26 campus on November 4, 2021. Jane Barlow / PA Images / Getty Images

For the first time ever, short and longer term commitments from world leaders could put the world on track for less than two degrees Celsius of warming.

The findings are the result of a snap analysis from Climate Resource, which found that major new announcements in the first week of the COP26 climate conference in Glasgow would limit global warming to 1.9 degrees Celsius above pre-industrial levels.

“For the first time in history, the aggregate effect of the combined pledges by 194 countries might bring the world to below 2°C warming with more than a 50% chance,” the report authors wrote.

This prognosis is much better than the UN Emissions Gap report released ahead of the Glasgow talks. This report found that the nationally determined contributions (NDCs) announced by nations at the time would put the world on track for 2.7 degrees Celsius of warming by 2100. That number fell to 2.2 degrees Celsius of warming if net-zero pledges were taken into account.

The difference between the UN’s estimate of 2.7 degrees and the Climate Resource analysis comes down to two major factors, the organization said.

However, the report only estimates what could happen if countries actually do what they say they will.

“The huge, huge ‘if’ here is if countries’ [climate pledges] are met, if they are implemented with actual domestic policies,” Professor Malte Meinshausen of the University of Melbourne and the Intergovernmental Panel on Climate Change (IPCC), who helped write the analysis, told The Independent.

The other major caveat is that the pledges that would limit warming to 1.9 degrees have deadlines decades from now.

“Any progress is welcome but we need extreme caution about declaring success on the basis of vague and often vacuous net zero targets three or more decades hence,” Ed Miliband, the shadow business secretary for the UK’s Labour Party, told The Guardian. “For example Australia has a 2050 net zero target but its 2030 plans are in line with 4 degrees of warming.”

Reducing emissions this decade is also crucial for limiting warming further to 1.5 degrees Celsius above pre-industrial levels, something the IPCC warns is essential to protect coral reefs and low-lying islands, and keep hundreds of millions of people out of poverty. To reach this target, emissions must fall to 45 percent of 2010 levels by 2030.

“The combined pledges of countries, both the conditional ones, and certainly the unconditional ones, are not yet sufficient to halt warming at around 1.5°C. Using probabilistic projections, the exceedance probability for 1.5°C is still around 90%, meaning wide scale increases of extreme climate events and the demise of the coral reefs, unless the pace of transition to net-zero emissions continues to accelerate rapidly,” the report authors wrote.