Could This Zero-Emissions, Triple-Decker Solar Plane Revolutionize the Aviation Industry? 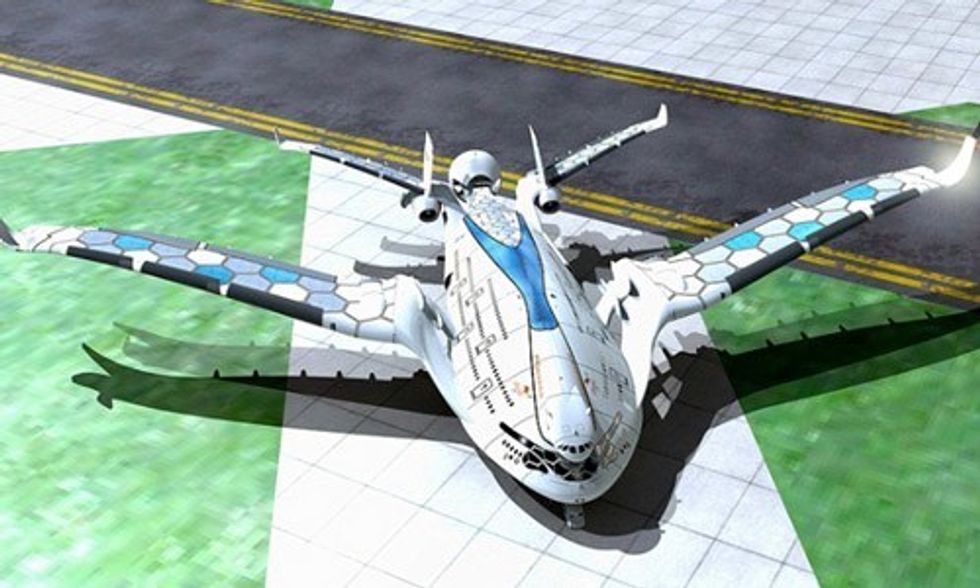 As the Solar Impulse 2 makes its historic round-the-world trip powered only by the energy of the sun, it's not so crazy to think that sometime in the future, commercial flying will abandon dirty fossil fuels.

The future of flight? The Progress Eagle has zero carbon emissions and is powered by renewables.
Photo credit: Behance

Well, the future of air travel might come sooner than we think, as Spanish graphic designer Oscar Vinals believes his conceptual zero-emission plane dubbed the "AWWA-QG Progress Eagle" could take off within the next 15 years.

According to CNN, the plane is powered by six hydrogen engines including a rear engine that doubles as a wind turbine. Solar panels on the roof and wings would also provide the ultralight plane with juice as it flies.

"The best aspect of the Progress Eagle would be its capacity to generate its own energy," Vinals told CNN, adding that the flight would be "noiseless."

Vinals' triple-decker aircraft could carry up to 800 passengers. The cockpit is located on the second floor, offering the pilots with panoramic views and a room with beds, coffee and workspace for the crew members. Because there's much more space than the standard commercial plane, there could be space for private rooms, shops and restaurants.

A whole new way to fly. With so much space on the three-storey plane, travel could be much less of a squeeze.
Photo credit: Behance

"Twelve hours in an airplane could feel more like a select hotel," Vinals said. "It would reduce the stress of a long flight."

With a 96-meter wingspan (about 314 feet), the plane is about as large as two Olympic swimming pools. But Vinals envisions that the wings could fold in order to reduce its size and meet international airport regulations. To compare a Boeing 777 has the wingspan of about 60 meters (197 ft).

Vinals described on the website Behance that the lightweight Progress Eagle is designed with “smart and self-repairing wings, composed by carbon nanotube and carbon fibers,” and a “hollow endoskeleton in an ultra-lightweight beehive-shape of titanium and graphene.”

Ever the aviation visionary, Vinals came up with a similar AWWA Sky Whale last year that could carry 755 passengers.

Hydrogen fuel energy as well as a wind turbine takes the plane into flight. Solar energy propels the plane while it's in the air.
Photo credit: Behance

Vinals admitted that modern technology is a little off from allowing his dream machine to take flight. However, he contended that "today we have about 40 percent of the technology needed to build it."

"Quantum solar cells, nanowires to kinetic power, micro radio wave harvesters—these technologies only exist in a limited scale at the best laboratories around the world," he said to CNN. "But in a few years, we could overcome our limits and build anything imaginable."

Whatever your thoughts are on the feasibility of a plane like this, the whole idea of carbon-free flying is something that could revolutionize the aviation industry.

Check out the video below to see Vinals' designs of Progress Eagle:

And the World’s Greenest Car Is …