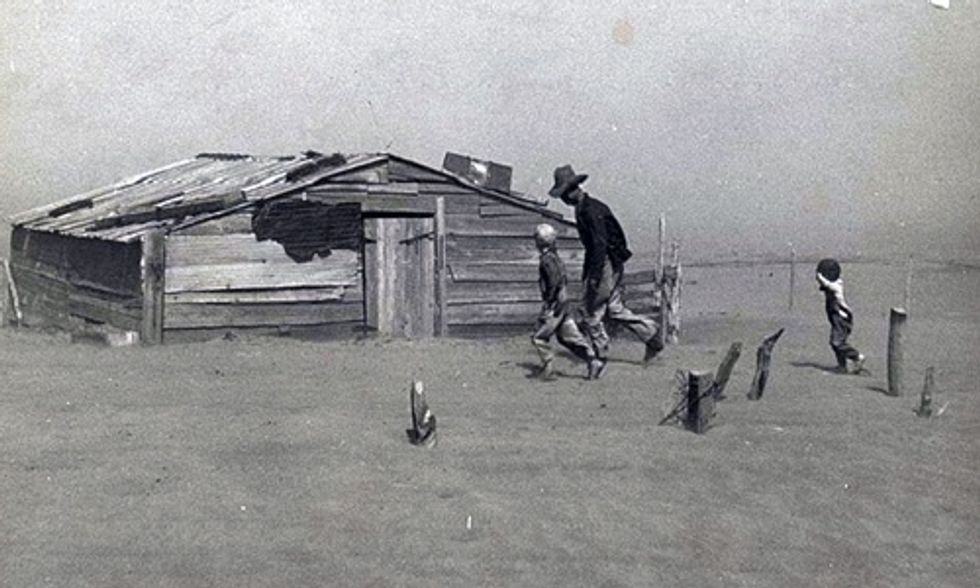 Oil wells and natural gas may have made individual Americans rich, but they have impoverished the great plains of North America, according to new research.

A farmer and his sons struggle through a dust storm in 1930s Oklahoma. Photo credit: U.S. Department of Agriculture via Flickr

Fossil fuel prospectors have sunk 50,000 new wells a year since 2000 in three Canadian provinces and 11 U.S. states, and have damaged the foundation of all economic growth: net primary production—otherwise known as biomass, or vegetation.

Brady Allred, assistant professor of rangeland ecology at the University of Montana’s College of Forestry and Conservation, and colleagues write in the journal Science that they combined years of high-resolution satellite data with information from industry and public records to track the impact of oil drilling on natural and crop growth.

They conclude that the vegetation lost or removed by the expansion of the oil and gas business between 2000 and 2012 added up to 10 million tonnes of dry vegetation, or 4.5 million tonnes of carbon that otherwise would have been removed from the atmosphere.

Net primary production—the biomass that plants make from photosynthesis every day, all over the world—is the basis of all wealth and food security. It underwrites all other human and animal activity.

Human wealth depends ultimately on what grows in the ground, or what can be dug from the ground, and most of the latter—such as coal, oil and peat—was once stuff that grew in the ground.

The same net primary production is the basis of what economists sometimes call ecosystem services on which all civilisation depends: the natural replenishment of the water supply, pollination of crops, provision of natural nitrogen fertilizers, and the renewal of natural habitat for wild things.

And what worries the conservation scientists is that this loss of net primary production is likely to be “long-lasting and potentially permanent, as recovery or reclamation of previously drilled land has not kept pace with accelerated drilling."

“This is not surprising because current reclamation practices vary by land ownership and governing body, target only limited portions of the energy landscape, require substantial funding and implementation commitments, and are often not initiated until the end life of a well.”

They say that the land actually taken up by wells, roads and storage facilities just between 2000 and 2012 is about 3 million hectares. This is the land area equivalent to three Yellowstone National Parks.

The hydraulic fracturing, or “fracking,” used to extract oil and gas is between 8,000 cubic meters and 50,000 cubic meters per well, which means that the total quantity of water squirted into the ground at high pressure during the 12 years to 2012 could exceed 33,900 million cubic meters. At least half of this was used in areas already defined as “water-stressed.”

The researchers considered the drilling of new wells in Alberta, Manitoba and Saskatchewan in Canada, and in Colorado, Kansas, Montana, Nebraska, New Mexico, North Dakota, Oklahoma, South Dakota, Texas, Utah and Wyoming in the U.S.

Although there is legislation, it is limited to lands subject to federal jurisdiction, and 90 percent of all drilling infrastructure is now on privately-owned land—at least, in the U.S.

The study’s authors want decision-makers to confront the challenges of this kind of ecological disruption. There are lessons from history in all this, they warn.

“In the early 20th century, rapid agricultural expansion and widespread displacement of native vegetation reduced the resilience of the region to drought, ultimately contributing to the Dust Bowl of the 1930s,” they write.

“It took catastrophic disruption of livelihoods and economies to trigger policy reforms that addressed environmental and social risks of land-use change.”