Could Federal Bill Lead to Death of Plastic Bags? 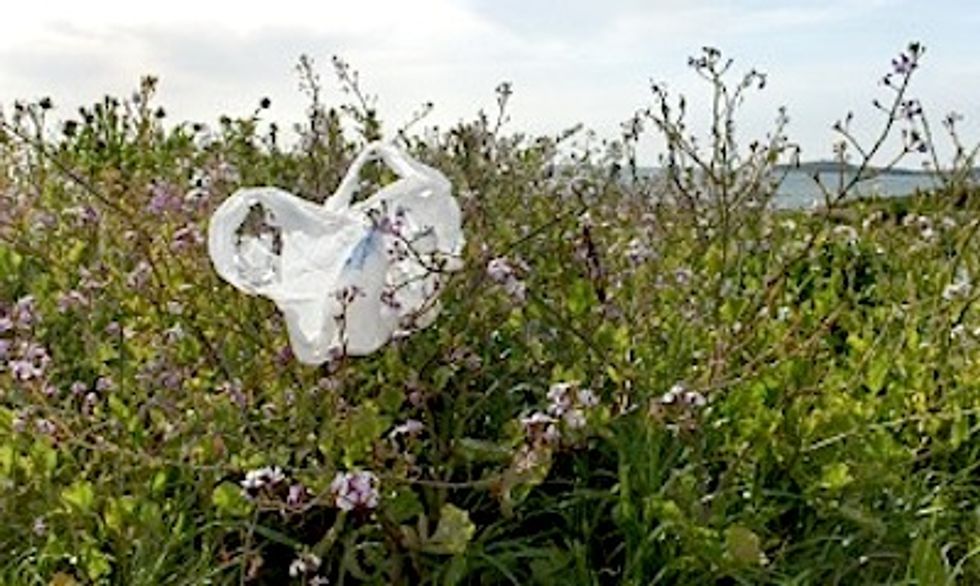 A mother otter in Moss Landing Harbor, CA, tries to free her cub from a plastic bag. Photo courtesy of the Central Coast Sanctuary Alliance.

According to Bag Monster, a bill is under consideration that would regulate single-use plastic bags in the U.S.

On Earth Day, the bill, Trash Reduction Act of 2013, was introduced into the U.S. House of Representatives. If passed, the bill would place a five-cent fee on single-use plastic and paper bags in every retail location across the country.

“According to the Environmental Protection Agency, the average American throws away about 4.4 pounds of trash each day. The results of this waste can be found in our oceans," said Rep. Moran (D-VA), who announced the introduction of the bill. "Small steps like replacing plastic bags with reusable ones yields large returns in reducing the amount of trash we create.”

The bill is modeled after Washington, D.C.’s disposable bag fee, which, since 2010, has reduced plastic bag usage from a monthly average of 22.5 million to 3 million bags. All revenue generated from the fee would be used to support the nation’s Land and Water Conservation Fund.

Although many U.S. cities and one state, Hawaii, have enacted plastic bag laws, the federal government has yet to pass any similar regulations.

The U.S. International Trade Commission reported that 102 billion plastic bags were used in the U.S. in 2009. As plastic items break down, any toxic additives they contain—including flame retardants, antimicrobials and plasticizers—can be released into the environment. Many of these chemicals may disrupt the endocrine system—the delicately balanced set of hormones and glands that affect virtually every organ and cell in the bodies of humans and animals. In marine environments, excess estrogen has led to discoveries of male fish and seagulls with female sex organs.

Plastic bags never biodegrade, and according to the Central Coast Sanctuary Alliance, the plastic bags that do get recycled can clog and slow sorting machines, making them a costly and inconvenient setback for recycling centers.

Stiv J. Wilson, of the 5 Gyres Institute, underscores the enduring damage perpetuated by our ravenous use of plastic bags in his introduction to a new video, Plastic Bags Are Forever:

One of the major barriers to implementing common sense plastic bag policies is that the plastic bag industry will often cite Life Cycle Analysis (LCAs) studies that only use carbon output as a measure of pollution, comparing paper and plastic. There is no attention given to the affect on marine life, nor the implications for human health as the apex predator of a marine food system (we eat fish that eat plastic that absorbs toxins). There is also no attention given to the fact that plastic bags do not biodegrade in the marine environment.

It's clear that the issue is much more complicated than the plastic bag industry will lead us to believe as evidenced by the footage used to make the following public service announcement. But even the argument stating plastic is less carbon emission intensive than paper falls apart when we look at what's isn't included in the existing LCAs. For example, the feedstock for plastic bags is ethylene, a byproduct obtained from natural gas refining.

The carbon footprint of obtaining the natural gas isn't considered in the LCAs either. Fracking, which emits methane, an incredibly potent greenhouse gas, accounts for 35 percent of the natural gas obtained in the U.S. With worldwide recycling of plastic bags decreasing and consumption increasing, more and more plastic bags are accumulating in the world's rivers, watersheds and oceans.