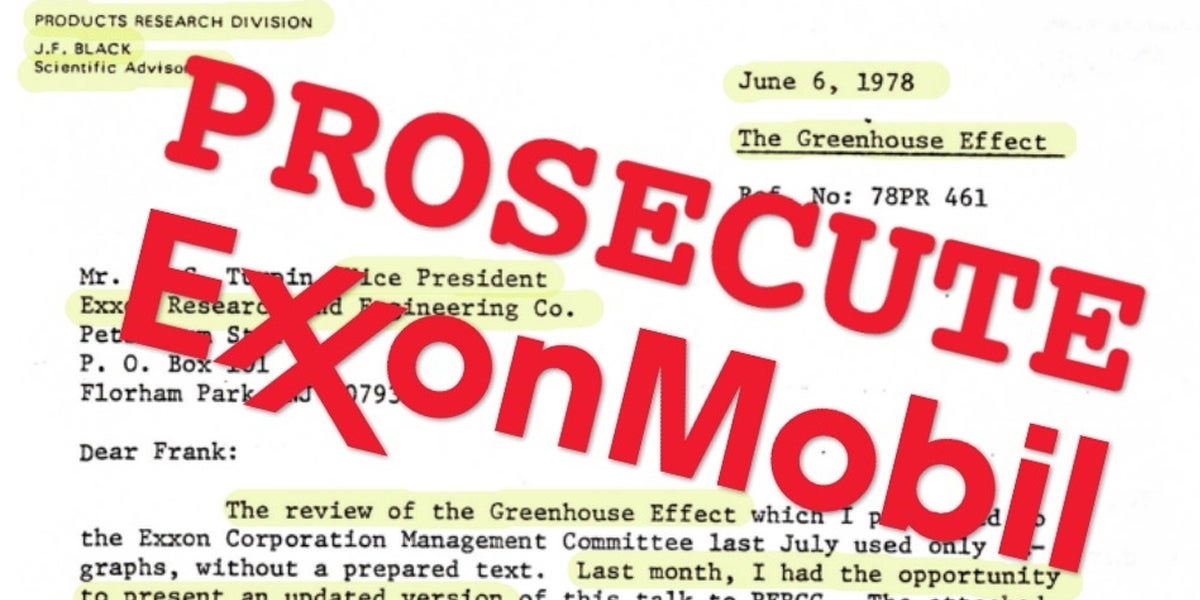 What a difference a few months make. Last year Exxon was on the ropes, reeling from the news that the company was under investigation for lying to the public and shareholders about the risks of climate change in the scandal that has become known as #ExxonKnew.

Furthermore, last October Exxon faced the humiliation of having to publicly admit that it was on course to cut its reported proved reserves of oil and gas by nearly 20 percent.

Fast forward a few months and we have Trump the climate denier in the White House, Exxon’s man, Rex Tillerson as Secretary of State, Scott Pruitt, a climate denier at the EPA and the prospect of Exxon being allowed back into the Russian Arctic if sanctions are lifted.

Life is looking up for Exxon.

And now comes the news that an East Texas lawmaker, State Rep. James White, R-Hillister, has drafted a bill which could prevent the company having to defend itself in the #ExxonKnew court cases as it would not allow a defendant’s theories on climate change from being used as evidence in a fraud case.

1. Fraud or a fraudulent or deceptive practice; or

2. Any false or misleading statement, representation or information.”

James White told the American-Statesman that when proposing the law, he had Exxon in mind. “There have been some instances where people could get thrown into court or even potentially threatened with some kind of criminal punishment based on their belief or scientific take on global warming,” he said. “I don’t think that’s how science should operate.”

At the moment White’s bill only relates to Texan law and the company faces other criminal cases, not least in Massachusetts and New York. Last month a Massachusetts judge refused to excuse Exxon from a request by the state’s Attorney General to hand over decades worth of documents on climate change.

The decision by Massachusetts Superior Court Judge Heidi Brieger was seen as a significant legal victory for the Attorney General, Maura Healey and a setback for the oil giant.

After the ruling Healey said on Twitter: “This order affirms our longstanding authority to investigate fraud,” adding that Exxon “must come clean about what it knew about climate change.”

But last week, Exxon applied to have this case moved to Texas, arguing that the attorney general had abused the company’s rights to free speech and that the investigation constituted an unreasonable search and seizure of corporate documents.

The legal move came the same day as Rex Tillerson was sworn in as Secretary of State.

“When out-of-state officials reach into Texas to violate the constitutional rights of a resident, it is proper for that resident to seek relief in Texas courts,” the Exxon brief states.

The must-read article reveals how the two men have been at war for years and not just on climate, but also over Trump University and the Trump Foundation.

“We are facing a crisis, not over conservative or liberal, but a crisis over whether or not the rule of law is respected or not, over whether the Constitution is respected or not and whether the central American notion of equal justice under the law and that everyone be treated with dignity and equality and fairness—all that is at issue now,” Schneidermann told a crowd after Trump’s election.

We also face a climate crisis. And for many people Exxon remains the number one villain and the company should be forced to account for its decades long climate denial campaign in court.

Because all the evidence points to the fact that #ExxonKnew.