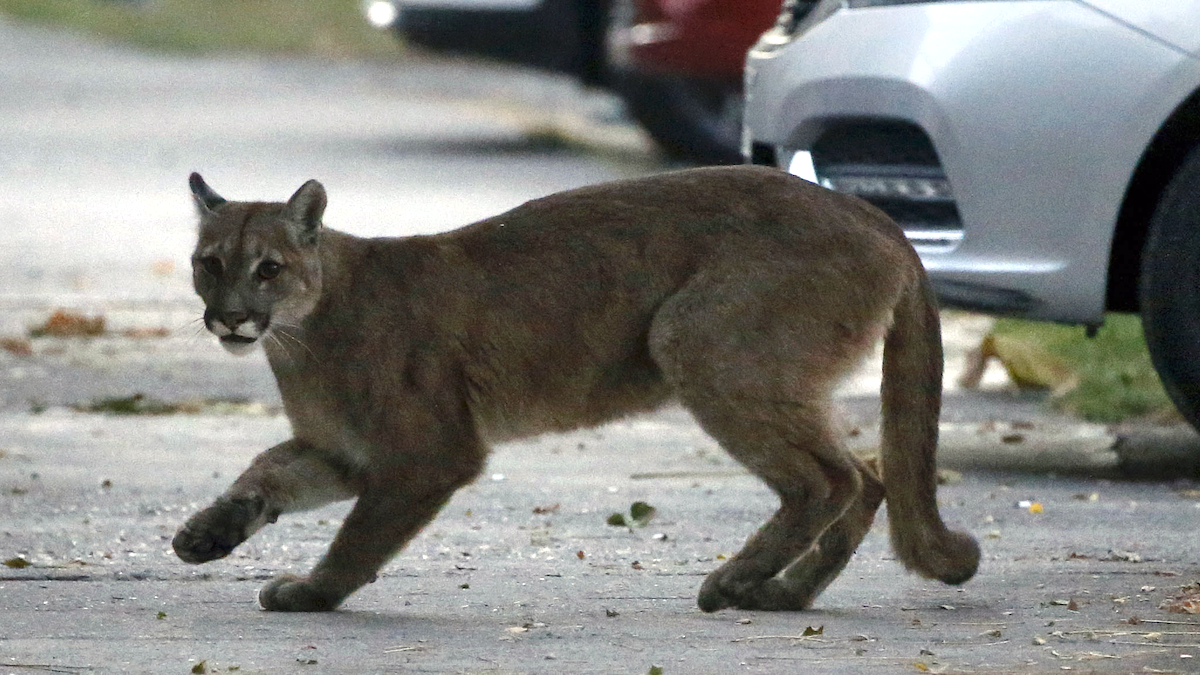 An approximately one-year-old puma in the streets of Santiago, Chile on March 24, 2020, in search for food as fewer people are outside due to the pandemic. ANDRES PINA / ATON CHILE / AFP via Getty Images

A third cougar has been sighted wandering through a residential neighborhood in the Chilean capital of Santiago as millions of the city’s residents are under lockdown measures in response to the coronavirus outbreak.

A video shared by the National Zoo of Chile shows the big cat being released at “dusk under strict security measures” darting from an enclosure back into its mountain landscape. The zoo adds that the big cat was captured in a private home on Monday and was in deemed in good enough health to release it the same day, according to a Facebook post.

Two other cougars have also been captured in the city as a majority of its six million residents are practicing quarantine and self-isolation measures amid the coronavirus outbreak. As people have moved inside for the last two weeks, wild animals often pushed to urban outskirts have been making their way into city centers.

“They sense less noise and are also looking for new places to find food and some get lost and appear in the cities,” Horacio Bórquez, Chile’s national director of livestock and agriculture service, said of the animals in a report by the BBC.

The foothills surrounding Santiago have also been experiencing a severe drought, which Reuters adds may be further pushing the thirsty felines toward urban centers in search of water. Central Chile has received 30 percent lass rainfall that normal over the last decade in what scientists have nicknamed a “megadrought.” Last year was particularly dry with rainfall deficits of 80 to 90 percent, according to NASA.

“An 80 percent deficit means that the semi-arid region north of Santiago has seen almost no water, as seen in the marked browning of the vegetation,” said René D. Garreaud, a scientist at the University of Chile. “South of Santiago has received some rain — 100 to 300 millimeters (4 to 12 inches). That is still not much, but it has been enough to keep the vegetation green.”

It is unclear whether wildlife is “rebounding” in the absence of humans or if they are simply taking advantage of a unique situation. In recent weeks, social media has shared videos of wildlife making its way to human-populated areas as if in response to global lockdowns – claims that National Geographic has challenged. Many of the reports – which include accounts of swans, dolphins, and even drunk elephants – are either misrepresented or a regular occurrence.

“The phenomenon highlights how quickly eye-popping, too-good-to-be-true rumors can spread in times of crisis. People are compelled to share posts that make them emotional,” writes the publication. “When we’re feeling stressed, joyous animal footage can be an irresistible salve. The spread of social phenomena is so powerful, 2016 research shows, that it can follow same models that trace the contagion of epidemics.”

As human populations grow and encroach on natural habitat, interactions between people and wildlife continue to increase. Protective regulations have further helped once-endangered animal populations to bounce back, further spurring potential urban-wildlife conflict. A 2019 study suggests that understanding animals living at the wildland-urban interface is necessary to ensure the safety of both animals and humans, which is “especially true for large carnivores” as these species are not always tolerated by the public.