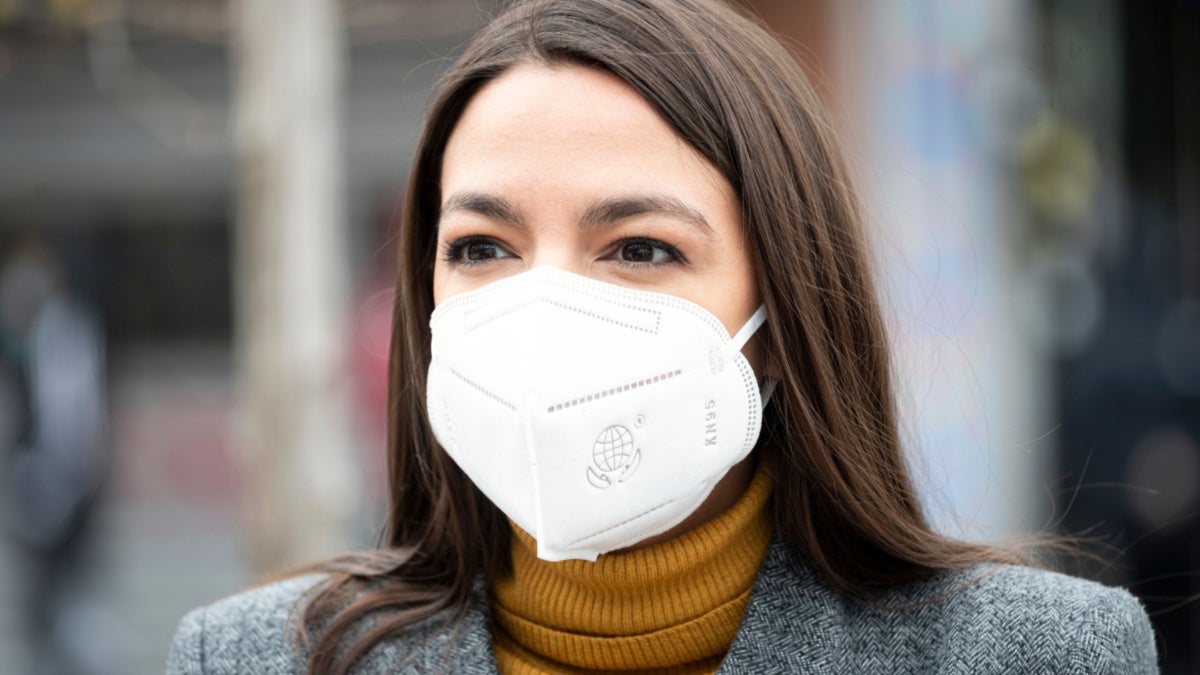 Democratic Congresswoman from New York Alexandria Ocasio-Cortez wears a face mask to protect herself from the coronavirus during a press conference in Queens on April 14, 2020 in New York City. Johannes EISELE / AFP / Getty Images

As the U.S. death toll from Covid-19 stood above 63,000 people Friday—with over a million confirmed cases nationwide—Rep. Alexandria Ocasio-Cortez introduced a bill in the U.S. House that would enable a federal relief agency to provide disaster assistance during pandemics.

The Democratic congresswoman represents New York’s 14th district, which—along with the rest of New York City—has been hit hard by the coronavirus crisis. The Pandemic Disaster Assistance Act was introduced in the upper chamber in March by Sen. Kamala Harris (D-Calif.).

The Federal Emergency Management Agency (FEMA) can currently only give financial assistance to individuals impacted by natural disasters, such as earthquakes, floods, and wildfires. Harris and Ocasio-Cortez’s bill would amend existing law to add pandemics to the emergencies that qualify for FEMA relief.

“Nearly 20,000 people in my district have tested positive for a deadly virus,” Ocasio-Cortez said in a statement Friday. “Thousands of my constituents are without work. We built temporary field hospitals in public parks. This is what a disaster looks like. FEMA needs to begin immediately dispersing aid to individuals hurt by Covid-19.”

In an emergency, relief isn’t just about getting resources, it’s also about of getting them out in time without unnecessary hurdles.

Proud to work with @SenKamalaHarris on clearing the red tape to let FEMA grant assistance to impacted families during pandemics. https://t.co/2heIUoy5bN

Under the proposal, following approval from a governor and the president, individuals impacted by a pandemic would be allowed to apply for Disaster Unemployment Assistance (DUA) and Disaster Supplemental Nutrition Assistance Program (D-SNAP), the federal benefits commonly called food stamps.

Those affected by an approved public health crisis would also be able to qualify for other assistance from FEMA. Specifically, Harris and Ocasio-Cortez highlighted help with medical, funeral, and childcare expenses as “critical” for people who have endured a pandemic like the ongoing Covid-19 disaster.

“We are in the midst of an unprecedented public health and economic crisis, and people are hurting,” Harris said Friday. “The magnitude of this crisis demands that FEMA treat those impacted by pandemics the same as it does when a natural disaster strikes.”

“That includes providing disaster food assistance, disaster unemployment assistance, and help paying for funerals,” Harris added. “I’m proud to partner with Rep. Ocasio-Cortez on this legislation to ensure the federal government uses every tool available to help the American people recover from this crisis.”

In addition to introducing the companion legislation to Harris’ bill Friday, Ocasio-Cortez—who is up for re-election this year—held a press conference at her campaign’s Bronx organizing base, during which she highlighted the efforts of community groups providing critical relief to her constituents.

As the Bronx Times reported:

The congresswoman announced a new fundraising drive for workers on the front line. To date, the campaign has raised nearly 0,000 for 15 community groups exclusively through grassroots donors. These groups are providing personal protective equipment (PPE) to front-line workers as well as financial support to undocumented families, service workers, the food insecure, and Amazon warehouse workers in her district.

The congresswoman is setting a new goal to raise million for these groups by mid-June. Representatives from some of the local community groups spoke at the press conference.

Ocasio-Cortez also discussed her campaign’s food relief program. Through a partnership with four local food banks and the support of grassroots donors and volunteers, the campaign has delivered more than 500 meals to constituents and is committed to delivering 2,000 by mid-June.

After the press conference, Ocasio-Cortez shared Instagram videos of her and other volunteers passing out food to local families. The congresswoman, who wore a face mask, railed against the federal government’s failed response to Covid-19.

AOC is out here IN THE RAIN delivering food, IN A WAGON, with money SHE raised, to people in her district because we don’t have federal policy that supports working class people.