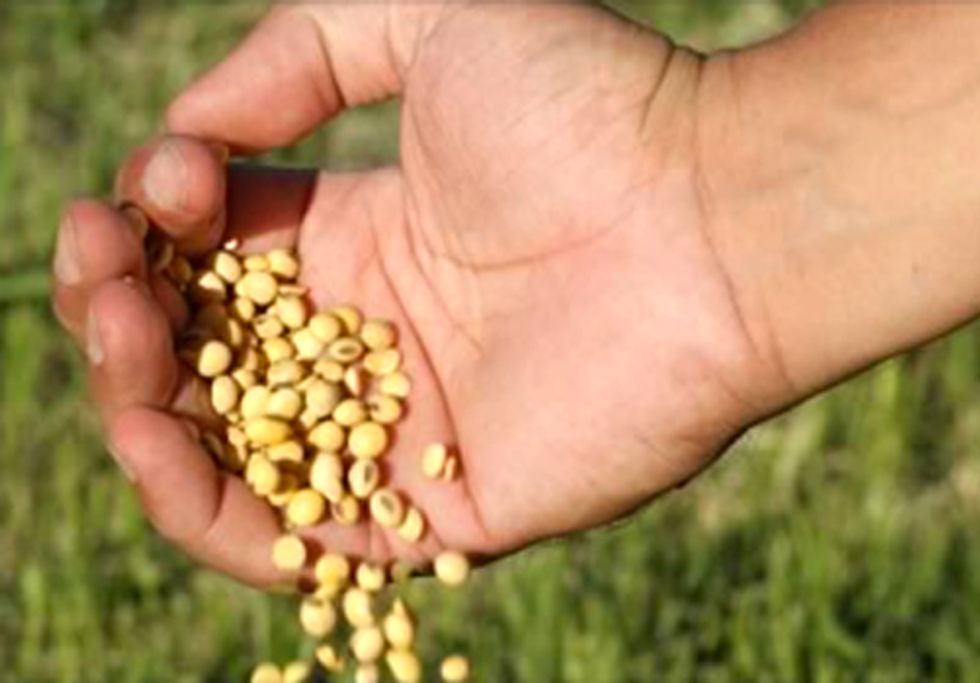 When arch-competitors Monsanto and Dow AgroSciences make a genetically engineered (GE) seed deal and both come out looking very smug, you have to wonder. When, five days later, Monsanto and Bayer CropScience announce a deal to cross-license their competing GE seed technologies with each other, you should probably start to worry.

What are all these deals about and why should you care? Because these agreements are the latest, most visible way that the Big 6 pesticide/biotech companies are speeding up the consolidation—and their control—of the world’s seed markets.

Cross-licensing GE traits has been going on among seed industry players for years, but the practice has now vaulted into high gear. As Hope Shand, former research director of the Erosion, Technology and Concentration Group notes:

With Monsanto et al. sharing and stacking their GE traits in the same seed product, farmers are running out of options. It is almost impossible these days for a Midwest farmer to find and purchase non genetically-engineered seeds or even choose among a variety of GE traits the one(s) that he or she might actually want to try.

Take SmartStax corn, for example. The seed includes eight GE traits owned by Monsanto, Dow and Bayer. And it comes with a higher price tag due to the extra licensing fees attached to each of the traits. Farmers don't get to choose which traits—if any—they want. They pretty much have to take whatever the companies have agreed amongst themselves to serve up.

The recent Monsanto/Dow trait-sharing deal is a good example of how all this corporate handshaking benefits a few huge companies at the expense of farmers, rural communities and the rest of us.

What's in it for Monsanto? By the terms of the agreement, Monsanto will get to use Dow’s controversial 2,4-D-resistant technology. Dow's 2,4-D-resistant trait enables crops to survive applications of the highly toxic herbicide, 2,4-D, which is intended to destroy weeds that have evolved resistance to RoundUp, Monsanto's flagship herbicide.

By adding 2,4-D resistance to its own seed products, Monsanto hopes to keep one step ahead of the superweed problem that now plagues 60 million acres of American farmland—and that Monsanto's own RoundUp technology created. But as I've explained before, 2,4-D-resistant crops are a very bad idea for the rest of us.

What's in it for Dow? You might be wondering why Dow would give Monsanto—a major competitor and arguably the biggest biotech bully on the block—its prized "solution" to RoundUp resistant superweeds. Well, as it happens, Dow wants Monsanto’s answer to the country’s growing superbug blues.

A little digging reveals that Monsanto's "Corn Rootworm III" technology—the one that Dow now shares rights to—is likely to be micro-RNA interference technology. This “gene silencing” biotechnology has become the hot topic in GE-based insect control. And as I’ve written before, its enormous danger lies in how very little we know about how gene-silencing technology really works. And what we do know is reason enough for concern.

Days after the Monsanto/Dow deal, Monsanto and Bayer finalized their own licensing agreement. Around the same time, Monsanto and DuPont abandoned their long and fierce legal battles and agreed to team up, while—not to be outdone—Syngenta and Bayer joined the cross-licensing brigade as well.

So just what can farmers expect out of all these cross-licensing deals? Stacks upon stacks of traits that they haven't asked for. More licensing fees. Skyrocketing seed prices. These and other disastrous consequence for farmers have been thoroughly documented in the seminal report, Out of Hand.

At first glance, these corporate deals can sound like so much legal gobbledygook. But they have real and very harmful impacts on society, on farmers' abilities to earn a living, and on the health of our food and farming system. This is why Pesticide Action Network stands with farmers in saying no to backroom corporate deals, and yes to putting seeds—and the future of farming—back in the hands of our farmers.