The Agrifood Atlas (pdf), which was jointly published by two German foundations and Friends of the Earth Europe, found that “two trends coincide in the agrifood sector: ever-fewer corporations are taking control of an ever-bigger market share and are gaining influence in many parts of the world. At the same time, the opportunities for civil society and social movements to oppose such developments are being restricted.”

“The fight for market share is achieved at the expense of the weakest links in the chain: farmers, and workers,” the report explains. “The price pressure exerted by supermarkets and food firms is a major cause of poor working conditions and poverty further back in the chain. It also promotes the onward march of industrial agriculture and its associated effects on the environment and climate.”

The atlas warns that further corporate consolidation throughout the global food chain will exacerbate issues that have already been perpetuated, in whole or in part, by past mergers among major companies in the agrifood sector. Those issues include:

“The increasing size and power of agrifood corporations threatens the quality of our food, the working conditions of the people producing it, and our ability to feed future generations,” said Mute Schimpf, a food campaigner at Friends of the Earth Europe. Schimpf urged the European Union to “play a leading role in rejecting these consolidations,” while commending “local food producers and citizens across Europe” who are “creating safe jobs and greener farms.”

Even so, Barbara Unmüßig, president of the Heinrich Böll Foundation, noted that “activists fighting for the right to access to water, land and seeds are met with ever more violent public or private repressions all across the world,” as “mergers and market concentration in the agricultural sector are skyrocketing.”

The atlas includes several graphics that depict the ongoing consolidation, including the biggest mergers of the past decade: 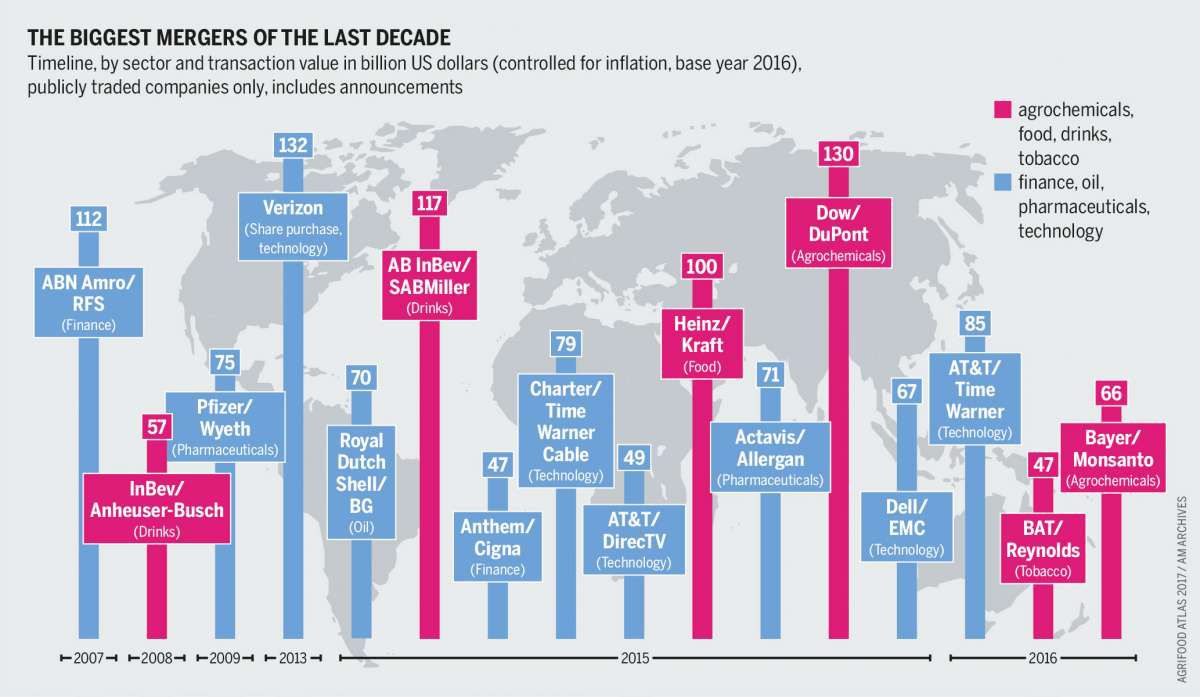 Benjamin Luig, coordinator of the food sovereignty program at the Rosa Luxembourg Foundation, explained that the report reveals how “private equity firms—rather than companies’ shareholders—are increasingly driving concentration in the agrifood sector.”

“Since 2004, one investment group, 3G capital, has led or accompanied mergers which have created the world’s largest beer company (AB InBev), the third-largest fast food company (Burger King) and the fifth-largest food processor (Kraft-Heinz),” Luig said. “Massive job cuts and the closing of bottling stations in the beverage industry are part of the plan. We urgently need regulations that limit the grip of the financial sector over the agrifood sector.”

The report celebrates that a “growing number of people are organizing themselves and are changing their buying habits,” but emphasizes “that is not enough to end hunger and poverty or to protect the environment,” noting that “the withdrawal of government from economic intervention is a major cause of the colossal environmental and climate damage and the global injustice that we see today.”

“It is high time for a socially and politically oriented regulation of the agrifood industry,” the report concludes. “We hope that this atlas will stimulate a broad-based social debate on this vital topic.”

“This report should be a wake-up call for anyone who cares about their food, countryside and rural livelihoods,” said Oliver de Schutter, co-chair of the International Panel of Experts on Sustainable Food Systems (IPES-Food).

“We are seeing an unprecedented surge in mergers and acquisitions in the food and farm sectors that will have major impacts on what we eat and what food we grow in the future,” de Schutter added. “We need an urgent debate and the proactive involvement of regulators to protect the public interest, workers and the environment.”