Corporations are NOT People—Time to Stamp Money Out of Politics 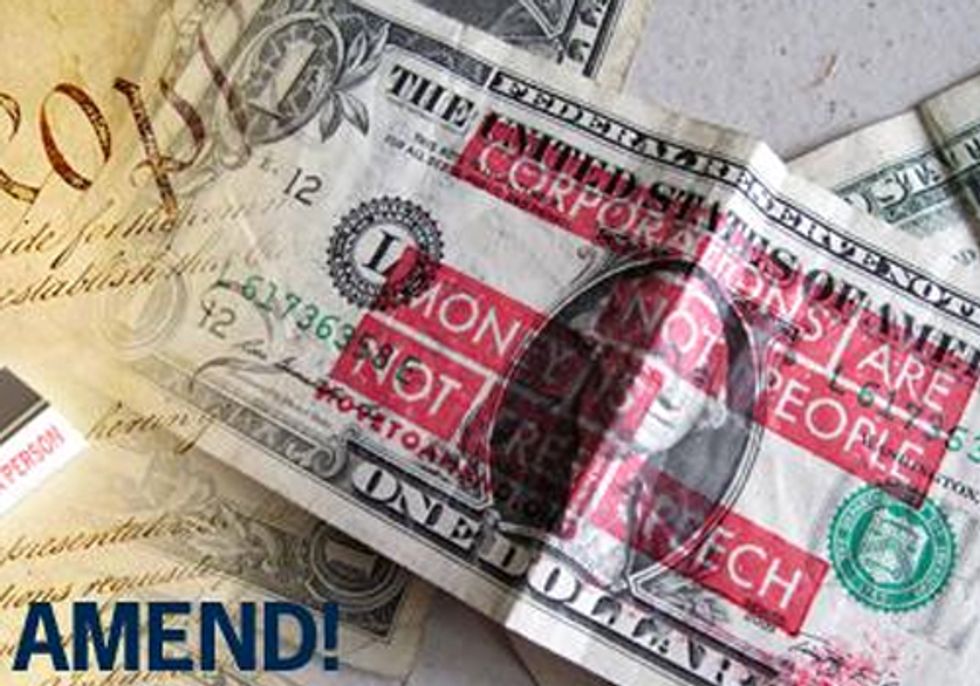 Today, Ben Cohen, co-founder of super-premium ice cream maker Ben & Jerry’s, and organizers with the Move to Amend Coalition, launched a bold new campaign aiming to return government to the hands of the people. The "Amend-O-Matic" is part art spectacle, part money-stamping machine, part road-worthy vehicle, and will allow participants to insert dollar bills to be printed with slogans such as "Corporations are not people," "Money is not speech" and "Not to be used for bribing politicians."

"This campaign is a way for citizens to express their outrage at the ties between big money and political corruption—and spread the word about the solution, which is a Constitutional amendment," said Ashley Sanders, a spokesperson for the Move to Amend coalition who will be traveling on the tour. “Our world is in terrible crisis, but we’re unable to heal it because We, the People, don’t control our own government. Stamping our money puts that message right in front of people.”

Cohen and Move to Amend are launching the Stamp Stampede today in support of a Constitutional amendment that reinforces the twin principles that money is not political speech (which would overturn the 1976 Supreme Court decision in Buckley v. Valeo), and that corporations are not people (overturning the 2010 Supreme Court decision in Citizens United). Polling indicates that nearly 80 percent of Americans are in favor of getting money out of politics, with a majority supporting an amendment to establish that corporations are not entitled to Constitutional rights. The Citizens United decision allows corporate money to drown out the voice of the people with over $2 billion expected to be spent to influence the 2012 presidential election.

“Stamping money is like a petition on steroids—its monetary Jiu-Jitsu and is truly making your money talk for little people,” said Cohen. “It doesn't matter what issues you care about—education, poverty, Wall Street, spiraling healthcare costs, you name it. At the end of the day, the absolutely massive amounts of money in our politics is at the root of our problems. That's why we have to stamp out the corrosive influence of money in our government and politics.”

Stamp Stampede also aims to have tens of thousands of Americans across the country use their own rubber stamps to print messages on currency supporting a constitutional amendment that gets money out of America's political system. As part of the kick off, stamps are being distributed across the nation. In addition, people can either design their own stamps at home, or they can purchase ready-made stamps from Stamp Stampede. More information on the campaign, along with downloadable designs that people can use at their local rubber stamp maker, can also be found on the website.

The tour kicked off in Los Angeles today. Among the cities that the Stamp Stampede will visit are Phoenix, Denver, Philadelphia and Boston, before winding up the tour in Florida in December.