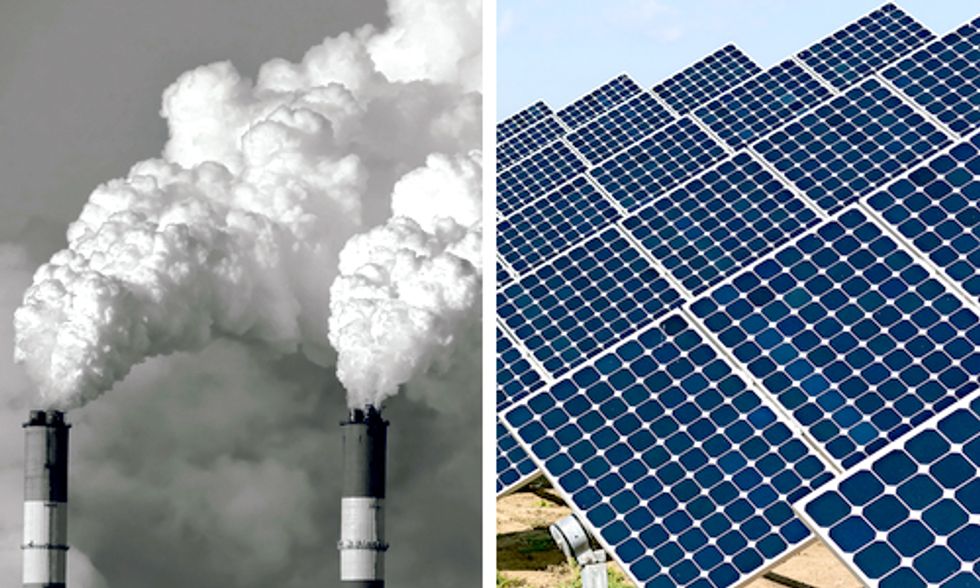 Unrestrained corporate power is the Ebola virus of our global ecological crisis. Rooting it out will demand a whole new level of resistance.

The worldwide march for the climate this weekend is focussed on moving us to a Solartopian energy supply, a green-powered Earth.

The core engine of our economy must at last be made directly accountable to humankind and our Mother Earth. Until that happens, we are an endangered species.

But those who march must also focus on the real core problem: the nature of the modern corporation.

As currently structured, the corporation's sole mandate is to make profit. Its insatiable need for more and more money, and its immunity from the consequences of its actions, are unsustainable in any sense.

Its fossil fuels heat our planet. Its atomic reactors threaten us all.

Meanwhile, solar, wind and other Solartopian technologies plunge in price while surging in efficiency. It's now abundantly clear they can power our civilization cleaner, cheaper, more reliably and with more job creation than old King CONG (Coal, Oil, Nukes and Gas).

In a free and open marketplace, they would have won long ago.

But it's the inherent nature of corporations to HATE the marketplace.

They always demand monopoly. They push complex, capital-intensive, centralized technologies that only they can control.

They fight off any social or ecological responsibilities. And they do not tolerate competition.

Not on the internet, where they want to kill net neutrality and monopolize the flow of ideas and information.

Nor from green energy technologies that threaten their profits and control.

Windmills have been around for centuries. The photovoltaic cell was born six decades ago. A 1952 federal report predicted 13 million solar-heated U.S. homes by 1975.

By all rights, we should already have a green-powered planet.

But in the fossil/nuke world it currently rules, King CONG is above the law. It’s been cheaper for the fossil/nuke corporations to wreck the Earth—and our health—than to protect them.

So now we must take the next step.

It's a great thing to march on climate chaos, and to finally know that our power can and must come in concert with our Mother Earth, rather than at war with her.

A carbon tax, environmental regulation, Solartopian technologies ... these all must be put in place.

But nothing truly lasting will happen until we eradicate the virus that's killing us all—the unrestrained corporate power over our lives and planet.

The core engine of our economy must at last be made directly accountable to humankind and our Mother Earth.

Until that happens, we are an endangered species.