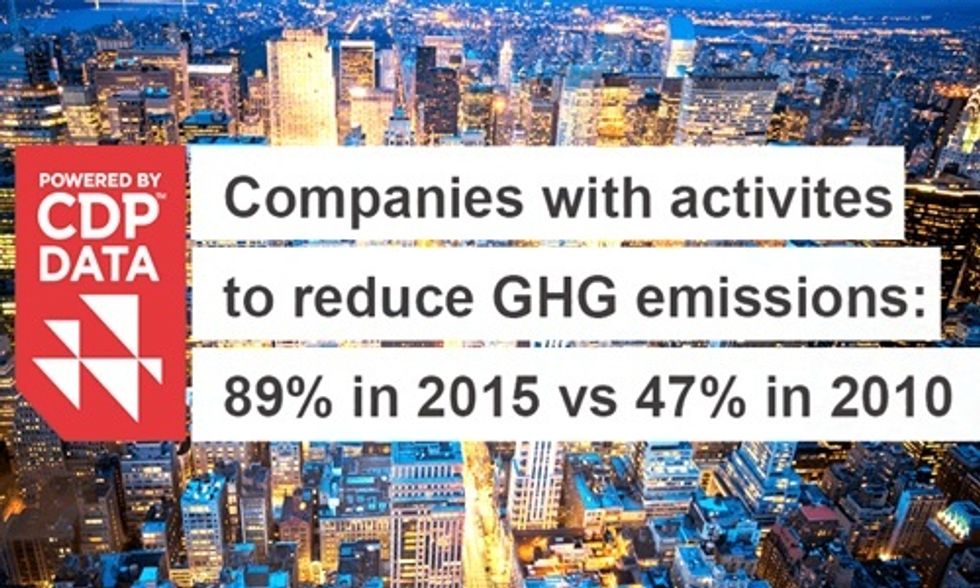 With less than one month to go until the most important climate conference of our time, the corporate and financial world have sent clear signals this week to the global markets that they are ready, willing and able to tackle climate change.

The influential not-for profit CDP, released the latest figures in its annual report on corporate carbon emissions disclosures on behalf of 822 investors representing US$95 trillion worldwide. It reveals the extent to which corporations have shifted their strategies over the past five years to become part of the solution to the climate challenge.

The report indicates that corporates have passed an important business tipping point with 89 percent of companies having activities to reduce GHG emissions. This is compared to less than 50 percent five years ago, before the ill-fated COP15 in Copenhagen.

This means that almost nine companies out of ten have decided to confront climate change seriously and measure their carbon emissions accordingly. And in business, what gets measured gets managed, improved and done.

CDP’s Executive Chairman and Co-Founder Paul Dickinson said “The momentum of business action on climate change suggests we have reached a tipping point, where companies are poised to achieve their full potential.”

The report also includes more than 100 "Climate A listers" who are leaders in reducing their carbon emissions and include three of the four largest corporations in the world, Apple, Microsoft and Google (the company that did not make the cut is ExxonMobil). This indicates that dealing with carbon emissions has become a leadership and competitive advantage issue for corporates.

In the finance world, Goldman Sachs, this week announced it was going to increase investments in clean energy to $150 billion over the next decade, multiplying its previous amount in that sector by almost four.

“It is our job to accelerate and lead this trend of allocating capital in technologies responsible for less carbon in the atmosphere,” said Lloyd C. Blankfein, chairman and CEO, Goldman Sachs.

To put this number in perspective, Citi and Bank of America invested about the same amount in fossil fuels in the last five years according to a new report from the Fair Finance Guide. And the world’s 25 largest private sector banks channelled at least $931 billion into fossil fuel companies in the period 2009-2014.

It seems that during the next 10 years, divestments will no longer be a side note for major global banks, it will clearly be a mainstream activity, expanding not incrementally but exponentially.

This is supported by two more reports this week. Firstly, there is a the continuing decline of divestments from the fossil fuel industry, as demonstrated by Sierra Club’s latest report on the record shutdown of coal plants in the U.S. The 2015 coal retirements alone equal as much coal capacity as the U.S retired in the 20-year period between 1990 and 2009.

This is complemented by another new report from Fossil Free Indexes. Their most recent analysis indicates that if you had divested your money, over the last 10 years, from companies that are among the Carbon Underground 200 (companies that have the largest as-yet-untapped reserves of coal, oil and gas), your investment returns would have been an extra 1 percent higher per year.

As the UNFCCC scrambles to find $100bn/yr to tackle climate change, these latest announcements will send a strong signal that the private sector and private capital markets are ready to support the transition to a low-carbon world. This should encourage and ease governments to make their own financial commitments and contributions for the Paris global deal.