Will Warmer Weather Curb the Spread of Coronavirus? 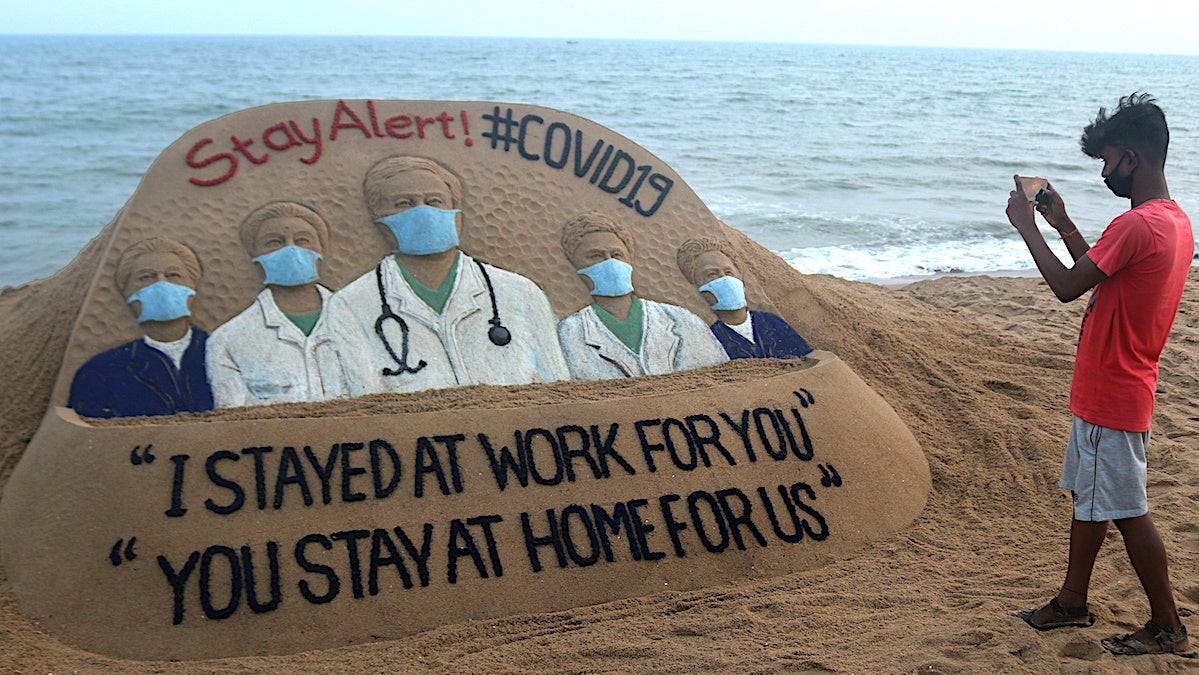 A coronavirus awareness sand sculpture at the Bay of Bengal Sea's eastern coast beach in India on March 20, 2020. STR / NurPhoto via Getty Images

As the world continues to cope with the onset of SARS-CoV-2, the virus responsible for the disease COVID-19, there is hope that the virus may follow the suit of similar respiratory illnesses and see a slower spread during the warmer months.

A growing body of evidence suggests a link between higher temperatures and decreased transmission rates of coronavirus while, on the other hand, a rising number of confirmed cases in countries now in the middle of their summer may prove otherwise.

Why the Warmer Months May Help

Flu and cold viruses tend to peak in the colder months and slow down during the summer. Despite popular belief, this has little to do with a virus’ ability to survive warmer temperatures and more to do with how people’s behaviors change during the seasons. During the winter, people tend to congregate and stay inside, increasing the number potentially exposed to one who is infected and contagious as well as meeting in large groups in places like schools and universities.

“Coronaviruses tend to be associated with winter because of how they’re spread,” Elizabeth McGraw, director for the Center for Infectious Disease Dynamics at Pennsylvania State University, told NPR. She adds that respiratory viruses spread through respiratory droplets that are more likely to see spikes in transmission rates during winter conditions largely due to the nature of the virus. For example, Influenza thrives in colder, dry conditions such as those present during winter in the northern hemisphere, which helps the virus to spread more easily from person to person.

Experts hope that the coronavirus will behave in a similar fashion as the warmer months approaches the northern half of the world, despite differences between Influenza and COVID-19. Even so, Nelson Michael, the director for infectious disease research at Walter Reed Army Institute of Research, said at a Pentagon briefing last week that it is possible that the virus returns again in the colder months, reports CNN.

Why the Warmer Months May Not Help

Then again, there is a possibility that warmer weather may not impact infection rates. Warm, humid environments are still seeing their share of confirmed cases. Argentina, Brazil and Australia are in the midst of their summer and are seeing increasing rates of infection and are actively monitoring the situation as it progresses. Experts caution that several factors will determine whether transmission rates decline in the coming months, such as government responses, the quality of medical care and population density, among others.

“The short answer is that while we may expect modest declines in the contagiousness of SARS-CoV-2 in warmer, wetter weather and perhaps with the closing of schools in temperate regions of the Northern Hemisphere, it is not reasonable to expect these declines alone to slow transmission enough to make a big dent,” explained Marc Lipsitch, professor of epidemiology and director at the Center for Communicable Disease. He adds that “even seasonal infections can happen ‘out of season’ when they are new” due to their “temporary but important advantage: few or no individuals are immune to them.”

Coronaviruses are a large family of viruses that are common in both people and many species of animals, according to the Centers for Disease Control and Prevention. It is rare for an animal coronavirus to infect and then spread between people, but such spread was noted in 2003 with respiratory illnesses caused by SARS-CoV and again with MERS-CoV in 2012. The first U.S. vaccine trial for the novel coronavirus began Monday but will likely take a year to 18 months to be fully validated, reports The Associated Press. There is currently no cure for the respiratory disease caused by the virus. Health officials advise that the best protection against infection and spreading continue to be non-pharmaceutical interventions like hand washing, sanitizing surfaces, social distancing and staying home when feeling ill. As of March 18th, the World Health Organization reports more than 191,000 confirmed cases resulting in just under 8,000 deaths around the world.

Recent research conducted by the National Institutes of Health, the CDC and several educational institutes suggests that the SARS-CoV-2 virus is stable for several hours to days in aerosols. The New York Times reports that timeframe may last up to three days, which means that people may become infected by the virus both through the air and after touching contaminated surfaces, further advancing the potential for spread when indoors. Children have also been shown to exhibit milder symptoms when infected with the virus, which could help further spread the virus as they remain active and attend social functions, reports IFLScience.