Coronavirus Cases Spike in the South, But Decline in the Northeast — Here’s How 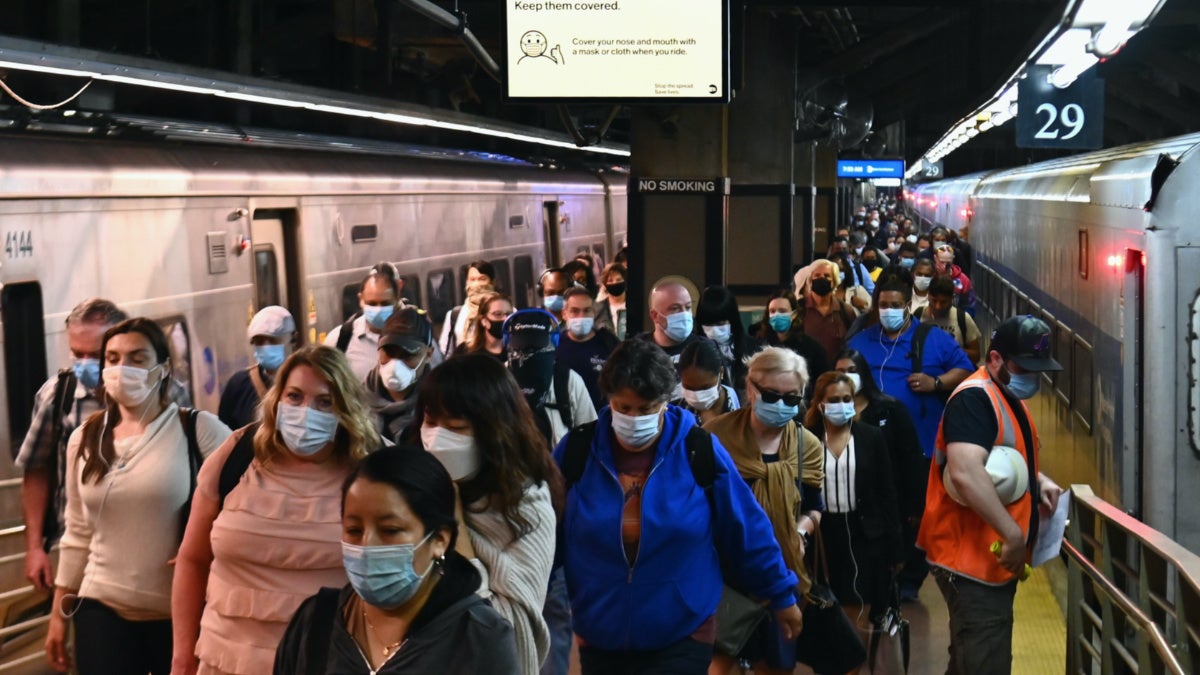 This is a headline I hoped to not see again after the number of coronavirus infections had finally started to decline in the Northeast and Pacific Northwest. However, the pandemic has now shifted to the South and the West – with Arizona, Florida, California and Texas as hot spots.

At the same time, cases, hospitalizations and the percentage of positive tests in Northeastern states have declined. New York Gov. Andrew Cuomo recently declared, “We now have the lowest transmission rate in the United States of America.” In fact, there are now more daily hospitalizations in Arizona than in New York, Pennsylvania and the entire Northeast combined.

What explains the difference?

My physician colleagues and I have learned a lot since a mysterious respiratory virus first appeared in mainland China over six months ago. We can now rattle off stats about the coronavirus as if we were sports commentators. It spreads through droplets and aerosols. It binds to ACE-2 receptors in the lungs. It can last on certain surfaces up to 72 hours. It can cause loss of taste and smell.

We could go on and on if you pressed us, but the most important thing we have learned is how it spreads and how to slow it down. A critical piece of that – and a key difference between the Northeast today and many of the areas where coronavirus is spreading now – is people’s behavior.

As a respiratory virus, SARS-CoV-2 is transmitted mainly through droplets that leave the mouth and nose as a person talks, sneezes, coughs or exhales. It thrives in environments where there are lots of people in enclosed spaces – especially if they are laughing, talking, singing or otherwise coming into close contact. It thrives physically in the same settings where we thrive socially.

This is why the early hard-hit areas were able to crush the curve by closing businesses and implementing stay-at-home orders. Without significant close human interaction, the coronavirus couldn’t spread.

While other states are now seeing hospitals fill with COVID-19 patients, most of the Northeast is maintaining control of community spread as its economies reopen. The difference reflects, at least in part, each state’s behavior expectations and the willingness of residents to keep up safety precautions like wearing masks, avoiding large crowds, maintaining social distance of at least six feet and staying isolated when they are ill or may have been exposed to the virus. 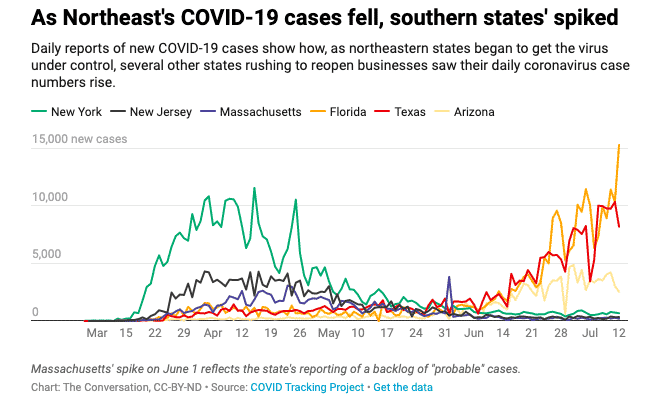 Rhode Island is an example. When the state began allowing businesses to reopen in early May, Gov. Gina Raimondo said success would depend on how people behaved – if they continued social distancing and wearing masks. Rhode Island is small, but it sits in the middle of the busy New York-Boston corridor. It was one of the first states to close businesses and schools, and one of the first to require people to wear face masks in public places. To locate the virus and stop its spread, it launched partnerships to make testing widely available and developed a contact tracing program with regular check-ins through a phone app. It also required travelers to self-quarantine for 14 days.

“We have to embrace new ways of living our lives,” Raimondo said in May.

Two months later, Rhode Island’s case numbers are down. The state still requires mask-wearing in public places, and, importantly, people do it. State inspectors found more than 90% of businesses were in compliance with mask-wearing rules over the July 4 holiday. 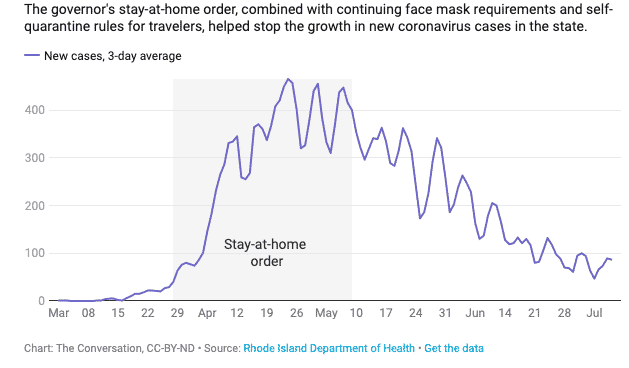 Northeastern states now lead the nation in mask-wearing and adherence to other best practices. An Axios/Ipsos poll showed that in states with high mask use, virus circulation is at lower levels compared to states with less mask use. Studies on the effects of how quickly coronavirus restrictions have been lifted around the world have found that slow, careful strategies have led to fewer illnesses and deaths during reopening.

In many parts of the Northeast, the months of illnesses, deaths and the struggle to turn the COVID-19 tide are still fresh in people’s minds. The progress isn’t uniform, however. New York City’s mayor has expressed concern about an uptick in positive cases among people in their 20s.

The Problems of a Political Divide

Elsewhere in the country, the current surge in COVID-19 cases began to pick up after Memorial Day weekend, when people in several states that hadn’t seen the same toll from the pandemic let their guard down. Video and pictures showed parties, barbecues, crowded beaches and political rallies – all with very little social distancing or mask-wearing – giving more fuel for the coronavirus to spread.

Despite the overwhelming evidence for what we should be doing, following the advice of public health experts has also, sadly, become politicized. Depending on the news sources people listen to, they might hear warnings from health officials being taken seriously or being dismissed by pundits and politicians.

In reality, the two should be partners, as these preventative measures are the best tools we have to reach our common goals of reopening businesses and schools safely. It’s the same reason we stop at stoplights and go through metal detectors at the airport – we make a small sacrifice for the greater public good.

For the foreseeable future, Americans will have to collectively agree to live life a little differently. Until we can all agree on this, the coronavirus will continue to have the upper hand, and our health and wealth will suffer.

Taison Bell is a Physician and Assistant Professor of Medicine, University of Virginia.

Disclosure statement: Taison Bell does not work for, consult, own shares in or receive funding from any company or organization that would benefit from this article, and has disclosed no relevant affiliations beyond their academic appointment.