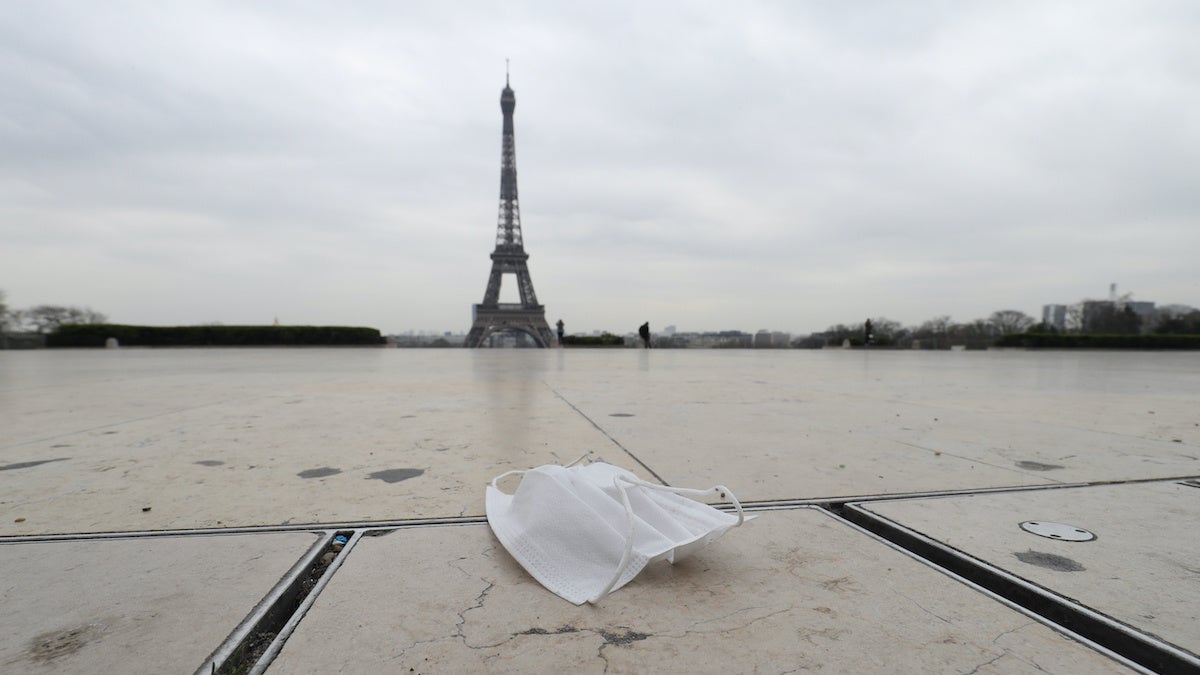 A protective face mask on the ground in front of the Eiffel tower in Paris on March on 17, 2020 while a strict lockdown comes into in effect to stop the spread of the COVID-19 in France. LUDOVIC MARIN / AFP via Getty Images

Widespread containment measures are due to go into effect across much of Germany, France and Spain starting on Tuesday. Non-essential businesses and shops will be closed and residents have been urged to remain at home.

11:29 Vietnam said it will introduce mandatory quarantine for people arriving from the U.S., Europe and ASEAN countries and suspend the issue of all new visas.

11:13 Iran’s health ministry said Tuesday that 135 more people have died from COVID-19, which raises the country’s official death toll to over 980. With over 16,000 confirmed cases, Iran is behind Italy and China for the highest number of COVID-19 cases worldwide.

11:00 A nationwide lockdown began in France at noon local time on Tuesday, requiring people to remain in their homes and only go out for the “bare essentials” like groceries, medicine and going to work.

There were reports of many Parisians crowding train stations attempting to leave the French capital for the countryside before the noon deadline. There were also reports of long lines of people outside supermarkets buying supplies in preparation for the lockdown.

The government said tens of thousands of police would patrol French cities, and anyone caught without a written declaration to justify their reason for being out could be punished with a fine of up to €135 (0), according to Agence France Presse.

French President Emmanuel Macron said in a speech Monday that the lockdown would be in place for at least 15 days. “We are at war” with coronavirus, said Macron. France currently has over 6,600 confirmed COVID-19 cases and 148 deaths. 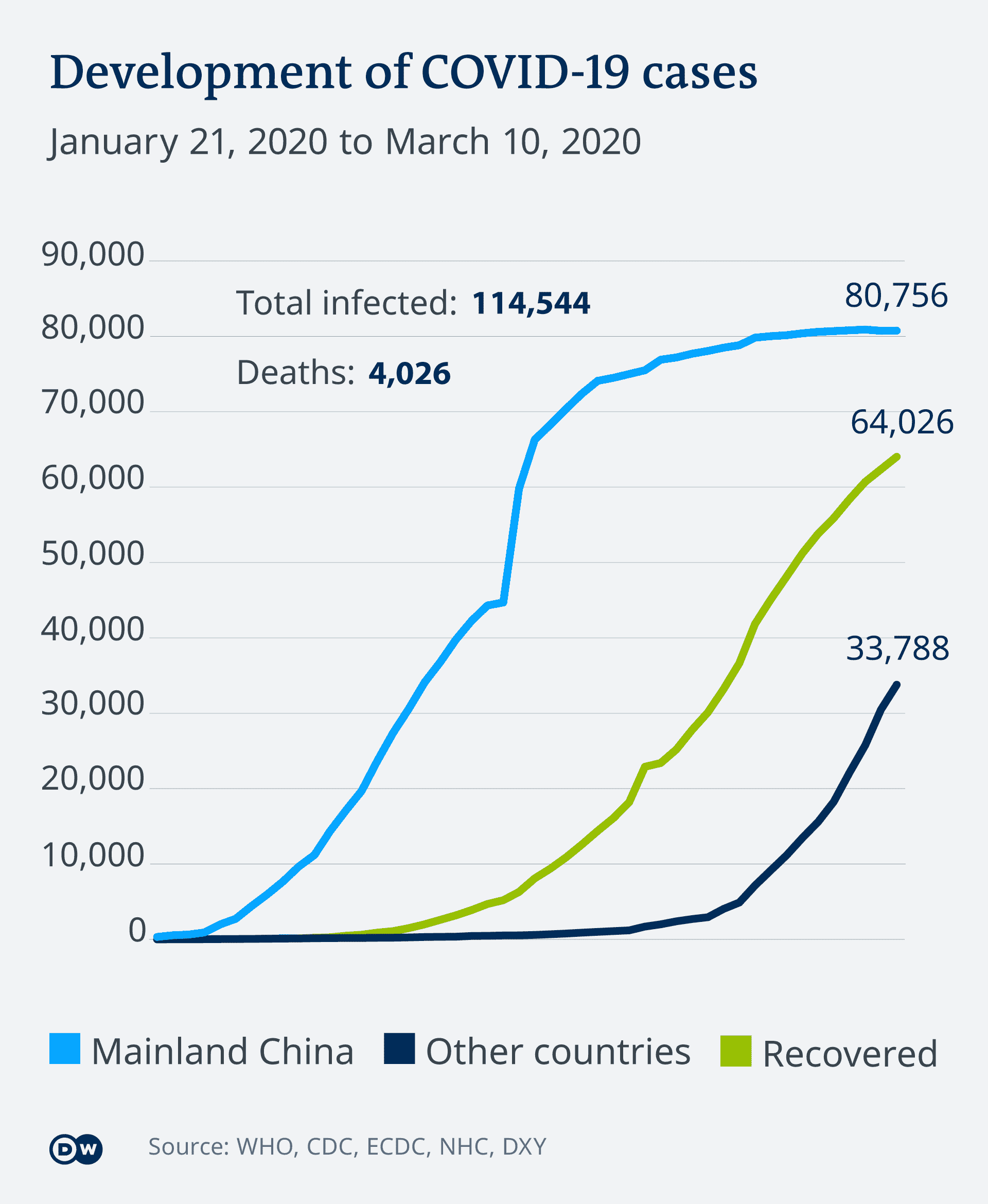 10:10 The Robert Koch Institute (RKI), a German public health institution, adjusted its coronavirus threat risk for Germany from “moderate” to “high” on Tuesday.

RKI chief Lothar Wieler said the risk adjustment is based on the continual increase in new infections, along with warning signs from public health facilities. Germany currently has over 7,000 confirmed COVID-19 infections.

09:45 The Robert Koch Institute said Tuesday that the coronavirus pandemic could last two years, as pandemics tend to run their course in waves.

RKI chief Wieler said it is possible in an “extreme situation” that some of the restrictions enacted by countries would have to stay in place for this duration.

Wieler added that the duration of the pandemic depends on the speed of vaccine development, along with how many people become infected, recover, and develop immunity to coronavirus (SARS CoV 2), the virus that causes COVID-19.

09:21 Turkey’s Foreign Ministry said it will start bringing home more than 3,600 Turkish citizens stranded in nine European countries. All of the returnees are expected to be transported home Tuesday on board more than 30 Turkish Airlines flights and will be quarantined after arrival for 14 days.

09:09 Pakistan confirmed its first fatality from a COVID-19 infection, Reuters reported. The death comes as the South Asian country saw a spike in cases Tuesday, with the current total at 187.

Maas said Tuesday Germany will do “everything possible” to repatriate German citizens stuck in countries heavily affected by the coronavirus, including the Philippines, the Dominican Republic, Morocco and Egypt. The foreign minister also advised against all tourist travel to any country.

“Stay at home. Help yourself and others,” tweeted Maas. 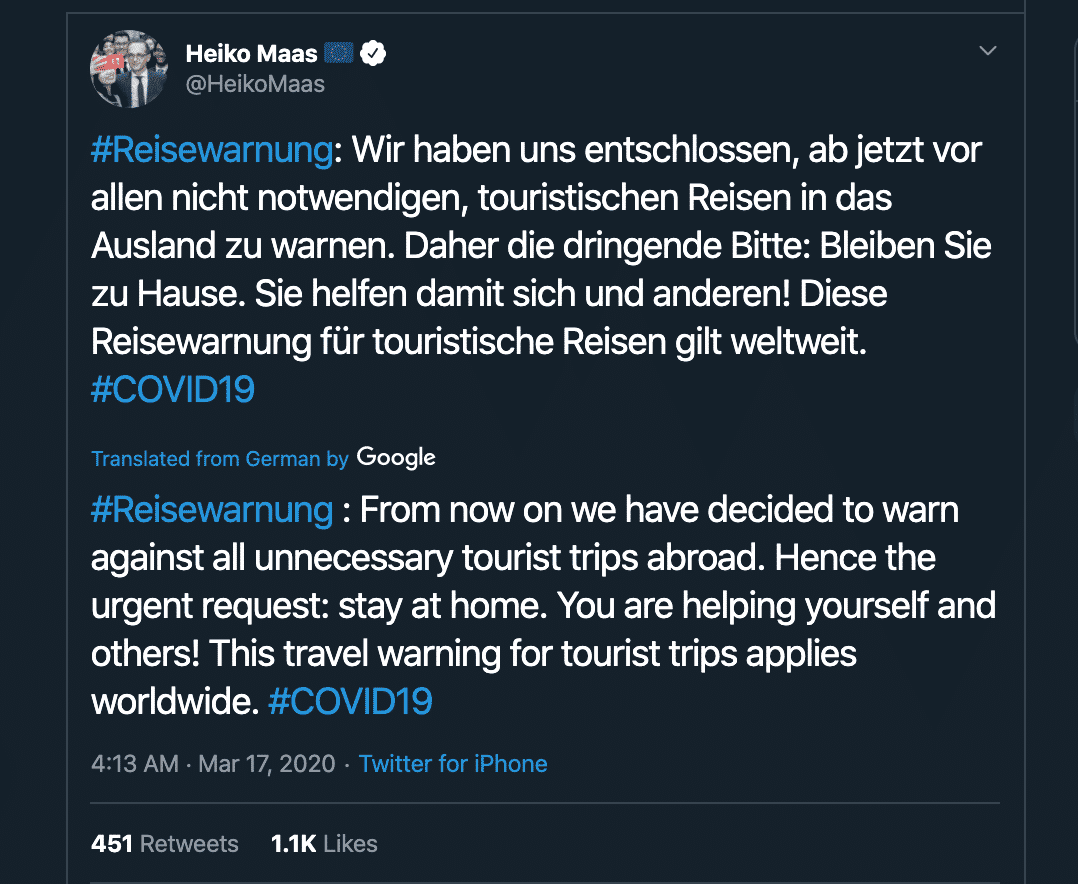 08:00 German carmaker Volkswagen announced it would stop production at the vast majority of its factories in Germany and the rest of Europe starting Friday. Work is expected to be halted for up to three weeks.

07:46 German Economy Minister Peter Altmaier said he expects Germany will have to “deal with the consequences” of the coronavirus outbreak until at least the end of May.

“I wouldn’t advise anyone to bank on this being over in eight days,” Altmaier told German broadcaster RTL on Tuesday.

07:14 U.S. drugmaker Pfizer and Germany’s BioNTech announced they would immediately begin working together to develop a vaccine.

06:31 Actor Tom Hanks and his wife, Rita Wilson, were released from an Australian hospital Tuesday five days after they were diagnosed with COVID-19. The couple will now self-isolate in a rented house, according to media reports.

05:55 Kyrgyzstan has banned entry to all foreigners to prevent the spread of coronavirus. The central Asian country currently has no cases of COVID-19. Neighboring Kazakhstan reported an increase in cases from 14 to 27 on Tuesday.

05:30 Japanese authorities will ask all travelers coming from Europe, including Japanese citizens, to self-quarantine for two weeks after arrival in Japan, according to Japanese media reports.

Japan will also begin refusing entry to foreigners who have been in certain areas of Spain, Italy, Switzerland and Ireland.

05:23 Malaysia said it will bar border crossings with Singapore for two weeks starting Wednesday. There were reports of people in Singapore rushing to stock up on food, as Malaysia is a source of many staple items. Singapore’s government said there would be no food shortages.

04:14 Facebook said it would send home all contract workers who review content until further notice. The company said this could impact response times and there may be more mistakes. The contract staff will continue to be paid.

Content reviewing cannot be be done at home due to “due to safety, privacy and legal reasons.”

03:35 Here’s a round-up of recent measures set to be implemented by European countries to stem the spread of coronavirus (SARS CoV 2):

In Germany, residents will wake up to bans on religious gatherings and ceremonies with closures of playgrounds and non-essential stores. Local and regional train services will be reduced. The country closed its borders Monday to France, Austria, Luxembourg, Denmark and Switzerland.

The French government put its citizens on partial lockdown — from Tuesday at noon people will only be able to leave their homes for grocery shopping, work or to take a walk. The measures will remain in place for 15 days.

In Finland, school and universities will be replaced with distance learning from Wednesday for four weeks. Kindergartens will stay open with advice that children should stay home where possible. Public gatherings will be limited to 10 people.

Switzerland ordered a state of emergency ordering shops, restaurants, bars, leisure and other facilities to shut down until April 19. The measures do not include healthcare operations as well as supermarkets.

The UK issued coronavirus guidelines, saying people should practice social distancing, but schools will not be closed for the moment.

Spain and Italy’s governments have already implemented similar lockdowns after the countries were hit hard by virus outbreaks. Currently there are 27,980 recorded cases of coronavirus in Italy and 9,942 in Spain.

03:00 The Philippines suspended trade on its local stock exchange, becoming the first country to do so over coronavirus fears.

02:20 Hundreds of prisoners escaped from four prisons in Brazil just a day before day-release privileges were set to be suspended, reported Sao Paulo state prison authorities.

The suspension of privileges was necessary because those returning to jail and “would have a high potential to install and propagate the coronavirus in a vulnerable population, generating health risks for servers and custodians” said authorities.

Law enforcement was dealing with the situation.

02:10 From midnight on Thursday all people entering Hong Kong will be quarantined for 14 days.

02:00 The UN security council has canceled all meetings that were due to go ahead this week.

01:52 Thieves took 50,000 protective face masks from a warehouse for hospital supplies in the German city of Cologne. “We’re talking about items that normally worth pennies, but there is obviously a market for them now,” said a spokeswoman for the city’s hospitals.

01:17 Venezuelan President Nicolas Maduro announced a nationwide quarantine. He also called on world leaders to “wake up to this pandemic and take drastic measures in time.” The number of cases in Venezuela has risen to 33.

01:00 Colombia will close all land, sea and river borders from midnight until the end of May. President Ivan Duque announced the measures on Twitter. Chile and Peru announced a total closure of their borders on Monday.

00:40 There could be up to 1,500 coronavirus patients hospitalized by the end of the week, said President of the German Hospital Society (DKG) Gerald Gass to German media outlet Funke Mediengruppe. Gass said that German hospitals are well prepared for such an increase in patients.

00:30 Ukraine became the latest European country to announce shutdowns of bars, restaurants and shopping malls. The measures to fight the virus came as President Volodymyr Zelensky promised to act “harshly and urgently.”

The government introduced restrictions on public transport, including closing the country’s three metro systems in Kiev, Kharkiv and Dnipro until April 3.