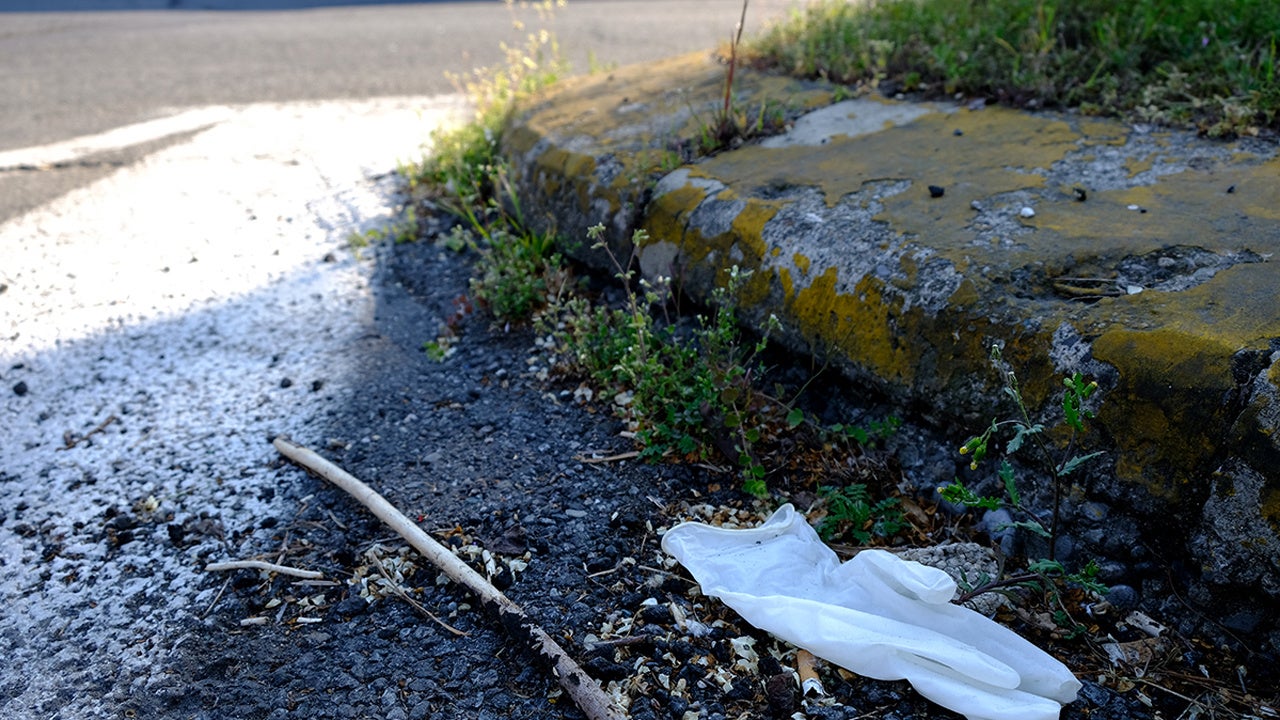 A used latex glove is seen abandoned as trash on a street floor on April 6 in Milan, Italy. Vincenzo Lombardo / Getty Images

Over a month into the lockdown and the usually bustling streets of Kalamata, a Greek city southwest of Athens traditionally known for its olives, are largely empty.

As in the rest of Greece, residents of the coastal city are allowed out only in strict circumstances, including for short exercise and grocery shopping. But discarded gloves, wipes and bottles of sanitizer are strewn across parks, sidewalks and roads, as people try to protect themselves and others from infection.

The problem isn’t confined to the small Greek city. Similar waste is causing problems in bigger metropolises such as New York and London.

And it has even hit the uninhabited Soko Islands. A few nautical miles from Hong Kong, Gary Stokes from the conservation group OceansAsia found some 100 masks washed up over the course of three visits to the beach.

“We hadn’t noticed this many masks before in such a remote location,” said Stokes, who suspects they came from nearby China or Hong Kong. “When we found them, it only had been six to eight weeks since people had started using these masks.”

Gloves, masks and other personal protective equipment (PPE) are critical for those fighting the pandemic but are also widely used by the public. Still, because they’re not always disposed of properly, environmentalists fear negative consequences for wildlife and the fight against plastic pollution.

“If they’re thrown on the streets, when it rains the gloves and masks will eventually end up in the sea,” said Anastasia Miliou, a marine biologist and research director with the Archipelagos Institute of Marine Conservation based in Greece.

And because waste management problems are systemic in Greece, even gloves and face masks that are put in the trash could ultimately end up in nature.

Even in Hong Kong, where littering is rare, Stokes said there are dozens of other ways masks can reach the sea.

“People are walking, they pull their wallets out and from their pockets a mask accidentally falls,” he explained, adding that even if they are put in the garbage, they are light enough to blow away.

And once they get into the water, they pose a threat to marine life.

“[In Hong Kong waters,] we’ve got pink dolphins and green turtles coming through this place,” said Stokes. “A recently published study showed that when plastic is left in the water long enough and algae and bacteria grow on it, it actually smells like food to turtles.”

How to properly recycle masks? It’s a problem

PPE items not left to float about in the environment and the sea are not necessarily easy to deal with either, explained Joan Marc Simon, executive director of Zero Waste Europe, a Brussels-based NGO.

He points to the European recycling scheme under which retailers and producers pay for the collection and treatment of plastic packaging. As gloves aren’t considered packaging, they cannot be put into household recycling bins, explained Simon.

Even gloves made of latex rubber, a natural product, aren’t always an eco-friendly choice, Simon added. It depends on the chemical additives used to produce them, he said, some of which can harm the environment when they decompose.

While it’s understandable that sustainability practices backtrack in a crisis, said Richard Thompson, professor and director of the Marine Institute at the University of Plymouth, tackling the plastic waste crisis means not losing sight of the whole life cycle of a product — from design until end of life.

“This should be the same thing whether it’s a bottle of lemonade or a mask that’s used in a hospital,” said Thompson. “Of course, it doesn’t help that we’re in this time of crisis, particularly when everybody is wanting a mask.”

Still, the EU Commission spokesperson for environmental matters, Vivian Loonela, recently told media outlet EurActiv it’s too early to assess the impact of the coronavirus on the overall amount of plastic packaging waste generated in 2020.

What are the sustainable choices in this pandemic?

The World Health Organization (WHO) told DW that regular hand-washing offers more protection against catching COVID-19 than wearing rubber gloves while out in public areas, while the US Centers for Disease Control and Prevention says that for the public, washable cloth masks will offer the necessary protection.

And while PPE used in medical facilities is largely non-recyclable or non-reusable, sustainable innovations are emerging.

In the U.S., the car manufacturer Ford is producing reusable gowns from air bag materials that can be washed up to 50 times, while the University of Nebraska is also testing to see whether ultraviolet light will decontaminate and prolong the life of medical masks, and therefore, reduce waste.

Simon from Zero Waste Europe believes countries shouldn’t have to choose between protecting the environment and protecting public health.

“That’s currently what’s happening,” said Simon. “In the future we need to make sure we’re ready for pandemics like this and that we’re ready to deal with them in an environmental way; it doesn’t have to be one at the expense of the other.”