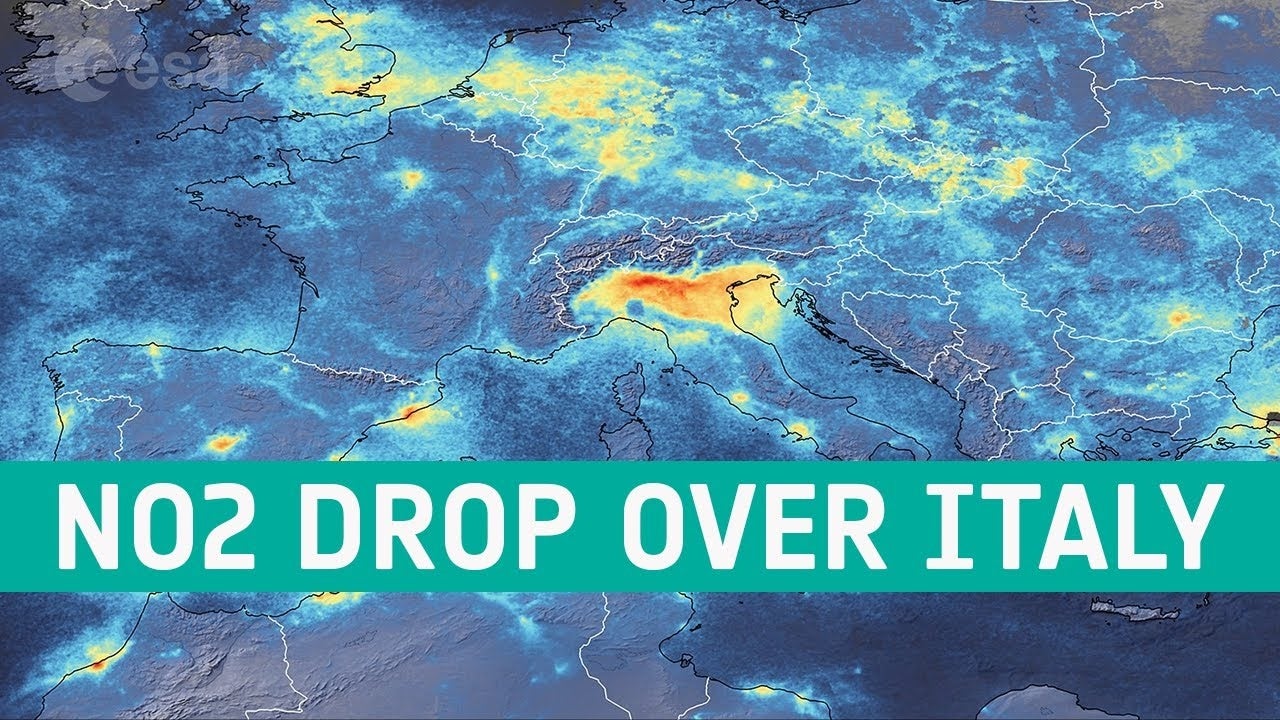 As the coronavirus spreads, so do startling satellite images showing a dramatic decrease in air pollution over quarantined areas.

Satellite data shared in early March showed a steep decline in nitrogen dioxide levels over China between January and February as the epidemic’s epicenter of Wuhan went into lockdown. Now, images shared by the European Space Agency (ESA) suggest that a similar thing happened in Italy, which has reported the second highest number of cases after China.

“The decline in nitrogen dioxide emissions over the Po Valley in northern Italy is particularly evident,” ESA’s Copernicus Sentinel-5P mission manager Claus Zehner said. “Although there could be slight variations in the data due to cloud cover and changing weather, we are very confident that the reduction in emissions that we can see, coincides with the lockdown in Italy causing less traffic and industrial activity.”

The ESA published an animation Friday based on data from its Copernicus Sentinel-5p satellite that shows fluctuations in nitrogen dioxide pollution over Europe between Jan. 1 and March 11. The decline in emissions over Italy coincided with lockdown measures announced by Prime Minister Giuseppe Conte March 9 that prohibited public gatherings and non-essential travel. This followed a decision the day before to lockdown the country’s North, The New York Times reported. The North has been the region hardest hit by the virus and where the pollution decline has been most evident.

Nitrogen dioxide emissions are largely driven by cars, power plants and industry. While they are not a major contributor to the climate crisis, they do tend to correlate with greenhouse gas emissions, The Washington Post explained. Because Italy has made significant strides in reducing its emissions and powers itself mostly with natural gas and renewable energy, experts think the decline is down to a decrease in driving.

“I guess this is mostly diesel cars out of the road,” Georgia Tech University climate economics expert Emanuele Massetti told The Washington Post.

The decline in tourism has brought “back the lagoon waters of ancient times, those of the post-war period, when it was even still possible to bathe in the waters of the canals,” local newspaper La Nuova di Venezia e Mestre wrote.

But COVID-19 has taken a significant human toll on Italy. The country reported 368 new deaths from the virus on Sunday, Al Jazeera reported. More than 2,100 people have died in total, and the country had 27,980 cases as of Monday, The Hill reported.

“This is not the way to reduce emissions!” University of Tuscia professor Riccardo Valentini told The Washington Post.