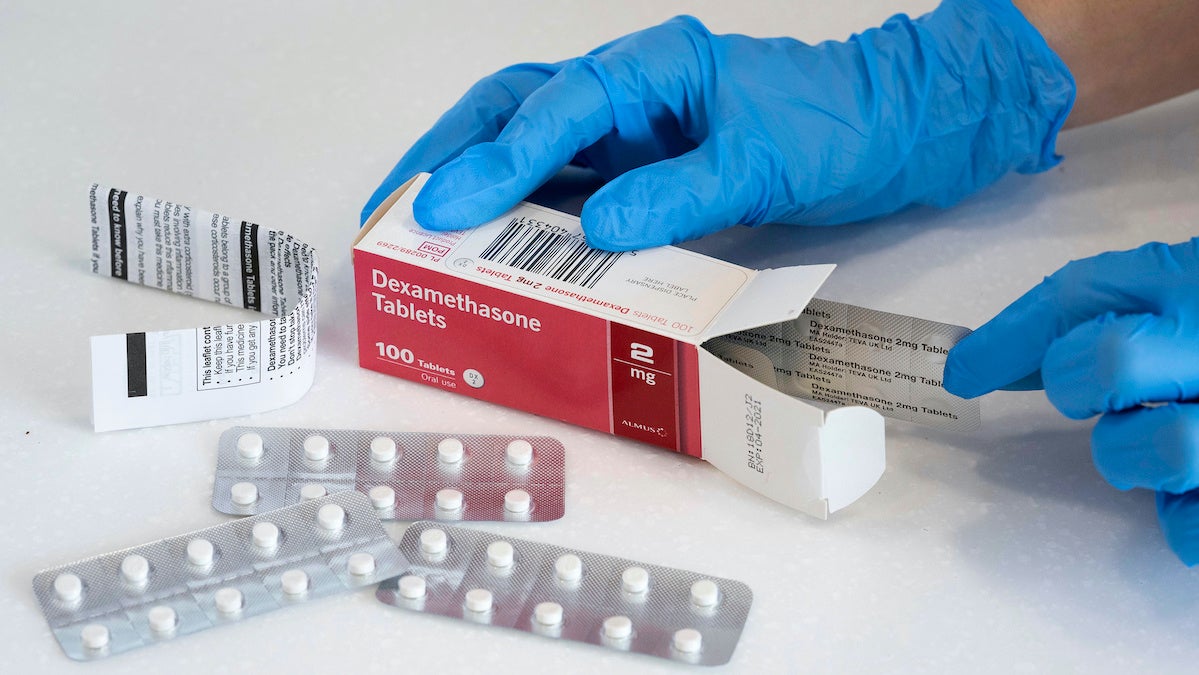 A box of dexamethasone tablets in a pharmacy on June 16, 2020 in Cardiff, United Kingdom. An Oxford researcher said that coronavirus patients should not buy the drug to take at home, but that hospitals should administer it when appropriate. Matthew Horwood / Getty Images

For the first time, scientists have found evidence that a drug can significantly help save the lives of people severely ill with COVID-19, and it’s a medicine that is both cheap and widely available.

Researchers at the University of Oxford found that the steroid dexamethasone reduced the risk of death by a third for patients on ventilators and a fifth for patients on oxygen, BBC News reported. If the drug had been used in the UK from the start of the coronavirus pandemic, the researchers said, as many as 5,000 lives could have been saved.

“This is the only drug so far that has been shown to reduce mortality — and it reduces it significantly,” chief investigator professor Peter Horby told BBC News. “It’s a major breakthrough.”

The finding is part of a broader RECOVERY clinical trial that has been testing potential coronavirus treatments since March, funding body the National Institute for Health Research (NIHR) explained. In the case of dexamethasone, 2,104 patients were randomly assigned to take the steroid once a day for 10 days and their outcomes were compared with another randomly-assigned control group of 4,321 patients who received standard care. The researchers stopped the trial early because it was working so well, The New York Times reported.

The NIHR-supported RECOVERY trial has shown that dexamethasone, a steroid, significantly reduces the risk of dying from #COVID19 for seriously ill patients requiring respiratory intervention – a major breakthrough https://t.co/KITpXiUcMr#priorityCOVIDresearch pic.twitter.com/W1ifVSPqDM

The drug has been used for more than 50 years to treat inflammatory conditions like arthritis and asthma. In the case of coronavirus, it helps prevent tissue damage caused when the immune system overreacts to the virus in a potentially deadly phenomenon known as a cytokine storm.

“What this is effectively doing is tamping down inflammatory responses in patients,” Stuart Neil, a professor of virology at King’s College London, told The New York Times. “It’s almost certain this is affecting the body’s response against the virus, rather than inhibiting the virus itself.”

The steroid did not help patients who did not require oxygen and was not tested on people managing their coronavirus symptoms at home, NIHR pointed out.

Lead researcher professor Martin Landray told BBC News that patients should not buy the drug to take at home, but that hospitals should administer it when appropriate. Indeed, doctors in the UK have been authorized to do so starting Tuesday, according to The New York Times.

“The treatment is up to 10 days of dexamethasone and it costs about £5 per patient,” Landray told BBC News. “So essentially it costs £35 to save a life.”

But the findings have not yet been peer reviewed, leading to skepticism on the part of some U.S. doctors, Reuters reported. In the race to find a cure for the new disease, treatments have been touted then abandoned and studies have been published and then retracted, The New York Times pointed out. On Monday, the U.S. Food and Drug Administration withdrew its emergency authorization for the use of anti-malaria drugs hydroxychloroquine and chloroquine against the coronavirus. And respected journal The Lancet retracted a coronavirus study this month because of data problems.

“It will be great news if dexamethasone, a cheap steroid, really does cut deaths by 1/3 in ventilated patients with COVID19, but after all the retractions and walk backs, it is unacceptable to tout study results by press release without releasing the paper,” writer and surgeon Atul Gawande tweeted.

It will be great news if dexamethasone, a cheap steroid, really does cut deaths by 1/3 in ventilated patients with COVID19, but after all the retractions and walk backs, it is unacceptable to tout study results by press release without releasing the paper. https://t.co/ZP5GVMUCW3

South Korea’s top health official urged caution in prescribing dexamethasone because of potential side effects, and several U.S. doctors said they would wait for a peer-reviewed article to make their final judgment, according to Reuters.

“We have been burned before, not just during the coronavirus pandemic but even pre-COVID, with exciting results that when we have access to the data are not as convincing,” Dr. Kathryn Hibbert, who directs the medical intensive care unit at Harvard’s Massachusetts General Hospital, told Reuters.