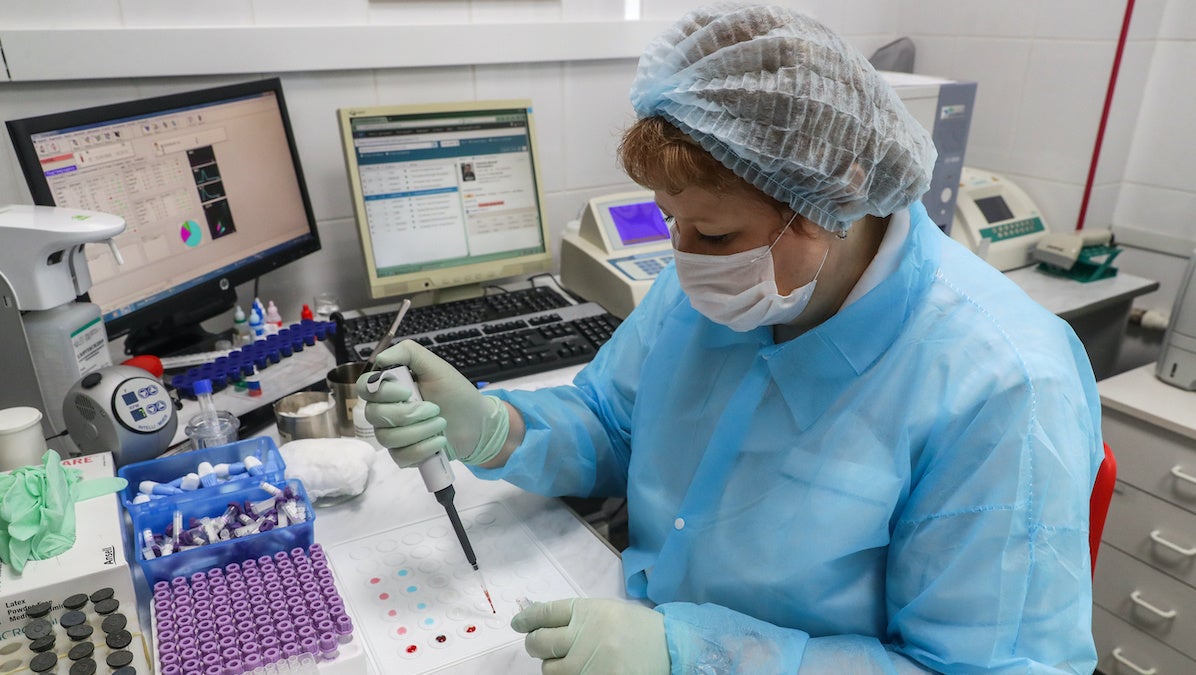 A healthcare worker carries out a blood type test at Novosibirsk Blood Centre in Novosibirsk, Russia on May 22, 2020. Kirill Kukhmar / TASS via Getty Images

As coronavirus cases continue to climb as the world reopens, many scientists are hunting for clues to explain why some infected people get very sick while others experience only mild or no symptoms at all.

Three separate studies suggest that increased risk of contracting the coronavirus and of developing more serious COVID-19 symptoms is tied to blood type. Researchers in all three studies found Type O blood to be more “protective” against COVID-19 susceptibility and severity.

There are four main blood types — A, B, AB and O, explained the Red Cross, and proteins on the surface of your red blood cells determine which type you are.

In a study published Wednesday in the New England Journal of Medicine, genetic analysis of thousands of COVID-19 patients in Europe suggested a link between blood type and coronavirus risk. The researchers studied more than 1,900 severely ill coronavirus patients in Italy and Spain, comparing them to 2,300 people who were not sick or who only experienced mild symptoms, reported CNN.

Dr. Robert Glatter, a New York City emergency medicine physician at Lenox Hill Hospital, explained how the genes that control blood type also play a role in the makeup of the surface of cells. He said that changes in cell-surface structure due to blood type could influence the vulnerability of the cell to be infected by the new coronavirus, reported Medical Xpress.

Type O blood cells are better able to recognize certain proteins as foreign and dangerous, and that may extend to proteins on virus surfaces, Dr. Parameswaran Hari, a blood specialist at the Medical College of Wisconsin, told KRON4.

Still, the researchers cannot say if blood type is a direct cause of the differences in susceptibility, noting that the genetic changes that affect someone’s risk could also just happen to be linked with blood type, reported CNN.

The study doesn’t prove the linkage but confirms a prior report from China of the blood type/disease severity connection, KRON4 reported. Hari said that the findings from China, which were the “first observation of an association” between blood type and COVID-19 susceptibility, were “crude” and limited because they studied only 2,173 patients but that the new European study seems to validate those findings. With the new work, “Now I believe it,” he said. “It could be very important,” reported KRON4.

“Our preliminary data shows that O is protective not just for susceptibility but also how severe the disease is,” Dr. Anjali Shastri, a researcher with 23andMe, told NBC Miami.

Shastri also told NBC Miami that Type O blood remains “protective” even when controlling for race, sex and age, factors that have previously been linked to coronavirus vulnerability.

Scientists in all the studies cautioned that the findings were still preliminary and urged other scientists to see if they find the same links with additional patient verifications, reported KRON4.

Blood type has been tied to susceptibility and severity in other infectious diseases, including, most notably, SARS, a genetic cousin of the coronavirus. During the SARS outbreak, Type O blood also reduced the severity of symptoms, Hari told KRON4. Blood type also affects the severity of cholera, recurrent urinary tract infections from E. coli, and a bug called H. pylori that can cause ulcers and stomach cancer, reported KRON4.

Researchers hope the findings will prove useful for designing drugs or vaccines against coronavirus, reported CNN.