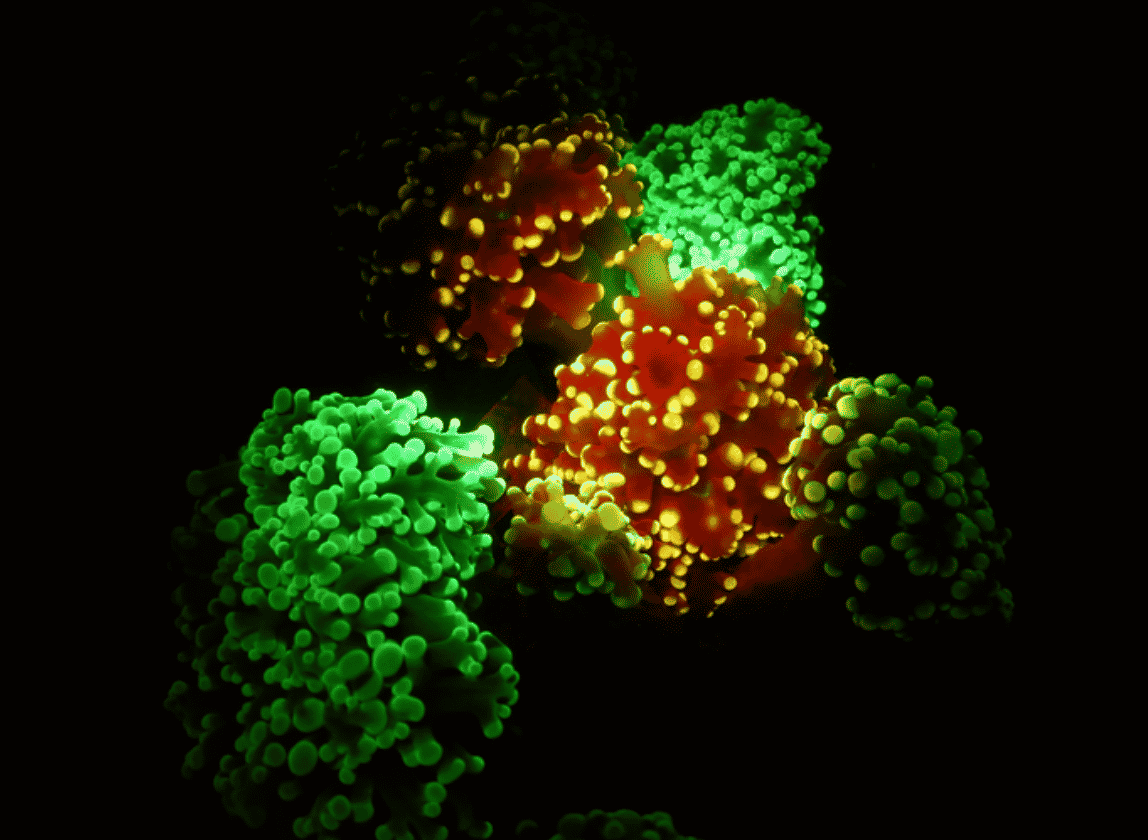 If you were to dive 148 feet below the ocean’s surface – into the twilight mesophotic zone – you would see corals glowing green or orange around their mouths or on the ends of their tentacles.

Scientists have long known that corals glow fluorescent in the deep, but, until recently, they didn’t know why. Now, a new study published in Communications Biology last month has an answer: to attract prey.

“The study proves that the glowing and colorful appearance of corals can act as a lure to attract swimming plankton to ground-dwelling predators, such as corals, and especially in habitats where corals require other energy sources in addition or as a substitute for photosynthesis (sugar production by symbiotic algae inside the coral tissue using light energy),” study co-author and research supervisor  Professor Yossi Loya from the School of Zoology and the Steinhardt Museum of Natural History at Tel Aviv University said in a press release.

Biofluorescence is the ability of living organisms to give off light after absorbing energy in some way, The Times of Israel explained. It differs from bioluminescence, which is a glow created by a reaction between an enzyme like luciferase and a molecule that releases light. However, the two properties can have similar purposes such as attracting prey or mates or camouflaging from predators.

Fluorescence in corals is well documented, but mysterious. Scientists have developed various hypotheses to explain the phenomenon, according to ScienceAlert. These include the “sunscreen” hypothesis that the fluorescence helps protect corals from heat or light after bleaching and the suggestion that the fluorescence aids photosynthesis. But when researchers tested these hypotheses on the corals that live between 98 and 492 feet below sea level, they found no evidence to support either.

“[C]oral fluorescence in deeper habitats creates a gap in our understanding of the widespread phenomenon,” the study authors wrote.

The University of Tel Aviv-led research team, with help from the Steinhardt museum of Natural history and the Interuniversity Institute for Marine Sciences in Eilat, suspected that the corals might be using their glowing abilities to lure prey, as the press release explained. To test this, they conducted the study in three steps.

First, they tested in the lab whether common coral prey were attracted to fluorescence. They used the crustacean Artemia salina and found that it preferred a green or orange fluorescent target to a clear target. When presented with two clear targets, the animal showed no preference. The results were the same with a different Red Sea crustacean, but fish–which are not known coral prey–stayed away from the fluorescent targets.

Next, the researchers tested the plankton at a depth of around 40 meters (approximately 131 feet), which is the corals’ natural habitat. In this environment, the creatures were also more attracted to green or orange fluorescent traps, which caught twice as many of them as the clear traps.

“Despite the gaps in the existing knowledge regarding the visual perception of fluorescence signals by plankton, the current study presents experimental evidence for the prey-luring role of fluorescence in corals,” study leader Dr. Or Ben-Zvi of Tel Aviv University said in the press release. “We suggest that this hypothesis, which we term the ‘light trap hypothesis’, may also apply to other fluorescent organisms in the sea, and that this phenomenon may play a greater role in marine ecosystems than previously thought.”

The research findings come as corals–including deep reef corals–are under a myriad of threats. Deep corals in particular are vulnerable to bottom-trawl fishing, offshore oil and gas production, the possibility of deep sea mining and the climate crisis, as Sandra Brooke of Florida State University wrote in The Conversation.

“Ocean currents circulate around the planet, transporting warm surface waters into the deep sea. Warming temperatures could drive corals deeper, but deep waters are naturally higher in carbon dioxide than surface waters. As their waters become more acidified, deep-sea corals will be restricted to an increasingly narrow band of optimal conditions,” Brooke wrote.