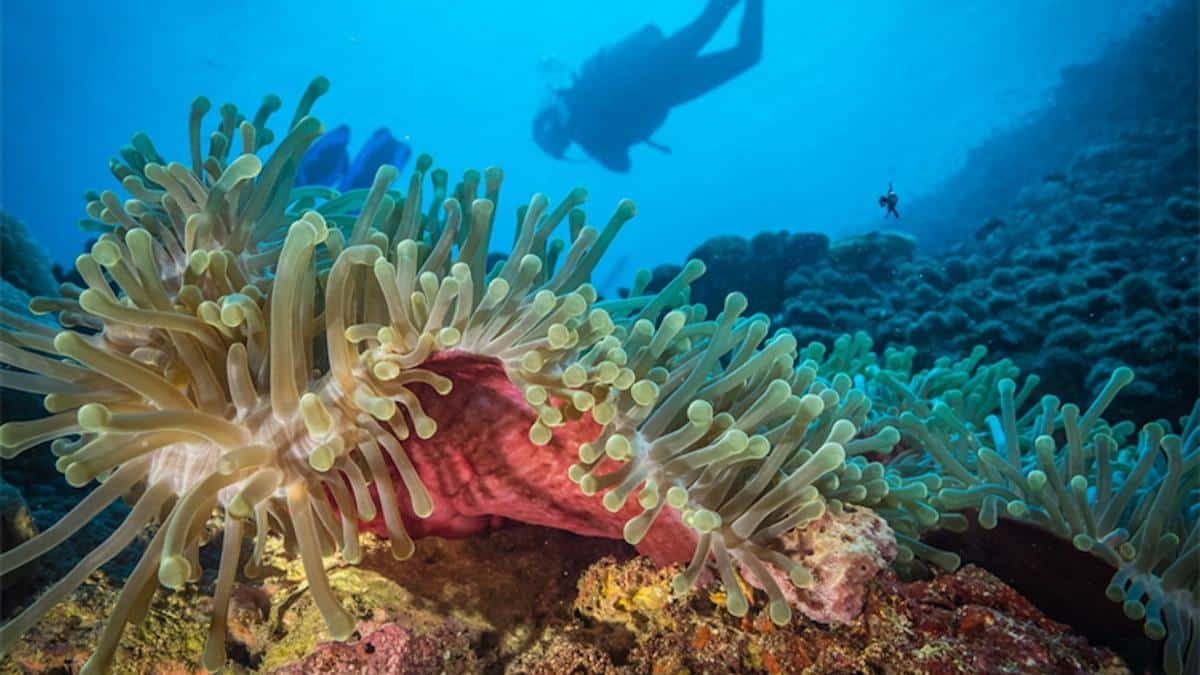 A coral reef off the coast of Tanzania, where deep, cool water protects it from warming temperatures. Michael Markovina / WCS

Thousands of years ago, glacial runoff from Mount Kilimanjaro formed a deep basin off the coast of East Africa. Today, this oasis of deep, cool water provides coral reefs and marine life with a sanctuary from the rising temperatures of the climate crisis, allowing biodiversity to thrive.

This unique refuge was discovered recently by scientists with the Wildlife Conservation Society (WCS) and described in Advances in Marine Biology.

“This area off the coast of Tanzania and Kenya is a small but vibrant basin of marine biodiversity,” study author and lead WCS coral scientist Dr. Tim McClanahan said in a press release. “Our study shows that while warming waters may devastate surrounding reefs, this area could become an incredibly important sanctuary where marine species big and small will flock to find refuge from climate change. If well protected, this key transboundary marine ecosystem will remain a jewel of biodiversity for the entire East African coast.”

The newly discovered refuge is teaming with marine life. Spinner dolphins swim there, and the coast has the highest density of dolphins in East Africa, The Guardian reported. Rare dugongs have been spotted there, and the deeper reaches are home to coelacanths, a prehistoric fish once believed to be extinct.

McClanahan did not immediately understand why so much life was drawn to this spot, which stretches from Shimoni, Kenya, which is 50 miles south of Mombasa, to Dar es Salaam in Tanzania.

“I thought ‘why are all the animals here?’ And I realised it was because of Kilimanjaro,” he told The Guardian.

The sea surface temperatures of the tropical Indian Ocean have risen about one degree Celsius on average between 1950 and 2015, according to an Assessment of Climate Change over the Indian Region. In addition, the ocean has been subjected to greater and more frequent marine heatwaves, WCS explained. In this context, the cooler waters off of Kenya and Tanzania could provide an increasingly vital habitat for threatened species like sharks and rays.

To test whether this was indeed the case, McClanahan installed temperature gauges along the coast that he could then monitor by satellite, according to The Guardian. Once a warming event occurred and the temperatures began to rise, he entered the water to observe how the corals were impacted, and found that they were indeed preserved.

“Outside that area, the corals are bleached and dying. But inside the area, of around 400 sq km [150 sq miles] they retain their colour and their health. They are reds and brown. My research partner likes to call them: ‘happy corals’,” McClanahan told The Guardian.

He explained to InsideClimate News exactly how this works.

“It would be like running hot water into a cold bathtub; if the bath is cold, it would take a long time to warm up,” he said. “By the time these hot water events pass, they haven’t really raised the temperature of the water all that much. So you maintain these coral sanctuaries where the water is cool.”

However, the area’s role as a coral sanctuary will depend on its being protected from other threats. Coastal development, including a new port planned in northern Tanzania to serve a new oil pipeline, is one, WCS said. Another is unsustainable fishing practices like dynamite fishing, McClanahan told InsideClimate News. This is when fisherpeople drop a stick of dynamite into the water to kill massive amounts of fish in one go. Unsurprisingly, this also destroys coral.

“Some of the reefs that I’ve been studying suggest they can’t recover for many, many years after the dynamite fishing,” McClanahan told InsideClimate News.