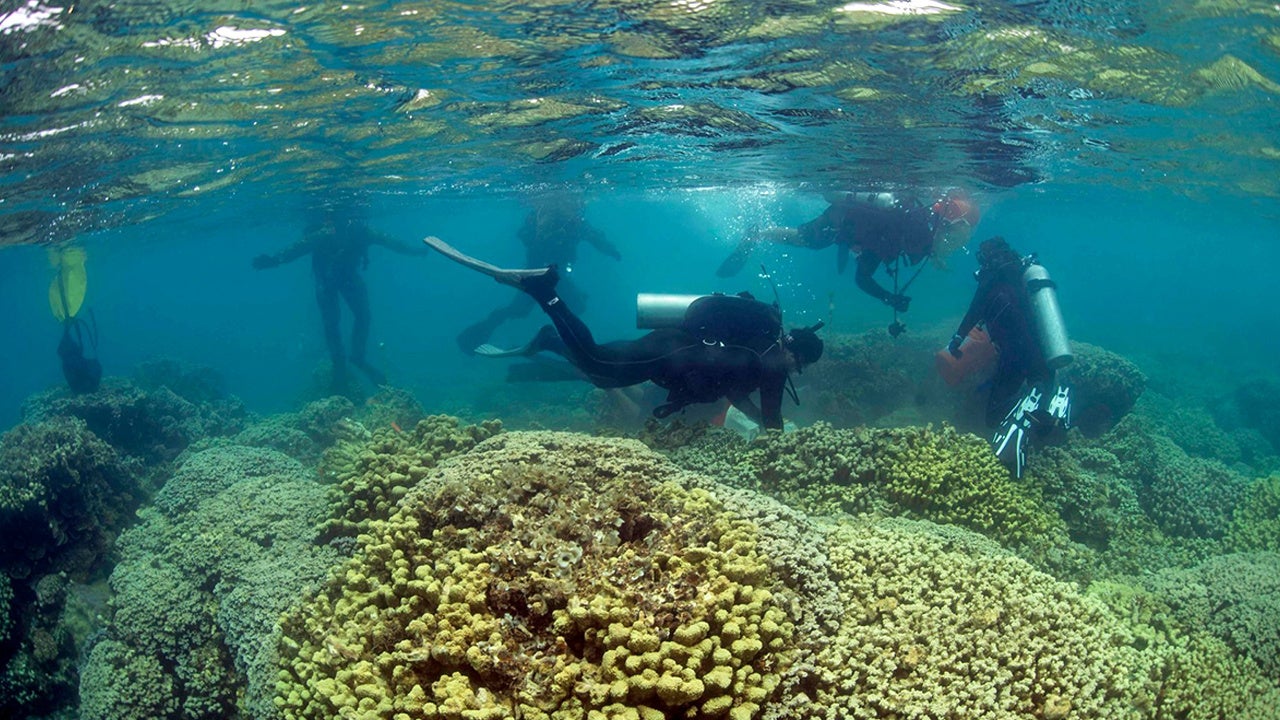 Visit a coral reef off the coast of Miami or the Maldives and you may see fields of bleached white instead of a burst of colors.

Coral reefs are in a death spiral. Many of the world’s major reefs — which give the oceans life, support fisheries, prevent storm damage, provide medicine and create ocean-based tourism opportunities — are expected to disappear by 2100. Experts say coral decline has numerous causes, including chemical runoff, plastic pollution, disease and overfishing.

But the main culprit is climate change, a crisis with no quick fixes.

As the late Ruth Gates — one of the world’s foremost coral experts and former director of the Hawaii Institute for Marine Biology — told me two years ago, shortly before her death: “A significant cut in greenhouse gas emissions is required to save corals … not to mention, us. Such an endeavor will require government and public cooperation, and it will take time.”

Coral reefs don’t have much time, so experts around the world have used whatever tactics were in their reach to try to give corals a fighting chance. Much of their focus has been on top-down, policy-driven approaches like creating marine protected areas, banning toxic sunscreens, and cracking down on the illegal capture of reef fish.

But a growing number of experts, building on efforts by Gates and others, have taken a more bottom-up approach: coral reef restoration, or the process of repopulating deteriorating reefs with healthy coral. And they’re tapping citizen scientists to help with the effort — people participating in scientific projects organized by experts.

There’s evidence that this type of restoration could solidly support the full range of reef-conservation efforts underway. But given the extent of the crisis and what’s at stake, is repeatedly putting new crops of corals into harm’s way the answer? 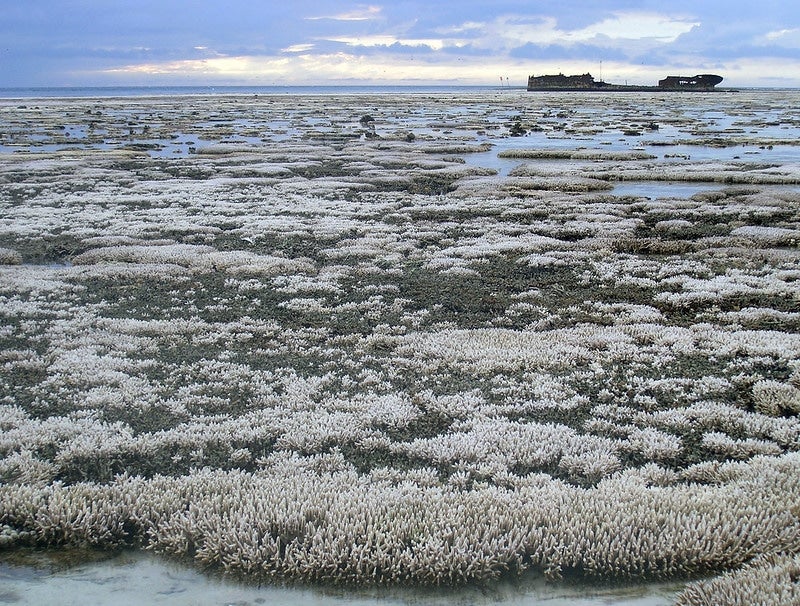 A major coral bleaching event on part of the Great Barrier Reef in Australia.

Though reefs cover less than 1 percent of Earth’s surface, they support more than a million different species, including many types of algae — like sea grasses and sea lettuces — and a broad range of animals from starfish to shrimp to sharks, as well as people. Experts estimate that corals pull 5 billion into the global economy every year, mainly by fostering tourism, supporting fisheries, and contributing to medicine and storm protection.

Despite their value corals have been in decline for decades. Scientists responded by initiating the first reef-restoration efforts about 50 years ago. Since then restoration efforts have been tailored to meet the needs of corals prioritized at specific times and places. In the 1970s, as coastal development boomed, scientists focused on expanding corals’ habitat by strategically placing shipwrecks, concrete pipes, tires and other manmade structures underwater on which corals could grow. By the early 2000s, scientists had become more interested in addressing other localized risks to reefs — such as overfishing, irresponsible tourism and invasive species.

But climate change poses an even more far-reaching threat.

Bleaching — a precursor to coral death caused by stressors including warming waters — has left nary a reef unscathed around the world. Most corals thrive in temperatures between 73-84 degrees Fahrenheit. Oceans naturally undergo seasonal warming, which leads to temperature fluctuations high enough to bleach some corals. In the past corals could recover from bleaching events once waters cooled. Scientists say it takes 15 to 25 years for a reef to recover from serious bleaching and become healthy enough to support a rich host of marine life. But today, with the relentless and extreme warming our oceans now face, corals are running out of possible recovery time. It’s becoming much harder for them to make a comeback.

Not only does climate change raise the temperature of the oceans, resulting in inhospitable conditions for corals, it deposits excess carbon dioxide into the water — increasing seawater’s acidity. More acidic waters can erode hard corals’ skeletons and make it more difficult for corals to grow. The cumulative effects have been seen around the planet. According to the National Oceanic and Atmospheric Administration, more than 27 percent of the world’s coral population has died over the past three decades.

According to UNESCO, bleaching on coral reefs across the world was first documented in 1983, but since then its frequency and severity has quickly accelerated. In a 2017 report, the organization identified the cause of bleaching on 72% of its so-called “globally significant” reefs from 2014 to 2017 as record-breaking ocean temperatures.

“During bleaching, the usual reef hues of browns, purples and greens are replaced by a white ghost town,” said Andersen, a resident marine biologist at Ocean Group Maldives who is part of an upstarting coral reef replanting project based at InterContinental Resort, a hotel on Raa Atoll. “Soft corals appear as white blobs that melt off rocks and hard corals turn into fragile skeletons. The only way I can describe it is heartbreaking.” 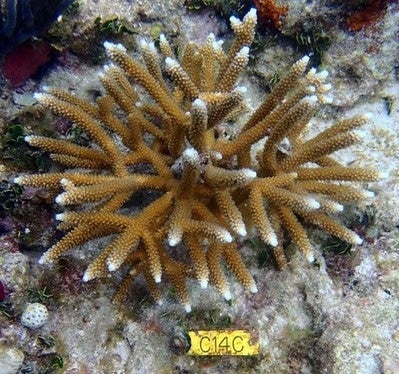 A healthy staghorn coral colony two years after it was planted on a reef in the Florida Keys.

To stem this tide, restoration efforts now mostly involve growing corals in undersea nurseries and transplanting them onto dying reefs that are losing coral. Like saplings being replanted in a fallen forest, young corals can help regenerate an ecosystem that’s becoming barren.

But the work can be expensive and labor-intensive. According to researchers it can cost more than 0,000 to restore one reef — a small fortune in low-income coastal communities that may struggle to find funding.

That’s why restoration efforts have grown increasingly reliant on the help of citizen scientists. This has significantly reduced the high price tag of restoration by replacing paid labor with volunteers — without any noticeable decline in success. Research shows the growth and survival rate of the corals planted by citizen scientists is almost identical to corals planted by experts. When handled properly, the corals replanted by volunteers survive at a rate of at least 80 percent, and often exceeds 90 percent, said Dalton Hesley, a senior research associate at the University of Miami Benthic Ecology and Coral Restoration Lab, who led that study.

“Replanting is an investment,” Hesley said. “These corals should, in theory, live indefinitely, and you should expect to see growth over the years.”

But that’s only if we also take necessary action to prevent further degradation of, and ultimately remediate, the oceans, he said. Unless the world addresses climate change, runoff, pollution and development, reefs will continue to decline and risk being lost forever.

At this moment in Earth’s history, “I don’t think it should be a matter of choosing one over the other,” said Andersen. Both large-scale efforts to address the climate crisis and labor-intensive replanting efforts are necessary to give reefs a chance of surviving Earth’s current extinction crisis. “We have to meet somewhere in the middle, finding renewable resources while also restoring reefs. We can’t just sit around and wait, leaving corals in limbo.” 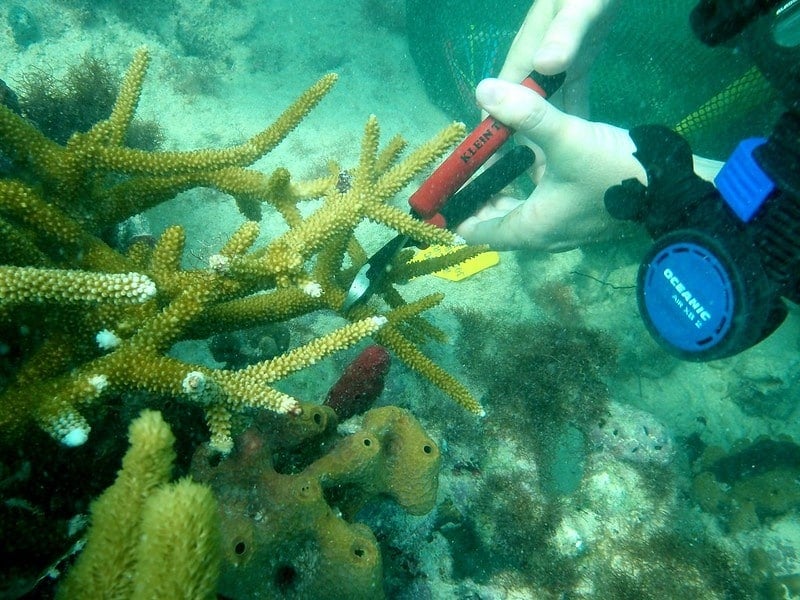 “On first glance replanting may seem like a distraction from mitigating climate change, which is what we have to do if we want to save reefs,” said Andersen. But she says restoration can give corals a better chance — especially when they’re coupled with recent efforts to supercharge replanting by genetically identifying the most diverse and resilient species.

A well-planned, diverse reef is probably the best remedy to bleaching, Andersen said.

“I’ve heard of hundreds of restoration projects around the world, but none that have failed,” she said. “But if one happened to fail, I would assume its leaders failed to create enough coral diversity.”

Thousands of species of hard and soft corals have been identified to date, and each of these species has varying levels of resistance to stressors. Even within a species, scientists have identified different gene patterns that can convey different benefits.

“Some corals grow very quickly, some are less prone to disease, some bleach less, some are hardier during storms, for example,” Hesley said. “There’s not one coral species or individual that excels across the board, so we must focus on creating high levels of coral diversity.”

Larger-scale reef restoration projects, like the program Hesley is involved in at the University of Miami, keep track of coral genetics using DNA analysis, ensuring coral diversity. Smaller-scale programs in rather remote places, like Andersen’s project in the Maldives, often do not have in-house access to labs and genetics testing, which can be prohibitively expensive.

Andersen said these challenges require her to go through a complex research process and collaboration with coral geneticists on a different atoll to pinpoint the most and least resilient coral species. Then, she must carefully remove fragments of coral from reefs known to have survived past bleaching events so that they can be used to spawn more hardy corals. After that, she monitors the donor reef and fragments to ensure they stay healthy. These preliminary parts of the replanting process, which require permits and extraordinary precision, are left up to the professionals.

When it comes to giving dying corals another shot, Hesley acknowledged that coral reef restoration is not a perfect solution. He said finding adequate funding, staff and volunteer labor, and addressing the root causes of reef decline — climate change and local stressors to reef health — are lingering challenges.

However, Anderson said the benefits of reef restoration, especially those powered by citizen scientists, are strong compared to their drawbacks. This has led to projects cropping up on reefs all around the world, developed by scientists hired by research institutions and hotels alike.

One of the most exciting she’s seen is a citizen-science restoration project led by Peter Harrison of Southern Cross University in Australia, who has developed a backpack-sized inflatable coral spawn catcher and nursery pool in which baby corals can grow until they’re big enough to be replanted.

Of course, even volunteers can only do so much. Harrison has also pioneered use of robots to swiftly distribute baby corals onto nearly 7.5 acres of damaged reefs, doing a job in just six hours that would take several human hands at least a week. If perfected, it could put volunteer seeding efforts effectively out of business.

But there’s always a role for people willing to help. After corals are propagated, whether it’s by hand or machine, citizen scientists can help care for them in undersea nurseries.

All of this requires careful planning. Andersen emphasizes the importance of establishing clearly defined goals for restoration, based around a community’s needs and available resources. Another aspect of a successful restoration effort, she said, is an effective and accessible training program that primes citizen scientists on how to participate and, ultimately, care about the future of corals.

And that ties into the fundamental reason why citizen science still matters: because restoration buys time for corals. Experts at the Smithsonian Research Institute have found that the more living coral a reef has when exposed to highly acidic waters, the more likely it is to survive, instead of bleaching and dying.

Meanwhile, the efforts help to connect people to something that otherwise might stay out of sight and out of mind beneath the surface of the ocean.

“I don’t think a lot of people who get involved in restoration initially have that emotional attachment to coral reefs simply because they haven’t had a chance to care about them,” Andersen said. “Restoration gives them the opportunity to make a connection, to really understand how dire the situation is, and to do something that can help.”