The back-to-back coral bleaching events that damaged two-thirds of Australia’s Great Barrier Reef in 2016 and 2017 have had a lasting impact on the health of the largest living structure on earth.

A study published in Nature Wednesday found that the death of corals in 2016 and 2017 has significantly decreased the ability of new corals to grow and thrive. In 2018, there has been an 89 percent decline in the number of new corals on the reef compared to the historic record.

The researchers, from the ARC Center of Excellence for Coral Reef Studies in Australia, were surprised by the extent of the decline in new corals. It was the first time they had observed such a decline on the reef.

“We thought the Barrier Reef was too big to fail,” ARC chief investigator Andrew Baird told The New York Times, “but it’s not.”

Baird added that the study was the first to document the collapse of the processes of an ocean ecosystem.

Bleaching occurs when warm water forces corals to expel the algae that gives them color and nutrients. Reefs can recover from such events, but it takes about a decade. The Great Barrier Reef has suffered four since 1998 and, if greenhouse gas emissions continue at current levels, there could be two bleaching events every decade beginning in 2035.

The extent of the most recent bleaching events — covering 900 miles of reef — also made it harder for baby corals to replenish impacted coral populations, BBC News explained.

“Babies can travel over vast distances, and if one reef is knocked out, there are usually plenty of adults in another reef to provide juveniles,” Baird told BBC News. “Now, the scale of mortality is such that there’s nothing left to replenish the reef.”

The bleaching impacted some corals more than others. New Acropora corals decreased by 93 percent. These are table-shaped corals that are responsible for the three-dimensional structure of the reef and provide habitat for species like coral trout and clown fish.

“We’ve always anticipated that climate change would shift the mix of coral,” Hughes told National Geographic. “What’s surprised us is how quickly that is now happening. It’s not happening in the future. It’s something that we’re now measuring.”

Another paper I hoped I would never have to write: Global warming impairs stock–recruitment dynamics of corals | Nature https://t.co/eNvVAq84tR

A 2018 study had provided some hope by finding that corals that survived the 2016 bleaching event were also better able to withstand the event in 2017. Researchers are trying to breed the more resilient corals, but National Oceanic and Atmospheric Administration’s Coral Reef Watch coordinator Mark Eakin, who was not involved in the study, told The New York Times that projects like this could not replenish the whole reef.

“Those are at the scale of a large family garden,” he said, while the threat to the Great Barrier Reef could cause “the loss of an entire seascape.”

“We’ve gotten to the point now where local solutions for the reef are almost pointless―the only thing that matters is action on climate change,” Baird told BBC News. 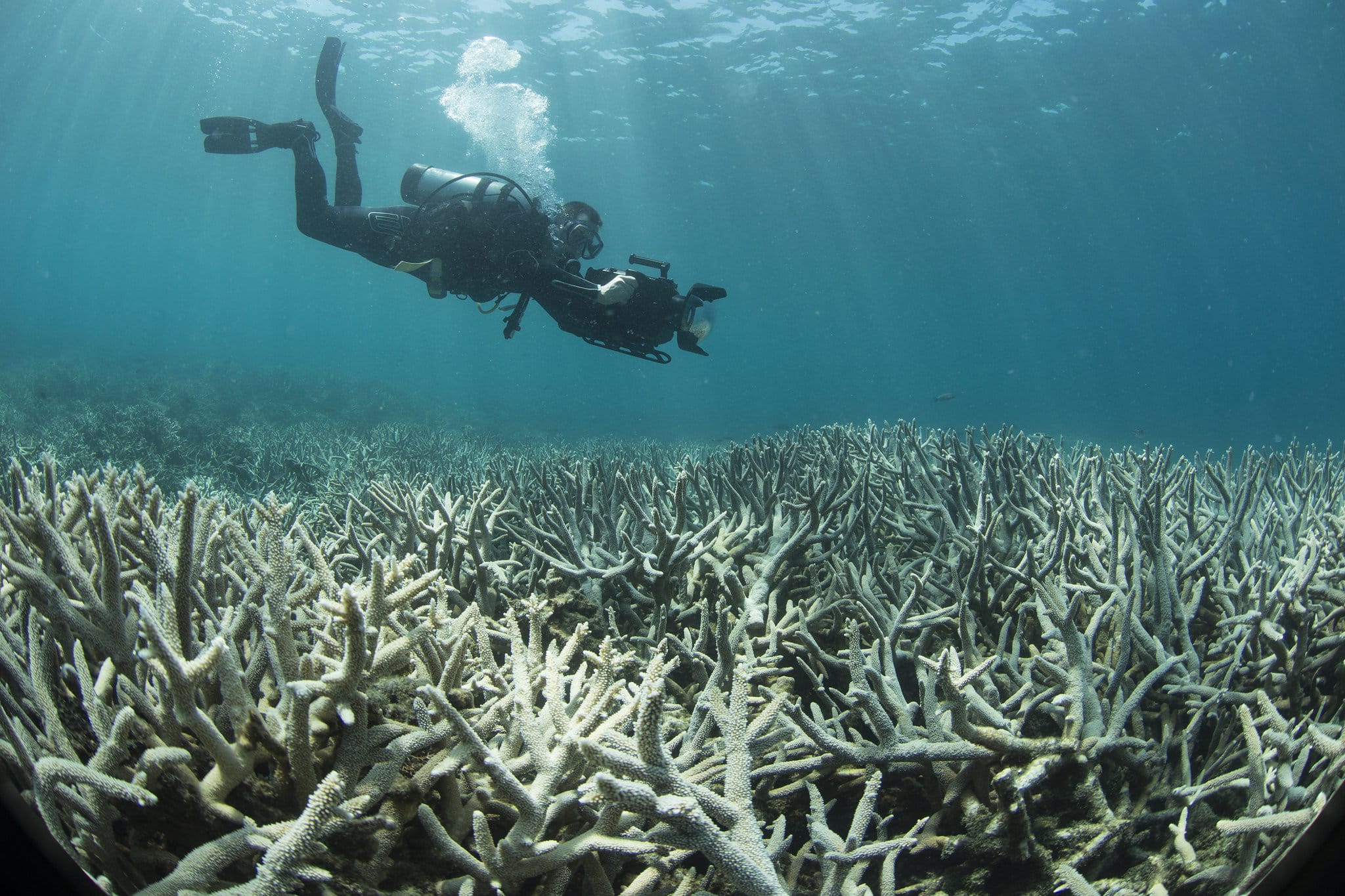 Coral bleaching at Heron Island on the Great Barrier Reef in January 2016.