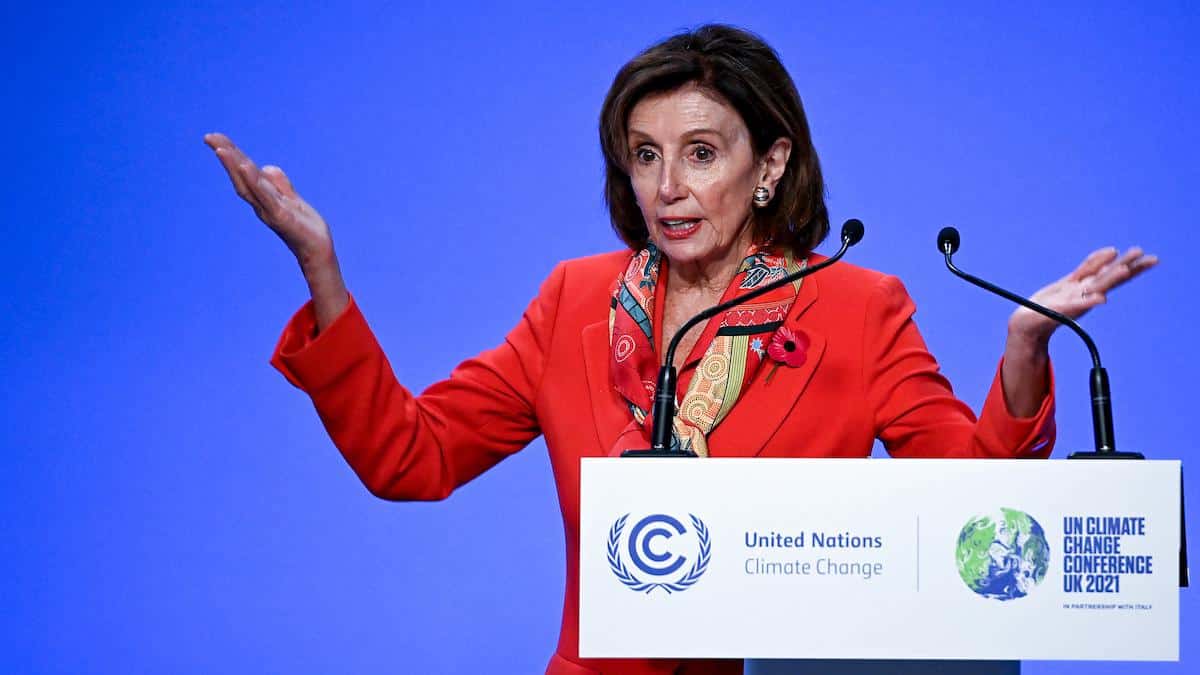 Glasgow, Scotland — It’s an article of faith in U.S. political and media circles that American leadership is essential to global climate progress.That message was repeated Tuesday at the United Nations climate conference COP26 as Speaker of the U.S. House of Representatives Nancy Pelosi and a delegation of 16 fellow congressional Democrats congratulated themselves and U.S. president Joe Biden for the “Build Back Better” climate legislation they are trying to pass in the United States Congress.

Never mind that the United States, under Democrats and Republicans alike, has arguably been the single biggest obstacle to global climate action since the 1992 Earth Summit that set in motion the negotiations whose latest installment is now unfolding in Glasgow. Former President Donald Trump’s withdrawal of the U.S. from the 2015 Paris agreement is only the most obvious recent example of that obstructionism. Indeed, the main reason the Paris Agreement, which was signed under President Barack Obama, is only an agreement rather than a treaty regarded as legally binding is that then–Secretary of State John Kerry and his international counterparts knew full well that the U.S. Senate would never ratify a treaty that committed countries to keeping global temperature rise “well below” 2 degrees Celsius. The United States was even more hostile to climate action during George W. Bush’s eight years in the White House. And in 1997, when the world’s governments approved the Kyoto Protocol, Bill Clinton’s administration did not bother submitting it to the Senate because, according to then–Vice President Al Gore, not even 10 senators were likely to approve it.

But American exceptionalism is a sturdy beast, as journalists in Glasgow witnessed Tuesday afternoon.

“Led by our delegation, the United States Congress is showing the world true climate leadership,” Pelosi boasted at a press conference that featured more speech-making than exchanges with reporters. When Pelosi introduced each member of Congress by name and urged them to applaud themselves, Representative Alexandria Ocasio-Cortez notably did not join the clapping. Pelosi went on to extoll the $250 billion that the Build Back Better budget bill allocates to “clean energy tax credits” and its $222 billion for “environmental justice.” She praised the bill’s $150 billion for “climate-smart agriculture and nature-based climate solutions.” She emphasized the hundreds of billions of dollars for family medical leave, universal pre-K, and other social welfare programs that will “enable everyone to participate in the economic prosperity that will flow from this” bill — because, she added, “this is all about the children, leaving them a world where they can be healthy and more secure.”

By the time the speaker had invited the chairs of the Foreign Affairs, Science and Technology, Natural Resources, and other committees to speak, and they had finished thanking Pelosi for her leadership and claiming that the Build Back Better Act would put the U.S. on track to limiting temperature rise to 1.5 degrees Celsius, there was time for only two questions from reporters.

The first asked whether Pelosi still intended the House to pass the Build Back Better Act the week of November 15. The speaker confirmed that she did. The second question was rather less predictable. After saying, “I want a woman,” a nod to a panel discussion earlier in the day about gender equality, Pelosi got a question from Abby Martin of The Empire Files.

“Speaker Pelosi, you just presided over a large increase in the Pentagon budget,” Martin said. Pointing out that the Pentagon budget “is already massive” and “the Pentagon is a larger polluter than 140 countries combined,” Martin asked Pelosi, “How can we possibly talk about net zero if there is this bipartisan consensus to constantly expand this large contributor to climate change?”

Veteran politicians are skilled at not answering questions they don’t want to answer. Pelosi invited John Pallone, chair of the Energy and Commerce Committee, to respond. He said the military knows that climate change is a national security issue, “so I don’t see…increasing the defense budget as being something that’s inconsistent with climate action.” Likewise avoiding the subject of the Pentagon’s bountiful budget, Pelosi added that reducing the military’s use of fossil fuels would help “stop” climate change, so “that is something we’re very focused on.”

And then it was time to conclude. The conference organizers, Pelosi explained, “are telling us it’s time to clean the room.”

Mark Hertsgaard is the co-founder and executive director of Covering Climate and the environment correspondent for The Nation.