‘The World Is at a Crossroads’: Urgent Climate Talks Begin in Poland as Negotiators Meet a Day Early 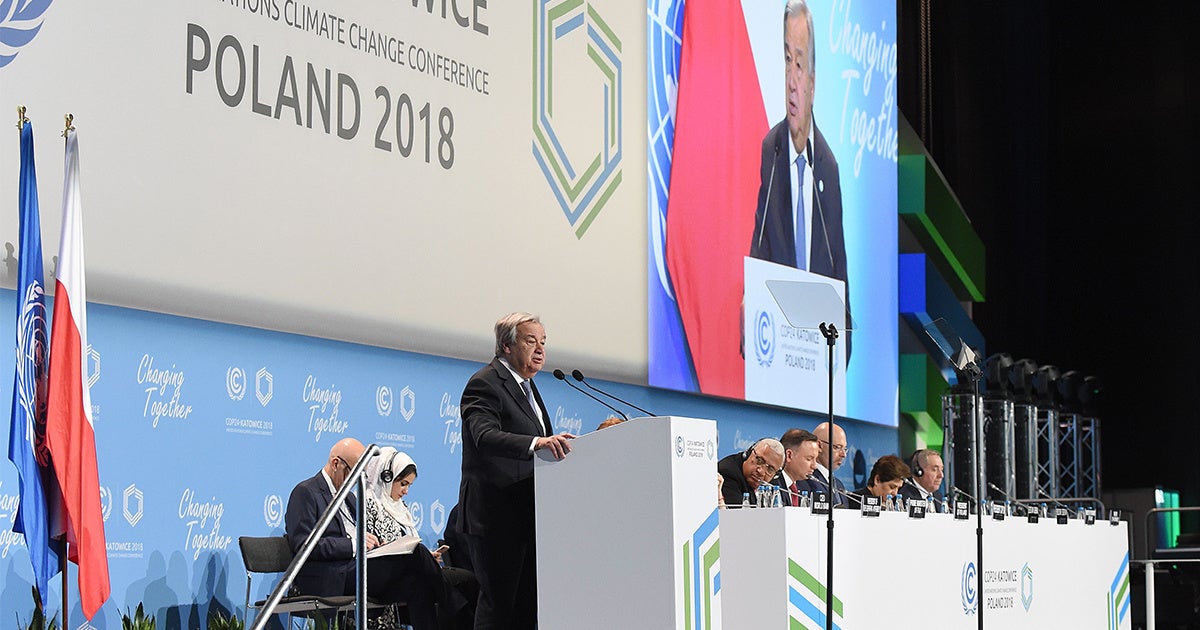 Negotiators in the climate talks that will decide the future of the Paris agreement began meeting a day early in Katowice, Poland on Sunday as pressure builds to take meaningful global action against climate change, BBC News reported.

The 24th session of the Conference of the Parties to the United Nations Framework Convention on Climate Change (COP24) is the first major international climate meeting since the UN’s Intergovernmental Panel on Climate Change (IPCC) issued an urgent report that world leaders have only 12 years to reduce greenhouse gas emissions to 45 percent of 2010 levels if they want to limit global warming to 1.5 degrees Celsius above pre-industrial levels. The Paris agreement set a goal of limiting warming to “well below” two degrees Celsius, and talks over the next two weeks will determine how the countries involved will move towards that goal.

“The world is at a crossroads and decisive action in the next two years will be crucial to tackle these urgent threats,” the presidents of the last four UN climate talks warned in a first-of-its kind statement Sunday. “The challenges are there, as are the solutions. We require deep transformations of our economies and societies to build a better world for all. This must be powered by multilateral cooperation.”

So far, the biggest commitment has come from the World Bank, which announced Monday it was doubling its investments in climate action to $200 billion for 2021 to 2025. The bank is for the first time earmarking $50 billion of that amount towards projects working to adapt to already occurring climate impacts such as drought and flooding.

“We are clearly the last generation that can change the course of climate change, but we are also the first generation with its consequences,” World Bank CEO Kristalina Georgieva told The Guardian.

While negotiators met early to get down to brass tacks, the main festivities kicked off Sunday with the arrival of a team of 40 cyclists who biked from Vienna under the banner of “Moving for Climate NOW” to promote renewable energy.

“I commend the cyclists involved in this bike tour for inspiring the world to move in the right direction to fulfil the promise of the Paris Agreement,” UN Climate Change Deputy Executive Secretary Ovais Sarmad said in a press release. “This is the most important COP since the signing of the agreement, and we need initiatives like yours to testify that governments, the private sector and individuals can work together to tackle climate change by committing to multilateralism.”

Despite the urgent words of participants, however, there is concern from activists that the talks could be undermined by their location, a coal-mining town in a country that generates 80 percent of its energy from the fossil fuel that the IPCC said must be phased out by 2050 to prevent catastrophic warming. Poland has even allowed two coal companies to sponsor the talks.

“Having major coal companies as climate summit sponsors sends the worst possible signal at the worst possible time,” Greenpeace‘s director in Central and Eastern Europe Robert Cyglicki told The Guardian. “It would be like Philip Morris sponsoring a health summit where a cigarette ban is supposed to be agreed. We will know this was a successful summit if coal companies regret sponsoring it.”

At the global #ClimateChange convention our host, Poland, greets us with a shrine of ACTUAL coal ????

This year the #UNFCCC event is sponsored by coal companies in a country that generates 80% of electricity from coal ?

An insult to everyone who cares about the planet #COP24 pic.twitter.com/ng7HuWIm1Y

Another concern is the role that the U.S. delegates will play. While President Donald Trump has vowed to withdraw from the Paris agreement, he cannot actually do so until 2020, so the U.S. must still participate in talks. U.S. participants have not interfered with the process itself, BBC News reported. But at the last COP event, the White House was criticized for organizing a side event promoting fossil fuels, and reports indicate they will do so again at the Katowice talks.