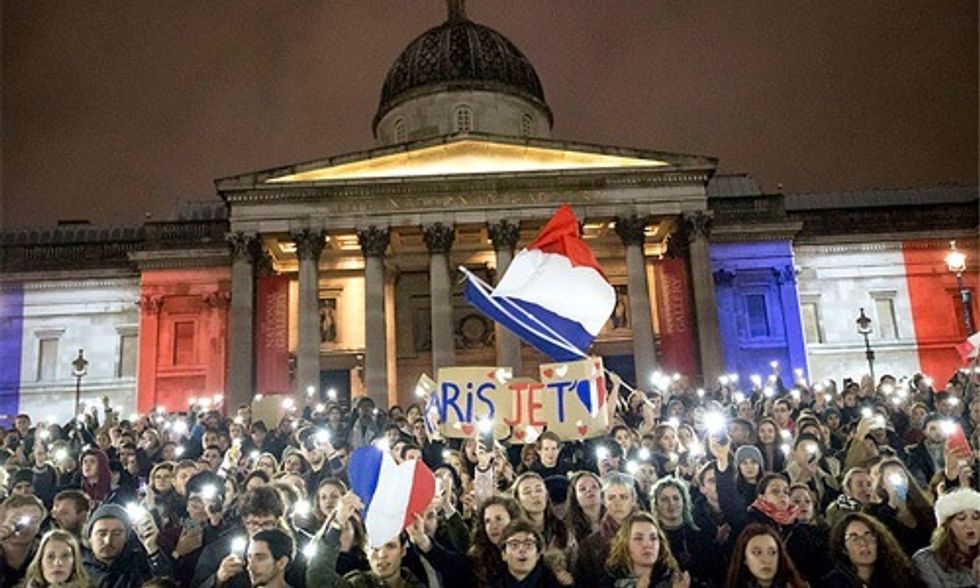 The rest of the world quickly showed its solidarity with France by lighting up many landmark monuments with the colors of the French flag. These also represent its values: blue for liberty, white for equality and red for fraternity.

However, these horrific, barbaric acts cannot deter all those who uphold France's universal values. And we certainly cannot counteract these violent acts by destroying the Islamic State of Iraq and Syria (ISIS) as suggested by President of France François Hollande. This will only breed more hatred and violence, and will not address some of the root causes that led to the rise of ISIS.

ISIS terrorists also targeted Russia and Lebanon in the last month. With more than 80 country leaders coming to Paris in two weeks, the upcoming UN conference on climate change (COP21) is a perfect opportunity to send out a loud and clear message: terrorist attacks like Friday's are unacceptable and the rest of the world is working together to make it better. Though French Prime Minister Manuel Valls announced that COP21 will be limited to its core talks, (there will unfortunately be no major public demonstrations or concerts), we should not stop the current societal, financial and political momentum for a global deal on climate change. Indeed, a vision of a more sustainable world has never been so palpable, so possible or so present.

A recent scientific paper suggests that climate change exacerbated global conflicts in Syria: “There is evidence that the 2007−2010 drought contributed to the conflict in Syria. It was the worst drought in the instrumental record, causing widespread crop failure and a mass migration of farming families to urban centers. We conclude that human influences on the climate system are implicated in the current Syrian conflict.” And since current reports indicate that the "Paris Attacks" perpetrators belonged to ISIS, we should not dismiss this consequential link.

Therefore, this should give us more reason to make COP21 a success by signing a global deal on climate change. This will not only provide a framework to help solve the environmental crisis of our time, but it will also attack this "super wicked threat multiplier" at its root.

We must fight terrorism on all fronts. We cannot ignore the difficult, complex geopolitical causes that lead to such senseless attacks. The root causes are multiple and interlinked, but we must not forget that to eradicate it, climate change may be one of them.

These horrifying terrorist attacks happened very closely to the start of the COP21, perhaps to deter people and global leaders from coming to Paris. However, COP21 will and must go on, and it is our duty to make it a success.

And hopefully, the light, the love and the humanity that Paris is famous for will overcome the dark, deadly and destructive forces that resulted in last week’s atrocious acts.