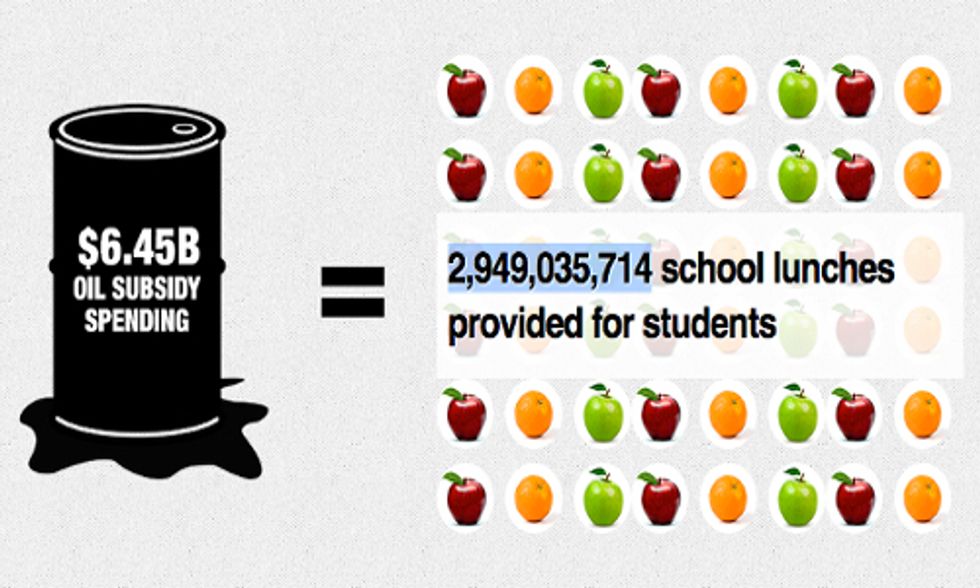 As the new Republican-led Congress gets underway, we're hearing a lot of rhetoric about cutting the social safety net programs that throw a lifeline to those in need and help people climb out of poverty—things like food assistance, free school lunches and Pell Grants that pay for college. And while some in Congress have ripped the veil off their underlying meanness, saying that giving any assistance to those in poverty makes them "dependent" and "lazy," many are still hewing to the party line that they're just too expensive.

What else could we do with money we give away each year to fossil fuel interests? Image Credit: Big Oil Giveaways

"What's the tradeoff for your tax dollars?" it asks. "Each year, billions of dollars do not make it to the U.S. Treasury, but rather stay in the pockets of the oil and gas industry in the form of subsidies and tax breaks. Millions more are wasted on special handouts for Big Oil. Find out some of the things those revenues could pay for."

Big Oil Giveaways lets you do just that. You can select from among five lucrative subsidies and tax breaks given to oil and gas companies and then learn what it could be paying for if it were redirected to ten other programs. Find out what accounting tricks like the percentage depletion allowance and the intangible drilling cost deduction, tax breaks like the manufacturing tax credit and money allocated to the government fossil fuel research and development program are diverting from uses that would benefit far more people.

For instance, you can learn that the annual $2,480,407,500 lost by allowing gas and oil companies to drill without paying royalties could fund 1,143,044,931 school lunches. It could provide health insurance for 2,120,066 children or health care for 837,976 veterans. With that amount, 432,881 students could receive a Pell Grant to help them attend college. And it could pay the salaries of 41,977 epidemiologists for a year, which would have been a better approach to containing ebola than scaring the pants off everyone. And all five special breaks for Big Oil and Gas could together pay for 2,949,035,714 school lunches. That's a lot of children who aren't too hungry to focus on their education.

The tool is sponsored by Friends of the Earth, along with 13 other organizations including Public Citizen, Institute for Policy Studies, Interfaith Power & Light, Rebuild the Dream, Physicians for Social Responsibility, People for the American Way, Peace Action, Oxfam America, Labor Network For Sustainability, Green for All, Corporate Accountability International and Oil Change International.