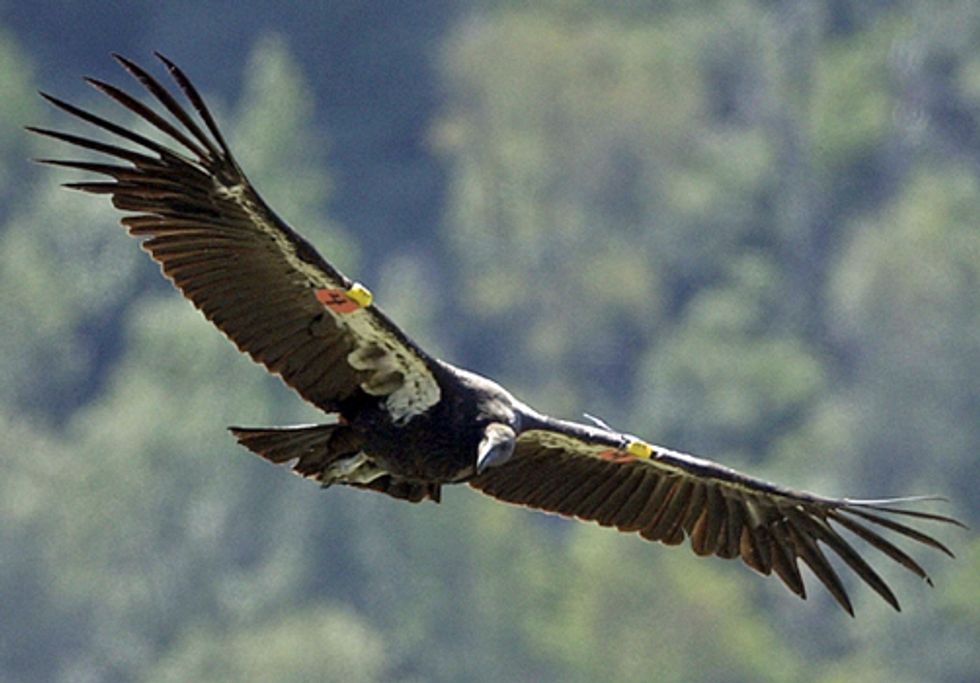 A controversial wind-energy project threatening endangered California condors and golden eagles in California is the target of a federal lawsuit filed today by the Center for Biological Diversity, Defenders of Wildlife and the Sierra Club against the U.S. Department of the Interior’s Bureau of Land Management (BLM).

Before turning to the court, the conservation groups met several times with the developer, asking that the some 100-turbine North Sky River wind project be redesigned to avoid known environmentally sensitive areas in the southern Sierra Nevada Mountains and to include measures to reduce harm to at-risk bird species. However, the project is proceeding without these necessary changes.

Sprawling across more than 12,700 acres, the project’s alarming potential for impacts to rare and endangered species prompted warnings from the U.S. Fish and Wildlife Service and the California Department of Fish and Game in letters to Kern County supervisors, who approved zoning changes to accommodate the project. The North Sky River project is sited next to another wind farm—Pine Tree—that has a history of bird kills, including at least eight federally protected golden eagles in just over two years. The environmental review of the North Sky River project documented more than 50 golden eagle sightings and 14 nests within just 10 miles of the proposed site.

In August 2011, the Fish and Wildlife Service wrote: “The first full year of fatality monitoring [for the Pine Tree Wind project] resulted in an estimated 1,595 fatalities per year, which per megawatt (11.8 fatalities/megawatt) is among the highest fatality rates being recorded in the nation…It’s reasonable to estimate that the proposed [North Sky River] project would have avian fatality rates equal to or greater than those observed at the adjacent Pine Tree Wind Facility.”

Additionally, the California Department of Fish and Game said the “combination of highly suitable habitat features on site, the known historic condor occurrences in the area, and recent condor activity nearby lead the Department to conclude that Condors will utilize the Project area in the near future and be at risk from turbine strikes.”

The conservation groups are concerned that the BLM discounted these dangers to rare and endangered species in granting the developer, NextEra, permission to build a new transmission line and improve an access road to the proposed site across public lands. The groups’ lawsuit contends that the BLM violated federal law by focusing only on the threats from the power line and road, while entirely ignoring the expected harm from the massive wind development itself. The groups are asking the court to stop the project and require the BLM to complete a thorough review before allowing construction to move forward.

The groups have a successful track record of working with renewable-energy developers to reduce threats to wildlife and the environment, facilitating the permitting of some 2,600 megawatts of clean energy since 2010. But unlike the many renewable energy developers who have modified their projects to lessen harm to wildlife, NextEra has failed to change the North Sky River project to sufficiently reduce the risk to condors, eagles and other bird species.

Following are statements from representatives of the conservation groups presenting the lawsuit:

“NextEra Energy and the Bureau of Land Management have thrown caution to the wind with the North Sky River project by ignoring the evidence of high rates of birdkills at the nearby Pine Tree wind energy project,” said Kim Delfino, California program director for Defenders of Wildlife. “NextEra had the opportunity to reconfigure the project to reduce the risk to endangered California condors and golden eagles. We’ve been left with no alternative, but to resort to legal action to prevent further harm to one of rarest animals in the country.”

“BLM shirked its responsibility to fully evaluate impacts to California condors and other rare species from the North Sky River project,” said Ileene Anderson, biologist with the Center for Biological Diversity. “Properly sited and designed wind energy can be implemented without unnecessarily killing off rare birds and bats.”

“Building another poorly designed wind project adjacent to one that’s under investigation for numerous eagle deaths just doesn’t make sense,” said Barbara Boyle, Sierra Club senior representative in California. “This project is right in the pathway of California condors moving back into their historic range in California. There is a better way—we need to locate these projects where they will pose fewer risks and have a better chance for success.”

Defenders of Wildlife is dedicated to the protection of all native animals and plants in their natural communities. With more than 1 million members and activists, Defenders of Wildlife is a leading advocate for innovative solutions to safeguard our wildlife heritage for generations to come. For more information, visit www.defenders.org.

The Center for Biological Diversity is a national, nonprofit conservation organization with more than 350,000 members and online activists dedicated to the protection of endangered species and wild places.For more information, visit www.biologicaldiversity.org

The Sierra Club is America’s largest and most influential grassroots environmental organization with more than 1.4 million members and supporters nationwide.  In addition to creating opportunities for people of all ages, levels and locations to have meaningful outdoor experiences, the Sierra Club works to safeguard the health of our communities, protect wildlife, and preserve our remaining wild places through grassroots activism, public education, lobbying and litigation. For more information, visit http://www.sierraclub.org.