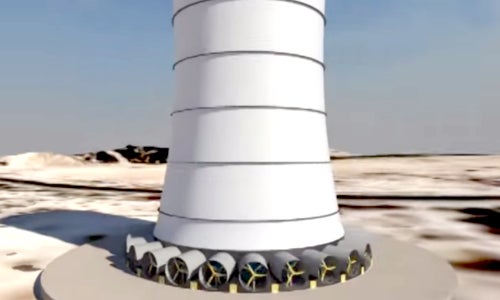 The tallest structure in North America will be constructed at the U.S.-Mexico border, and guess what—it will generate two types of renewable energy.

Annapolis, MD-based Solar Wind Energy is planning on building a $1.5 billion Solar Wind Downdraft Tower near the border. Aside from its plans to make the tower about 800 feet taller than the Chicago building once known as the Sears Tower, the company says the structure will be the energy market’s first-ever technology to blend wind and solar energy.

“It also has the ability to be operated with virtually no carbon footprint, fuel consumption, or waste production. It generates clean, cost effective and efficient electrical power without damaging effects.”

The City of San Luis, AZ approved the company’s construction that will span more than 600 acres in the city, according to the Phoenix Business Journal. Solar Wind Energy settled on San Luis after evaluating several cities for about two and a half years. Its first project, the tower’s construction will begin in 2018.

“The San Luis site was selected, in part, by utilizing our recently announced proprietary software which can accurately calculate and predict energy production 24/7 given local weather data,” CEO Ron Pickett said. “By feeding the weather data into the program, the outcome dictates the optimum size of the tower’s dimensions as well as its financial performance. “As a result, Solar Wind Energy deemed this location as prime for a tower project.” 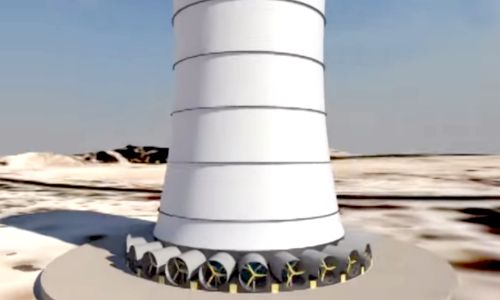 This rendering from a company video provides an idea of what the Solar Wind Downdraft Tower might look like when it is constructed in the coming years. Video screenshot: Solar Wind Energy Tower

The tower would be capable of producing an average 435 megawatt hours in a year, Pickett told Bloomberg, but that amount could triple during July and August. The company plans on licensing the process to developers who could deploy it in other areas like Africa, Australia or “you can throw a dart in the Mideast, and it works there,” he said.

“This is a game-changer in certain areas—hot, dry climates,” Pickett said.

Here’s a brief description from Solar Wind Energy on how it works:

“A series of pumps deliver water to the Tower’s injection system at the top where a fine mist is cast across the entire opening. The water introduced by the injection system then evaporates and is absorbed by hot dry air which has been heated by the solar rays of the sun. As a result, the air becomes cooler, denser and heavier than the outside warmer air, and falls through the cylinder at speeds up to and in excess of 50 mph. This air is then diverted into wind tunnels surrounding the base of the Tower where turbines inside the tunnels power generators to produce electricity.