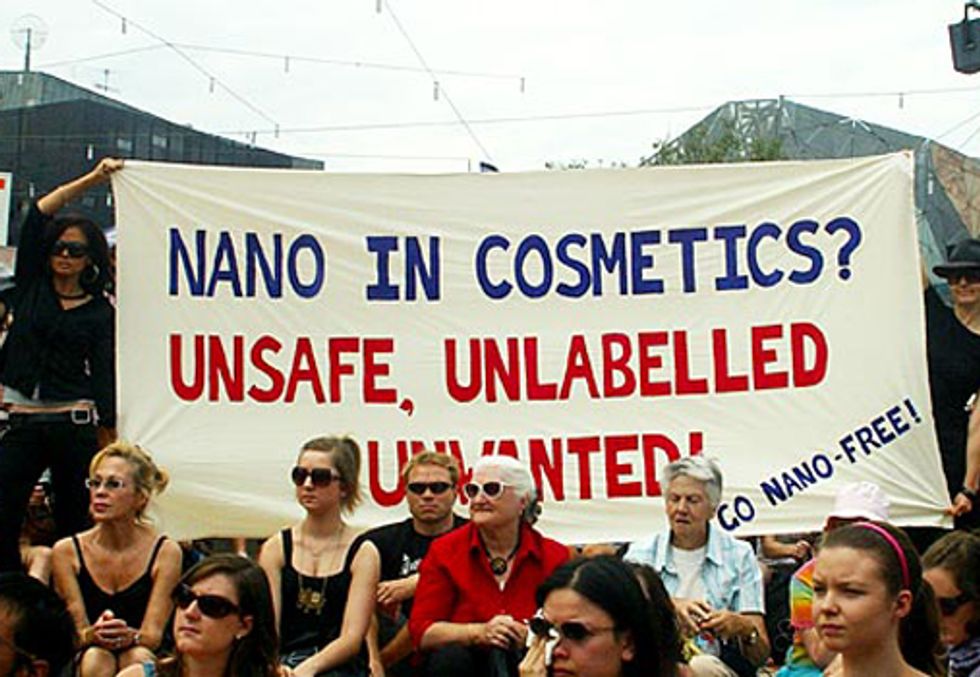 Nanotechnology is a powerful platform technology for taking apart and reconstructing nature at the atomic and molecular level. Just as the size and chemical characteristics of manufactured nanomaterials give them unique properties, those same properties—tiny size, vastly increased surface area to volume ratio, and high reactivity—can also create unique and unpredictable health and environmental risks.

The lawsuit demands FDA respond to a petition the public interest organizations filed with the agency in 2006, nearly six years ago. The coalition is led by the International Center for Technology Assessment (ICTA), on behalf of fellow plaintiffs Friends of the Earth, Food and Water Watch, the Center for Environmental Health, the ETC Group and the Institute for Agricultural and Trade Policy.

"Nano means more than tiny. It means materials that have the capacity to be fundamentally different. Yet more and more novel nanomaterials are being sold infused into new consumer products every day, while FDA sits idly by," said George Kimbrell, ICTA attorney. "The agency's unlawful delay unnecessarily places consumers and the environment at risk."

The eighty-page petition documents the scientific evidence of nanomaterial risks stemming from their unpredictable toxicity and seemingly unlimited mobility. The 2006 petition requested that the FDA take several regulatory actions, including requiring nano-specific product labeling and health and safety testing, and undertaking an analysis of the environmental and health impacts of nanomaterials in products approved by the agency.

Nanomaterials in sunscreens, one of the largest sectors of the nano-consumer product market, were also a focus of the action. The petitioners called on the agency to regulate nano-sunscreens to account for their novel ingredients rather than assume their safety, and to pull such sunscreens from the market until and unless the agency approves them as new drug products.

"Year after year goes by but we have yet to see the FDA do the bare minimum and require nanosunscreens to be labeled as such. This is a basic consumer right," said Ian Illuminato of Friends of the Earth. "We're well past the 1800s—nobody likes or should be forced to use mystery chemicals anymore."

Since 2006, numerous studies and reports, including agency publications by the U.S. Environmental Protection Agency, the Office of the Inspector General, and the U.S. Government Accountability Office, acknowledge significant data gaps concerning nanomaterials' potential effects on human health and the environment. Most troubling are studies using mice that show that nano-titanium dioxide when inhaled and when eaten can cause changes in DNA that affect the brain function and may cause tumors and developmental problems in offspring. One study found titanium dioxide nanoparticles were found in the placenta, fetal liver and fetal brain.

"It is unacceptable that the FDA continues to allow unregulated and unlabeled nanomaterials to be used in products consumers use every day," said Wenonah Hauter, executive director of Food & Water Watch. "It is past time for this agency to live up to its mission and protect public health by assessing the health and environmental risks of nanomaterials, and to require labeling so that consumers know where these new materials are being used."

"The scientific consensus is that nanomaterials require specific testing to account for their novel capacities and potential risks. The FDA must do such testing as part of a pre-market safety assessment in a broader regulatory initiative to protect public health," said Steve Suppan of the Institute for Agriculture and Trade Policy.