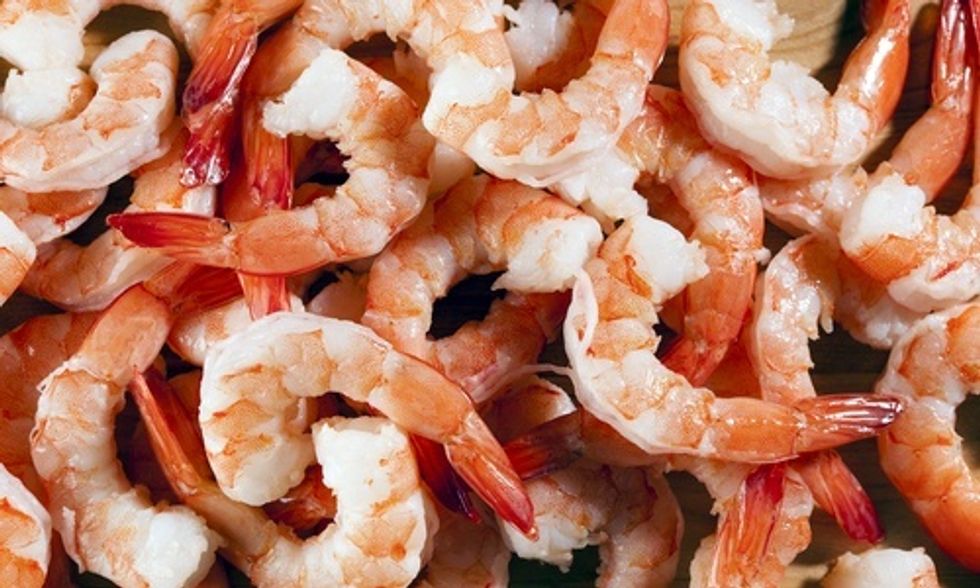 There are now more reasons to consider skipping your next shrimp cocktail. In a startling new Consumer Reports study, bacteria was detected in more than half the raw shrimp that was tested, with some also tainted with illegal antibiotic residues.

For the study, How Safe is Your Shrimp?, scientists analyzed 342 packages of frozen shrimp—284 raw and 58 cooked samples—purchased at Albertsons, Costco, Fry’s Marketplace, Hy-Vee, Kroger, Sprouts Farmers Market and Walmart in 27 cities across the U.S.

The study found that 60 percent of raw shrimp tested positive for bacteria, including salmonella, E. coli and listeria. In seven raw shrimp samples, scientists detected the antibiotic-resistant superbug MRSA, or Methicillin-resistant Staphylococcus aureus, that could potentially lead to a dangerous infection.

America's demand for our favorite crustacean is causing a sea of trouble here and abroad.
Photo credit: Shutterstock

The country currently consumes about three times more shrimp than it did 35 years ago, with the average American chomping down nearly 4 pounds of shrimp per year. While the crustacean is clearly America's favorite seafood, most of the country's supply comes from faraway countries such as India, Indonesia and Thailand, where shrimp is squeezed into industrial tanks or shallow, man-made ponds where they're fed commercial pellets, sometimes containing antibiotics to ward off disease, the study pointed out.

“Bacteria and algae can begin to grow and disease can set in, prompting farmers to use drugs and other chemicals that can remain on the shrimp and seep into the surrounding environment,” said Urvashi Rangan, Ph.D., executive director of the Consumer Reports Food Safety and Sustainability Center, in the report.

Not only is there the possibility of bacteria and viral infections swarming in these Asian shrimp farms, a recent investigation from the Associated Press revealed participation of forced labor from Burmese migrants in Thailand’s shrimp processing chain.

The graph shows 284 samples of raw shrimp purchased at stores around the country. The last column shows the percentage of samples that contained at least one of the following bacteria: vibrio, staphylococcus aureus, E. coli, listeria or salmonella. Photo Credit: Consumer Reports

Consumer Reports is calling on the federal government to make shrimp safer to consume. The organization pointed out that it's the Food and Drug Administration (FDA) job "to inspect shrimp coming into the U.S. to make sure it doesn’t contain any drugs or chemicals that aren’t permitted in imported shrimp."

"It is the FDA, not local retailers, that is charged with enforcing the law that prohibits importing shrimp containing antibiotics," Consumer Reports said. "According to the FDA, if those drugs had been detected in even one shrimp sample, the entire shipment would have been refused entry into the U.S."

So for your next trip to the grocery store, Consumer Reports recommends buying farmed shrimp raised without chemicals, including antibiotics. Seek out varieties that come from large outdoor ponds that mimic their natural habitat or in tanks that constantly filter and recycle water and waste, the report said.

You also want to be wary about anything labeled "organic," as "organic" seafood sold in the country is not approved by the U.S. government. (The U.S. Department of Agriculture is set to propose standards for organic seafood raised in the country this year).

“Even though most bacteria on shrimp would be killed during the cooking process, our test results raise real questions about how shrimp is raised, processed, and regulated,” Rangan said.

Watch: Not Even the FDA Knows What’s in Your Food